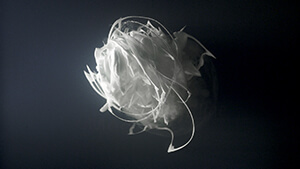 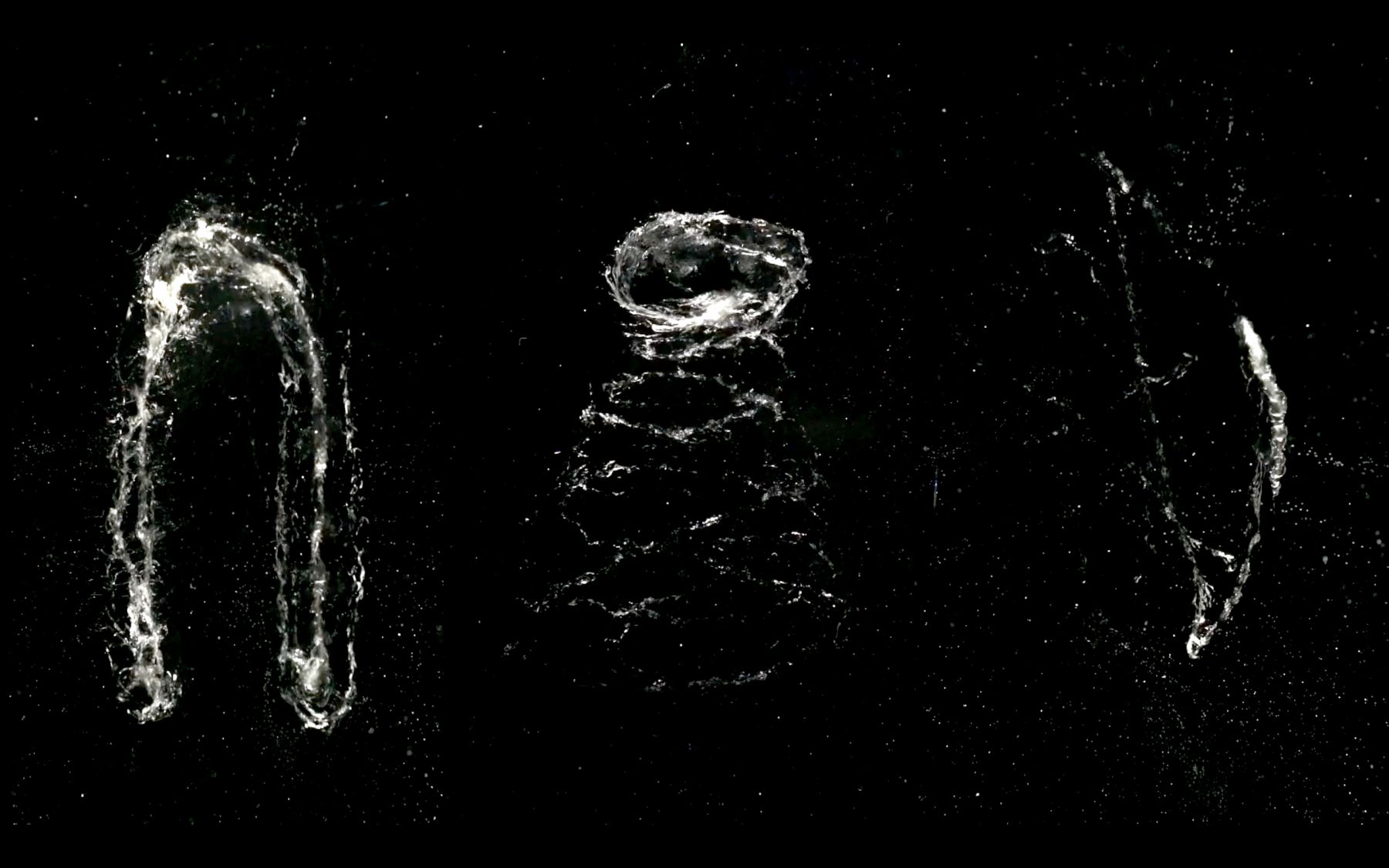 The fascination with fluidity and the potential and transience of materials came to  Norwegian visual artist Solveig Settemsdal as a dream. A dream about ‘a perfect luminous oval, hovering in a dark space, the most incredibly beautiful thing’. She thought about it so much that she saw it even when she was awake. ‘It did start me thinking about how to make lines or forms float in space, drawing in the air.’ Settemsdal told us. This can be felt in her piece Singularity (2016), a collaboration with composer and visual artist Kathy Hinde that won the first place in the Jerwood Drawing Prize in 2016.

Settemsdal works across mediums like sculpture, video, photography and drawing. She uses glycerol, a viscous liquid soluble in water; colourless, odourless, and non-toxic, to create liquid sculptures that explore fluidity and the materiality of aesthetics relations different materials. Singularity, a video that captured the process of what she was doing for the first time, is a hypnotic short film where she explores time and space through the movement inherent in her process of drawing. In it, she pushes the boundaries of drawing by using white ink suspended in cubes of gelatine instead of pen and paper. The result is a three-dimensional floating sculpture born from the merging of the two materials that change repeatedly and unexpectedly. The short film is set to Hinde’s musical compositions. Hinde has created for Singularity ‘a score for string quartet as well as building an instrument made from the insides of toy pianos, which is played by little robotic elements’, Settemsdal told us. Both Settemsdal and Hinde will be presenting Singularity during Cryptic’s Sonica Festival, Scotland’s major sonic arts festival that is coming to London 20 & 21 April 2018.

Settemsdal lives and works between London and Bristol and is currently studying an MFA in Sculpture at the Slade School of Fine Art. She has been selected for group exhibitions at Ars Electronica (Linz, Austria, 2017), Sonica at CCA (Glasgow, 2017) and the Drawing Biennial at Drawing Room (London, 2017). We met Solveig Settemsdal back in November when we invited her to perform the piece Recall/Reset (2017) at the event Disobey/Dystopia II, a night of music and visuals presented by Cluster Node in London. Recall/Reset (2017), her Slade Interim Show piece, consists in injecting a jet of water into glycerine. The result is a set of ephemeral drawings that resemble writing and figures in constant movement that float away as soon as they are formed.

Solveig Settemsdal investigates and explores the fluidity, density and consistency of the matter and doing so she builds a brand new visual language of ephemeral objects and symbols. In Settemsdal’s work, materiality, art and representation (always captured in HD video) firmly grasps the connection between the Aristotelian categorisation of “things”, the material or matter these things are made of and the form matter takes.  Her aim when looking into the future ‘is to join internal and external space somehow – where the solid architecture of our surroundings folds into the fluid realm of thought, their opposing time scales interchanging habits. 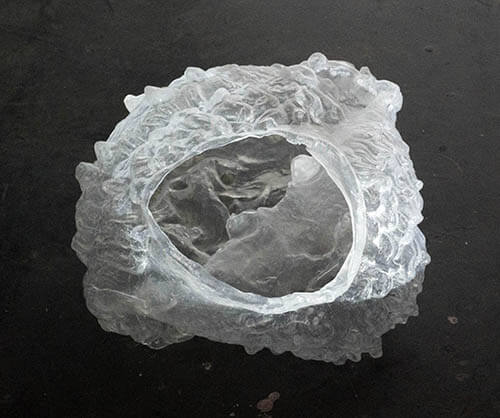 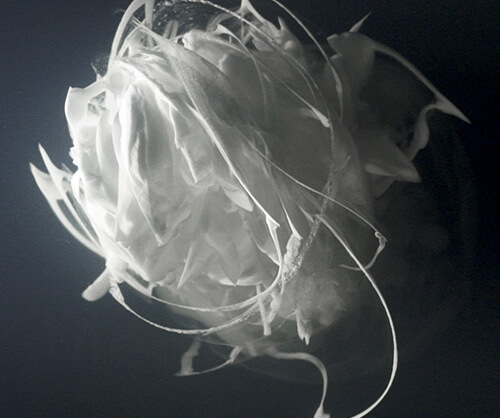 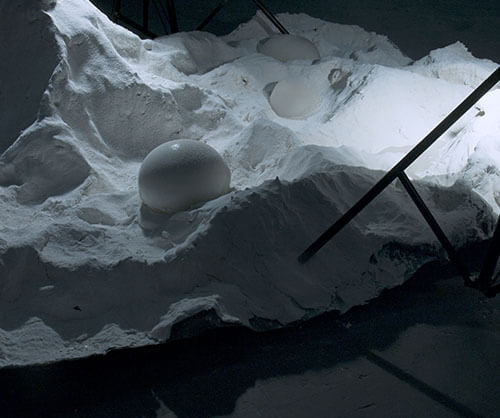 You are a multidisciplinary artist working across mediums including sculpture, video, photography and drawing. And your practice investigates fluidity and the potential and transience of materials, be it sculptural, geological or cognitive. How and when the interest in all these different disciplines came about?

Whenever I had a fever when I was a kid I had this same dream that used to terrify me. It was a perfect luminous oval, hovering in a dark space. It was the most incredibly beautiful thing. Slowly, slowly this object morphed, started sprouting tendrils, rotting, became this grotesque form, and then slowly morphing back again to this pure luminous form. I once thought about it so much I saw it when awake, and never had that dream again. It did start me thinking about how to make lines or forms float in space, drawing in the air.

I did my BA in painting in Glasgow, but couldn’t get the depth I wanted so started thinking about transparent things that could hold a line in a three-dimensional space.  I read Perdido Street Station, science fiction novel by China Miéville around this time and there’s this species called the Khepri where all the women are artists and the men are drones… the women secrete this stuff to make these transparent sculptures, like giant glass marble formations. I tried this resin and it was awful. I always played with my food and especially loved carving into jelly, so started experimenting with that and thought about ‘tattooing the air’ somehow – my partner works in a hospital so brought me a stash of syringes and started trying to draw into this stuff. It was a total mess at first. I got a camera to record this, an old Canon A1 35mm, as the gelatinous forms melted so quickly.

From there it was a process of a lot of experimentation with stills, analogue film- medium format, to getting a video camera and a macro lens and finally being able to communicate the movement and the generation of the forms.

Recall/Reset is your graduation Project at Slade School, could you tell us the intellectual process behind it?

Recall/Reset was my Slade Interim Showpiece. I wanted to make a drawing with hardly any memory – that would float away as soon as it was formed.  I’d been using glycerine for a while, and it has these incredible qualities; it’s clear as water but keeps the trace of your action. I made this instrument for drawing into it, with hoses and fuel pumps that send a fine jet of water into it. The surface becomes a liquid canvas. The visible line here consists of action causing a disturbance – catching light. This is captured through HD video and displayed as a three-channel installation. I wanted a spatial and solid companion to this and made effectively a massive sand pit in my studio, which was last summer separated into clean-film-liquid space and dusty-sculpture-dry space with these strange forms of solidified sand crawling out of it.

I found a material used to make model aeroplanes (very flexible yet strong) and poured it into the marble sand to make these forms, the same as those in the video – part symbol, pre-word, mostly denoting time and movement, from Hawking’s Illustrated History of Time in particular. These are balanced together in dunes of marble sand, and buried underneath is a speaker playing a hydrophone recording. This is a topographical scan of the sea floor I made floating from one side of the bay to another in my uncle’s wooden boat, me hanging over the side and the hydrophone dragging along the floor.

Singularity is an audiovisual collaboration with the artist Kathy Hinde (presented at Ars electronica 2017). In it, you explore a temporal and sculptural process of drawing in a fluid three-dimensional space by suspending white ink in cubes of gelatin which expand in the semi-solid. The concept of an expanding point is echoed in Kathy Hinde’s musical composition. What were the biggest challenges for the development of this collaboration?

Singularity was the first time I captured what I was doing on video. Kathy and I had been talking about it for a while and wanted to collaborate on this and we were delighted when the piece got commissioned by the Kate Romano from the  Goldfield Ensemble’s Ritual in Transfigured Time tour, which explores relationships between music and moving image.

The biggest challenge for me initially was needing to draw in someone’s company, as I couldn’t both draw and film at the same time.  I was then used to being totally self-sufficient so that was tricky – luckily my good friend and brilliant photographer Milo Newman was my studio neighbour and agreed to film it. It was pretty nerve-racking to shoot because all the conditions had to be absolutely ideal, so there was a lot of waiting around, late nights and for much of it I wasn’t sure we’d be able to do it. Milo was amazingly patient and finally, we got the take, at 44, after definitely stopping at 42. Kathy had the challenge of creating a score for string quartet as well as building an instrument made from the insides of toy pianos, which is played by little robotic elements, and then teaching someone to use it. She did an incredible job and her composition is a stunning balance between structure and randomness. The sound brings this epic feel and is so right – when I first heard Kathy perform I thought if my work had a sound it would sound like this, so was obviously very happy to collaborate with her.

What directions do you want to take your work into?

My work is now morphing into more elaborate installations between video and sculpture. I’m working on ways to activate physical forms into reactions that can happen in space, with those that can only happen via video.

My aim is to join internal and external space somehow – where the solid architecture of our surroundings folds into the fluid realm of thought, their opposing time scales interchanging habits. Recently I’ve been working on some figurative things, after getting a plaster bust from the British Museum to play with. The resulting work has begun to talk about access and power, how we access classical sculpture through contemporary technology, which is where I am at the moment.

I have a show of this work, Cavity Search, with three brilliant women; Charlie Cousins, Alicia Fidler and Amanda Rice, from my year at Slade Sculpture at the SET space in Bermondsey in March. My Degree Show is very much still in progress but is based around valves. Valves as portals, thinking about objects as consumer things, that you squeeze the meaning out of like shampoo bottles. It involves a trip to cast concrete Dinosaurs at Crystal Palace Park and building bridges to a lost world… come see it in June.

Not having the time, space or peace to think properly. London can be pretty distracting.

I am not afraid of the dark. Or of experimenting. Sometimes get things stuck in my head that I have to try that seem completely impossible. Sometimes I have to admit that they actually never will work, no matter how many times I try. Which is ok but it’s really hard to know when to fold.