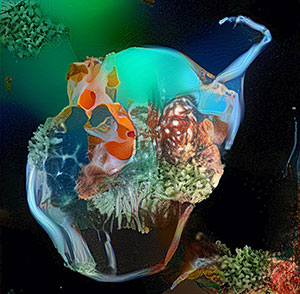 A few many decades ago, Tristan Tzara argued that to make a Dadaist poem, one only needs to take a newspaper, a pair of scissors, cut out an article, scramble the pieces into a bag, and then re-arrange the snippets of text in an unconscious way – the results, and here are you a writer, infinitely original and endowed with a sensibility that is charming though beyond the understanding of the vulgar. Creating a poem from an existing poem.

In the era of the digital, of data analysis and manipulation, of AI, AR and VR, Sofia Crespo argues that it is hardly likely that one will discover anything completely new – but it’s very possible to look at things in a new way. In a similar way in which the human brain can recompute and combine all the information it has, a data set can go through the same process and create something new by renewing the way in which it connects information.

Using technology and digital means as a tool, without getting caught in the digital wave or forgetting the human component, Sofia Crespo artistically and intriguingly weaves new worlds and beings. Her project Neural Zoo (2019) is a genuine 21st century Cabinet of Curiosities, in which we are able to recognise the textures used, but unable to pair them with any known physical being. This provokes a philosophical stand for the spectator, in which the question of reality gains new qualities – if you are able to recognise it, but not categorise it, is it part of your real-world or your imaginary one?

In Artificial Remnants (2018), Crespo follows the same idea of developing an ecosystem of fantastic beings, based on existing insects. The piece seems to go more towards the idea of a fake realism than earlier pieces, such as TraumaDoll – a psychedelic mix of colours, text and opinions, urging any spectator or reader to doubt the very existence of what they are seeing, or of the artist. Whereas TraumaDoll resembles more a dream-like state, a hallucinogenic rite of passage of a doll suffering from PTSD, Artificial Remnants could be considered a natural history exhibition, if it were to be held within a beautiful mind.

In an interesting posture between the human brain and the digital brain, between familiar and unfamiliar, between our known world and that hidden somewhere in an artificial deep-dream, Sofia Crespo tells stories with the charm of a Lewis Carroll – creating flora and fauna which seems to be able to live underwater, on land or in the air, the worlds by Crespo are so intriguing, so deliciously seductive that one cannot refrain from hoping they are tangible.

You are an artist working at the intersection of Biology and Technology. With a previous background in Art Direction, one of her main focuses is the way organic life uses artificial mechanisms to simulate itself and evolve. For our audience that’s not familiar with your work, how and when all these interests come about?

My work aims to visually understand the shapes of nature using new technologies such as deep learning. Working on Neural Zoo has led me to reflect on the meaning of creativity, the functioning of our visual cortex for pattern recognition, and the evolution of life in itself with its adaptations and challenges.

The fact that Neural Networks got abstractly inspired by the functioning of the visual cortex, led me to think about the flow of information in the creative process ie the way as a child I developed a phobia of jellyfish, which eventually became a fascination for the visual elements of the jellyfish and finally the focus of an artwork. I wondered if there’s a ‘dataset’ of human experiences in our brains, that we constantly filter through and rearrange, and that ‘rearranging’ of the elements into novel ones is what we refer to as creativity. No matter how hard I try, I can’t imagine a colour that I haven’t previously seen, but I can imagine combinations of the ones I have seen, similarly, a neural network can’t create something out of the blue from a dataset that hasn’t been fed to it but it can recombine elements from data that has been given to it.

One of your ongoing projects is Neural Zoo, could you tell us a bit about the intellectual process behind and the biggest challenges (technical or conceptual) you face for its development?

The idea behind Neural Zoo is extracting patterns that visually resemble the natural world while simultaneously not hiding that they are artificial, but making a certain essence of “nature-ness” explicit to the person who views it. It was hugely inspired by The Codex Seraphinianus (1981) from Luigi Serafini, and ‘Parallel Botany’ (1976) from Leo Lionni, and partly the goal was to see how these topics would be reinterpreted using technologies that weren’t available before. What emerged from the process is an ever-expanding number of specimens, inhabitants if you please, of the Neural Zoo.

Technically, the biggest challenge is managing to process data in a coherent way, especially when the data is 3D models. This has required learning and developing new ways of managing data in itself, something that can feel far removed from the artistic at times. On a more conceptual level, one of the challenges has been to remain explicitly aware of what biases we subconsciously inject into the process of creating datasets/picking particular subjects and topics: how do we remain aware of our preferences and their influence on the result? How do we avoid the nature-ness be a purely human construct, but rather one that has space for the non-human?

Could you tell us a bit more on the latest developments of your research on artificially-intelligent creative systems?

For the past year, I have been wanting to work with generated 3D meshes, using neural networks, in order to see geometries and observe patterns in a way that resembles more the anatomical or physical form of the creatures: allowing the specimens of the zoo to inhabit three full dimensions of space. Fortunately, I got to meet Dark Fractures, and together we’ve been exploring this for our current exhibition of Artificial Remnants 2.0. This project is a combination of generative 3D insects, colour 3D printing and generative text.

Do you see AI more as a tool or as a creator?

AI is a tool, at least in my practice. Even if there were to be an autonomous ML artist, it would still have to have been made by a human or a team of humans. It is human beings who consume the art, who feel emotional about images, or sounds, no matter if they are generated or handmade by others. Art is as human as our emotions are.

AI, machine learning, Google Magenta…, are transforming society and the creative application of these tools open new possibilities in artistic creation; how do you think new inventions (like this) are impacting the landscape of art?

They’re immensely impacting it because they’re tools that weren’t there before, meaning we get to create new things and re-examine what already has been done with new, neural, eyes. At the same time, we get to connect with new topics and questions about the nature of our perception, the way we process information, and the digitalization of our world.

From the generative aspect, these new instruments let us create so much variety of shape and sound, artistry in itself feels like is being reinvented or maybe not reinvented at all. Maybe we’re just doing the same thing we’ve always done: find something around us that calls our attention and give it new form. What differs now is that these tools enable us to explore variety at a scale and magnitude that before just wasn’t feasible for anyone artist, creating a rich raw material in the generative.

Fear, maybe mainly the insecurity that I don’t know a tool technically well enough to create with it. Fortunately, another part of my mind ends up overriding it most of the time, but I’ve also let it win a lot in the past!

My plants, the Sun, being challenged, loving and feeling loved. Exploring new ideas, topics, and fields of study.