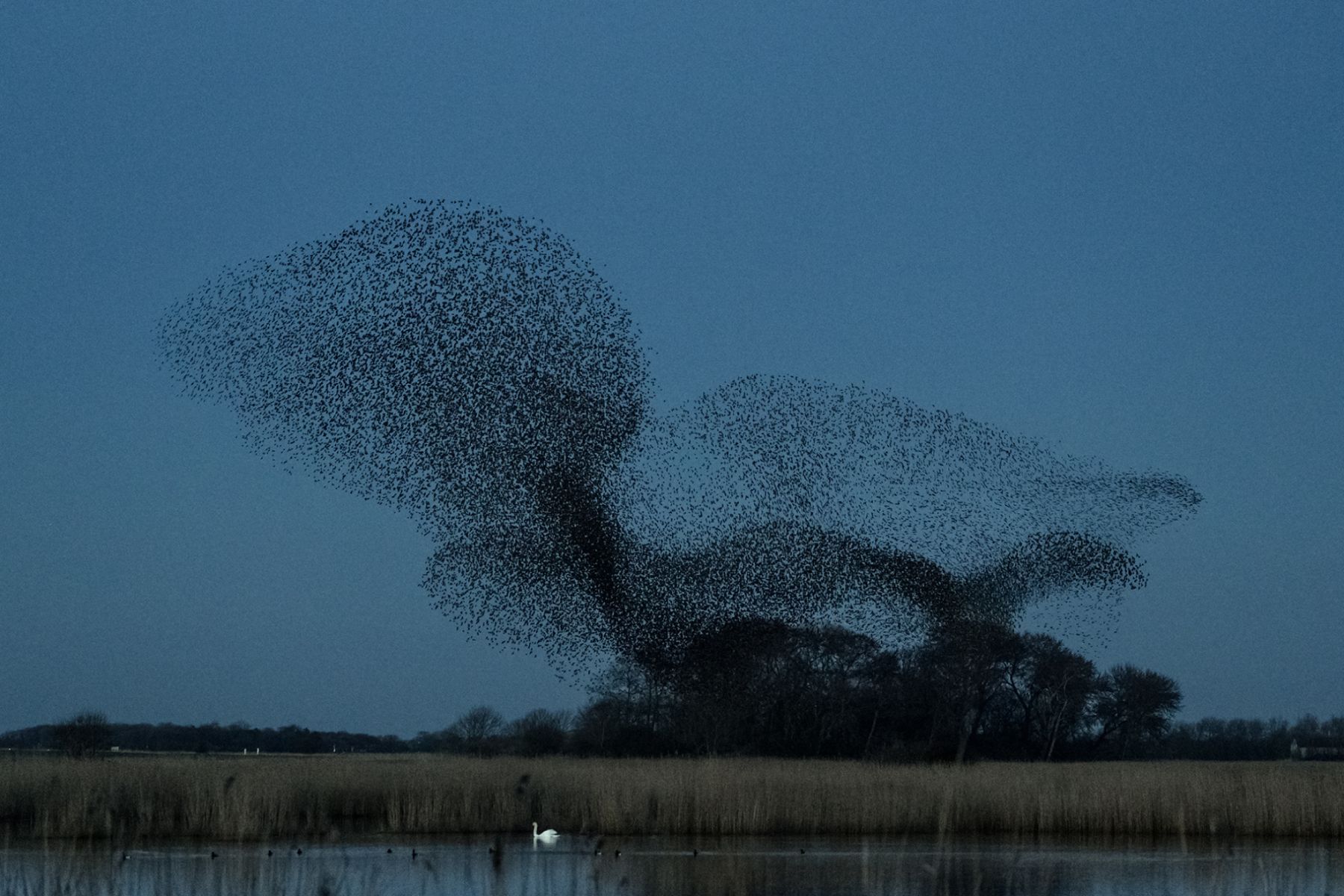 It came to him in a vision. Or perhaps it was more of a memory. A large flock of birds, grouped together in a dense, dynamic cloud of black and white, shifting from one formation to another: at one moment, a landscape; at other secret messages written in the sky; at another, still a glimpse of the universe and its specks of stardust.

Danish photographer Søren Solkær sed to capturing the faces of some of the world’s most famous celebrities – from Amy Winehouse to David Lynch to Adele – now Solkær has taken a break from portraiture, turning his talented, meticulous hand to birds. The project proper began five years ago, but Solkær has been subconsciously working on this series for more than 40 years.

Solkær first witnessed the captivating murmurations (the name given to a large flock of travelling starlings) on the marshlands of his homeland of Denmark. The birds were self-organising in an attempt to defend themselves against a looming predator. In doing so, they began winding this way and that in the sky, leaving ink-like traces as they flew. This vision left a mark on the photographer, drawing his mind’s eye to the image repeatedly, eventually finding a way to capture them on camera. In his abstract about the series, the artist describes this natural happening as “one of nature’s most spectacular phenomena.

Black Sun is a departure in style and subject from his previous pieces, especially in his use of natural light and the elements. Still, Solkær outlines that there remain some fundamental overlaps. The artist is deeply bound to his work, putting his being into what he does, and this carries across from his portraits to this latest series. He states: I try to put my soul into everything I do – and hope it shines through.

Solkær plans to continue this project indefinitely, perhaps expanding the horizons of his newfound love of nature photography to fireflies and other flying marvels. Solkær took some time out of his busy schedule travelling the world and immortalising contemporary legends to tell CLOT about the inspirations for this series and the deeply personal roots of its origin.

What would be your “Søren Solkær for Dummies” opening lines for those who aren’t already familiar with your work?

Danish photographer who is known for his iconic photographs of people like David Lynch, Patti Smith, Björk, Adele, Pharrell, Amy Winehouse, Paul McCartney and many others. Now he photographs birds.

You have just finished your most recent series Black Sun, a representation of the murmurations of starlings and a departure from your usual style and subject matter. What first drew your attention to these formations, and when did you decide you had to capture them in a series?

In 2017 I was working on a 25-year retrospective portrait book and exhibition at Frederiksborg Castle, the National Portrait Collection in Denmark. I was going through all my portraits for a year and decided I wanted to do a new project that was not about portraiture.  The first thing that came to my mind was an image of a big flock of starlings I had seen flying in intriguing formations as a ten-year-old. So I decided to go to the Wadden Sea on the Danish West Coast, where starling murmurations occur in spring and fall. Initially, it was all about practicalities like locating the birds and learning about their behaviour. On the seventh night I was there; I witnessed a large flock of starlings getting attacked by a peregrine falcon. The shapes and formations the flock created to scare off the attacking bird of prey, blew my mind. Beautiful, dramatic and resembling a Japanese ink drawing or a piece of calligraphy. For the next two years, I spent time my time in that area whenever the birds were there. After the second year, I started following the birds as they migrated south and west and thus expanded the project to five other countries: Germany, The Netherlands, Italy, Spain and the UK.

There seems to be something very personal about this project in that you first experienced these murmurations as a child in your home country of Denmark and have been photographing the birds in your adulthood for over five years (and plan to continue). Is this how it feels to you?

Yes. I’ve been photographing since the mid-nineties. This is the first project that takes me back home. I feel deeply connected to the landscape I grew up with.

Are any there other natural occurrences that fascinate you like this that you can see yourself documenting similarly, or was this specific to the starling murmurations?

I have recently looked into fireflies, bioluminescent plankton and Australian budgerigars. But I need to figure out where I am headed next.

Is there any overlap between what you´re doing in this project and the photographic work you’re best known for (i.e. your portraits of well-known musicians)?

I put my soul into everything I do. I also create something unique and visually striking. This project differs significantly from my portraiture. However, there is a resemblance to my early portrait project, Souls, where I photographed yogis in open-eye meditation on a mountain top in India.

What’s your photographic system/technique for this series, and how does it differ from your usual portraiture practice?

It varies significantly from what I usually do. I typically work with artificial lighting as my most important tool. I also work with locations, staging and a great degree of control. Black Sun is a documentary project at its core – I photograph something without changing it. I have to let go and be humble and patient – in that way, the project is a great teacher. Black Sun is shot all handheld with natural light.

The way you’ve treated the colour-grading and texture of the images gives them a sense of timelessness – also the fact that you haven´t included any contemporary landmarks. Was this part of your desire to capture and communicate “eternity”, as you put it?

The visual expression I have aimed at is pure and organic. I have inspired calligraphy and Japanese ink drawings. I choose a monochrome colour to highlight the graphic shapes. I print the images on handmade Japanese paper to give them tactile.

You made videos as well as still images. How important is the sound for you, and do you think this translates to the still images?

I started doing videos. They convey the experience of a murmuration more 1:1. The sound is a surprise. It is loud. The images have a more substantial metaphorical and poetic power.

It is a direct translation of the Danish name for a starling murmuration: Sort sol. It refers to many blocking out the sky so the sunlight disappears. Like during a solar eclipse.

Coffee and my daughters.