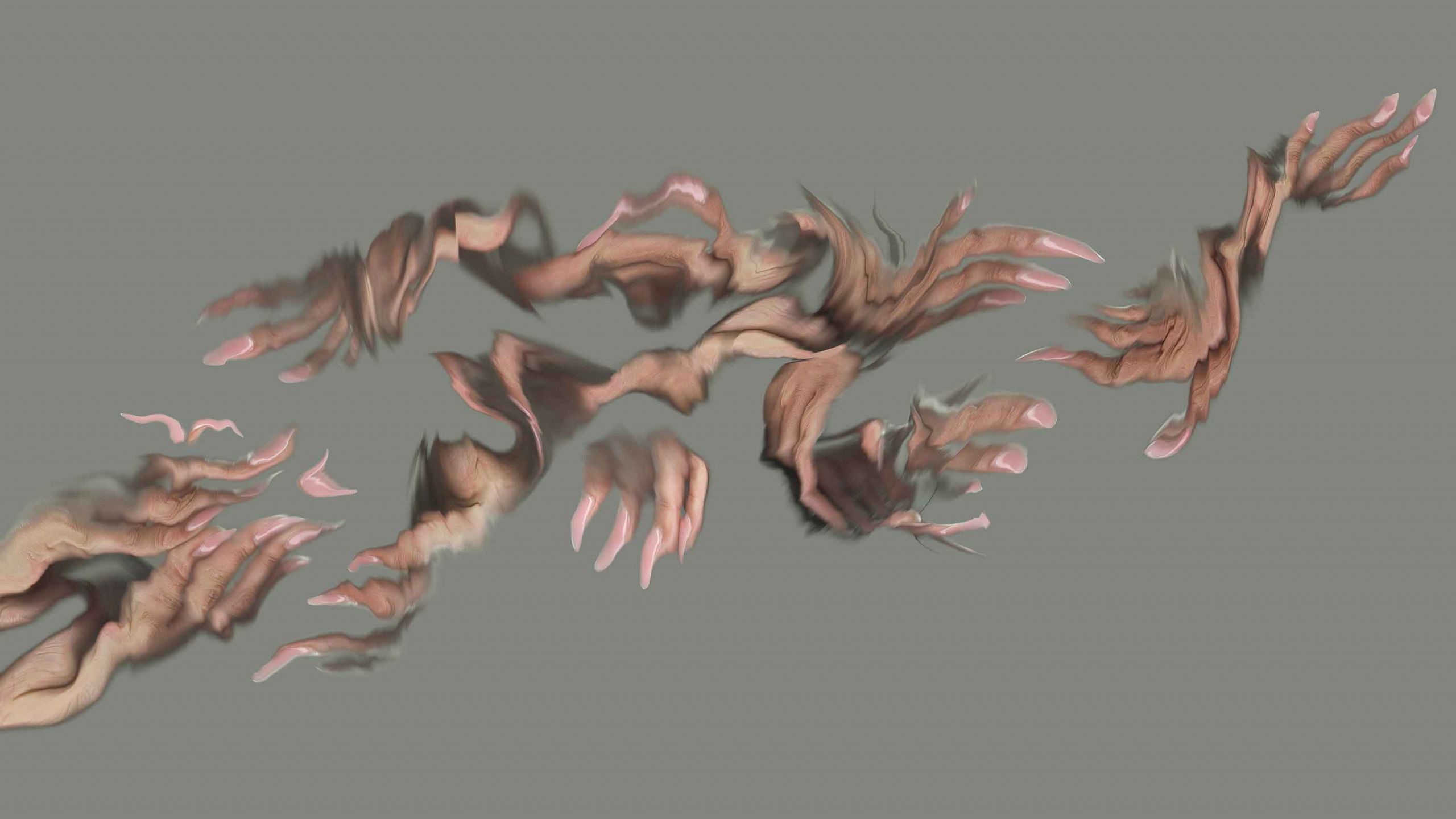 Berlin-based artist Tim Roth is as multifaceted as they come and is about to release his first album You’re Trouble, under the new alias Sin Maldita. Out November 27th, it’s released on Unguarded, a label the artist himself runs together with long-time collaborator Philipp Hülsenbeck. Roth has previously released two oneiric ambient albums under the name of 1k Followers, titled Unthreatening Auras (2019) and Spinning Faster Than The Room (2020).

In contrast, You’re Trouble takes cues from experimental club music and is an infernal, androgynous avant-garde pop. One can find traces of the oneiric soundscapes that reminiscence of his previous works but it is definitely a darker, ardent sound. The new album is all about contrast; it seeks to strike an uncanny chord between abrasiveness and accessibility to tap into jagged, chaotic, beautiful and at times, humorous emotions and spaces. It has no genre and no boundaries; in it, Tim Roth explores his new musical identity Sin Maldita and allows it to express itself fluidly. It takes the listener on a journey at varying speeds, juxtaposing beauty, serenity and vigour with instability, ugliness, chaos and crisis.

Roth is very embedded and active in Berlin’s experimental electronic scene, collaborating with an array of artists on different projects, from album productions and audio-visual pieces to multidisciplinary performances. He has worked with artists like Jungstötter, P.A. Hülsenbeck and Amnesia Scanner, for whom he worked on the sound design for the acclaimed ANESTHESIA SCAMMER a/v performance at Kraftwerk. Commissioned by LAS, and on the occasion of Refik Anadol’s Latent Being exhibition at Kraftwerk Berlin, it consisted of three acts incorporating narrative, music, video, animatronics and AI (Artificial Intelligence) poetry. Currently, he is also busy working with artist Eliza Douglas, creating music for the upcoming performance with Anne Imhof at Palais de Tokyo, Paris.

Another collaborator is Petra Hermanova, who has created the video for Me Me Me, the song that opens the album and is its first single. It’s the most pop song on You’re Trouble, and plants the seeds for what is to come as the rest of it unfolds. Hermanova is a multidisciplinary artist working primarily with time-based media and has already created some visuals for Roth´s 1k Followers ambient albums. The alluring video for Me Me Me is, in words of the artist herself, “an exploration of the movement of two bodies which meet in passing. A surreal possibility of the flesh inhabiting an undefined space, seeking to understand the choreography of a warp.”

You’re Trouble has been worked on for a long period of time, and it combines ideas originated at different timeframes and different sonic worlds, all the while succeeding at staying coherent. It navigates an abstract musical territory between cathartic abrasiveness and unrelenting post-club sounds. With Sin Maldita, Roth strives to make music that resonates emotionally, something that through the juxtapositions of chaos and form, prompts the listener to introspective reflection.

For our audience, not that familiar with your work, could you tell us a bit about your background and inspirations?

I release music as Sin Maldita and my side project 1k Flowers and also work as a sound designer/producer/mixing engineer. I’m influenced by all kinds of music, from vocal music like Hildegard von Bingen to UK Drill to Footwork, to Björk, to full-on pop like Ariana Grande, to Berlin underground club and experimental music.

Collaborative projects are very important for me, especially after periods of working alone; it can rekindle creativity and motivation. It’s a great feeling to support other artist’s vision and work in different environments and with different approaches – it never gets stale. Often you create something that neither would have just created on their own, and I take ideas and inspirations and reflections home that influence my own music. But it’s also important for me to also do my own thing – I’ve worked with people long before I’ve started taking my own music seriously, and at some point, I felt like it was really overdue.

What brought you to decide to start a new project under a new name? And what you want to explore with it?

I felt like this new project is an entirely different musical identity to 1k Flowers, which is why it made sense to me to use a different alias for it. With Sin Maldita, I want to explore experimental electronic and club music that resonates emotionally and has a certain human/pop sensibility, something uncanny, imperfect and sometimes I guess intentionally awkward that still hits hard, that people can connect to and feel understood and empowered by. For the next release, I want to double down on that.

“You’re trouble” effortlessly combines many genres, so it feels very free and without boundaries. Is this a conscious conceptual decision or just how it happened? How was the creative process of this album different than your previous ones? And what were the challenges for its development?

I think the album mostly feels loose and free because it combines so many different ideas that didn’t necessarily originate in the same timeframe – often the songs are hybrids and amalgamates that are made out of lots of smaller sketches and ideas. But I also wanted to make something that feels fluid in genre, as I enjoy music that can’t be so clearly defined and combines different sonic worlds, but I also put a lot of effort into trying to make it feel coherent.

The process for making this album was much more chaotic and dragged on for way longer than the ambient albums I made, which are largely improvised. The songs all went through a lot of iterations. In a way, at some point, there could have been a different “You’re Trouble”, with the same core song ideas, but executed entirely different. For the next one, I want to labour over details less and be more impulsive and spontaneous. Also, it’s the first time for my own music I’ve actively written lyrics and recorded my own vocals, which was uncomfortable at first as I wasn’t used to putting myself out there like this.

Tell us about “Me Me Me”, the first release from the new album. Why did you choose this song and how did the collaboration with Petra Hermanova come to be?

I found Me Me Me to be an interesting fit as a first single, because to me in a weird way it felt both like a great way to introduce the album sonically, but at the same time it’s an odd one out – I originally produced the instrumental for a pop artist. We even developed a whole song out of it complete with verses and refrains, but it was eventually deemed too “dark” for the artist and scrapped.

A year later, I picked it up again and developed my own thing out of it. Of course, over time Me Me Me has morphed into something entirely different, I added different parts and wrote my own vocals for it, but to me, it still feels like it is the most “pop” and accessible song on the album. I’ve worked with Petra Hermanova on visuals for my other project 1k Flowers before; we got to know each other through a mutual friend in the sphere of ACUD Macht Neu, a Berlin art/music house. I admire her unique process and a strong, singular aesthetic. I think Me Me Me was also the song that she resonated with the most and wanted to produce a visual for.

Going on long walks, playing video games, listening to and of course making music. I can get pretty lonesome pretty quickly, though so in times like this it can get rough.