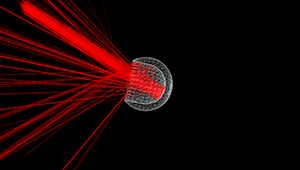 SHOHEI FUJIMOTO, From Code to Nature

Focused rays of lights reflect off in wavelike form- it’s repetitive nature puts the audience at ease and in awe, much like the ebb and flow of shore. Observing works like the Power of One series by media artist, Shohei Fujimoto, one comes to appreciate the novel nature of Fujimoto’s abstract imagery. They move in space and rhythm and often take forms in both abstract and minimal ways. Due to their novel visual nature, perhaps Fujimoto’s works are not meant to explain, rather experienced visually in a space.

From the Power of One series to his graphic designs, Fujimoto’s work relies heavily on mathematical formulas as a medium for abstract expression. In some ways Fujimoto is a modern-day M.C Escher, illustrating his works through mathematical operations that invoke a sense of novelty around his image making. It is clear that elements of nature are deeply rooted in his work, as light, time, and autonomy are recurring motifs that travel throughout several projects. For example, many of his graphic works play a set of patterns and interactions between patterns that visually indicate the passing of time, as well as the programs, own self-autonomy. Its rhythmic nature is expressed through its movement as shapes extrapolate, intersections form, and images dance around the screen.

Coded operations serve as a building block for Fujimoto’s process of exploration. Often, he refers to code and the mathematical operations as the invisible markers that create form. Sculpting imagery not in a particular shape, but sculpting the mathematical operations behind the image to give shape. Both intricate and alluring, Fujimoto’s works are prime examples for a new way of drawing and creating visual artworks.

Behind the imagery, emergence plays a powerful role in Fujimoto’s works. Emergence is the condition where an entity holds properties that t’s parts do not hold due to interactions between its parts. Nature holds many examples of emergence, such as a flock of birds forming seemingly complex patterns with no knowledge or intention from a single bird to produce such patterns. This theory of emergence is the process in which Fujimoto sets certain conditions to his code to create both minimal and intricate pieces of art that are the engine to his novelty. While Fujimoto claims that the mathematical operations he employs are simple in nature, the visual output is often complex and deep. Truly, these works can only be born from a system of emergenc.

Fujimoto is a tinkerer at heart, curious to see what images can be conjured from his mathematical operations. Using patterns and movement as his brush and easel, his works have an alluring quality about them. When observing his work I’m often reminded of a certain feeling of peace I can only feel when I am in nature- a certain appreciation for the way that an object is operating and existing beyond my own reality. If I could take a guess I’m sure Fujimoto would feel the same too.

Your background is in computer science, what drove you to commit to the arts?

First, my computer encounter was when I was young (about 6 years old). At that time, my mother was doing audio recording using a PC, and I was painting a picture on the display using the drawing software contained in that PC. I loved to do drawing/painting in various places regardless of paper, wall or display. I bet that it was then that I dive into art. Probably, I might have been interested in analog and digital go back and forth at that time.

You address a lot of your work as living entities or describe the quality of your work as if it is alive through its own nature. What is the thought process behind this?

I have been creating a artwork with the concept of “autonomy”. Entire of artwork, or each element of the artwork has its own time axis. In addition, it has its own limited functions. It circulates its function repeatedly like a life phenomenon, and maintains itself. By creating devices and aggregates that imitate life phenomena, I think that the technology contained in the device can highlight the existence between living objects/things and inanimate objects/things. Also, I think that its existence will make the viewer recognize the consciousness of the objects/things and the objects/things will welcome the viewer as an observer of consciousness.

I often incorporate random nature in the my artwork. By embedding random nature, I expect that unintended behaviors will lead to attractive expressions. Also, I feel strength and vitality in a figure that lives without being influenced by the outside world. Although there is no substance in the body of technology, I think that it’s possible to ask the viewer about the form of the new life by bringing out life force by behavior.

Both your graphic and installation work seems to suggest a great appreciation of mathematics. What kind of meaning do you derive from mathematical algorithms that you use to produce your visual output?

First of all, I’m not a mathematical professional. Mathematics used for artworks(visual/installation) are very simple things. I’m interested in what kind of data can be obtained from the results by reproducing simple numerical formula. As an example, I’ve created several graphics using “intersection”.

The formula to get the intersection point is very simple but the data obtained from it is attractive. Of course, there is no entity at the time of mathematical expression or programming. I think that I can clearly visualize what I didn’t notice or invisible by visualising data, building, modifying, programming, and decomposing the structure. In addition, by providing physical restrictions between these data to have physical relationships, something like texture emerges in the virtual space and brings it closer to more real existence.

Many of your projects include sound alongside the visual. What role does the presence of sound play in your projects?

By having something like a margin, I bet that the visual experience will provide a more visual focus and conversely providing a moment of focusing on the sound.

Previously, you were part of the art collective teamLab, since going onto pursue your own individual work, do you feel that your way of working has changed?

Of course, there is somewhat change in the contents of my current work, but it is no doubt that the technology and knowledge that I cultivated during the teamLab period is current my big foundation.

Now I can give myself a free time, so I would like to actively participate in artist in residences, domestic and foreign exhibitions and art festivals.

Uniformity, No play (Love this sentence “All work and no play makes Jack a dull boy”.)