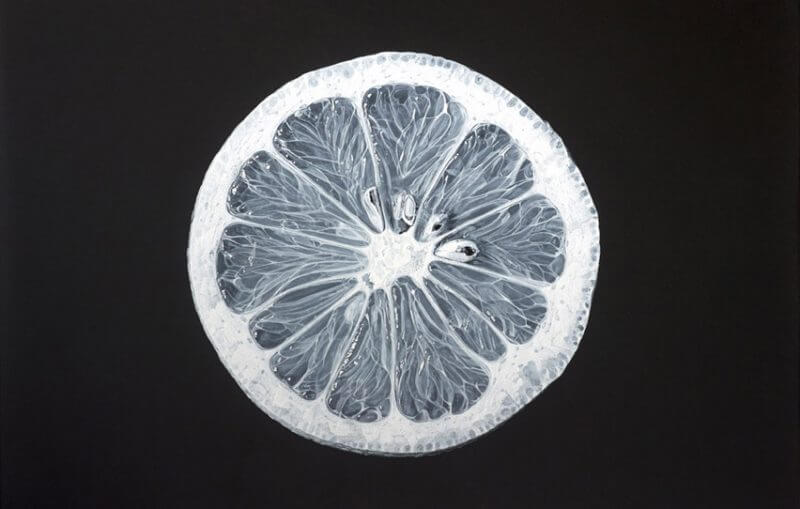 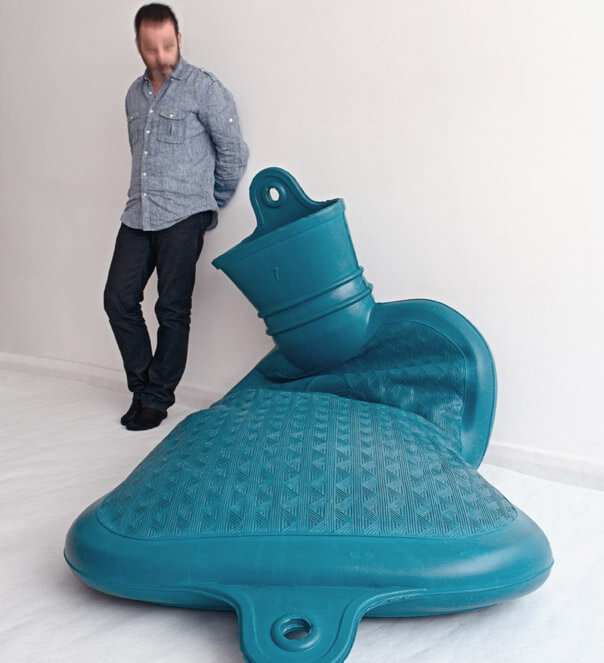 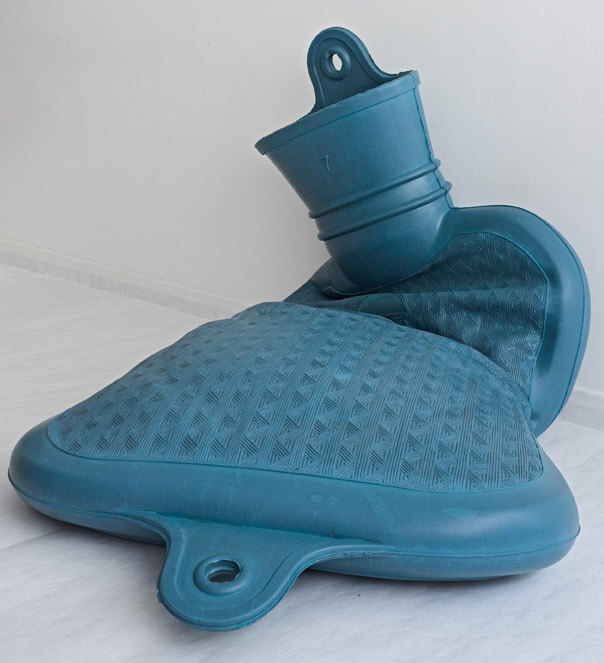 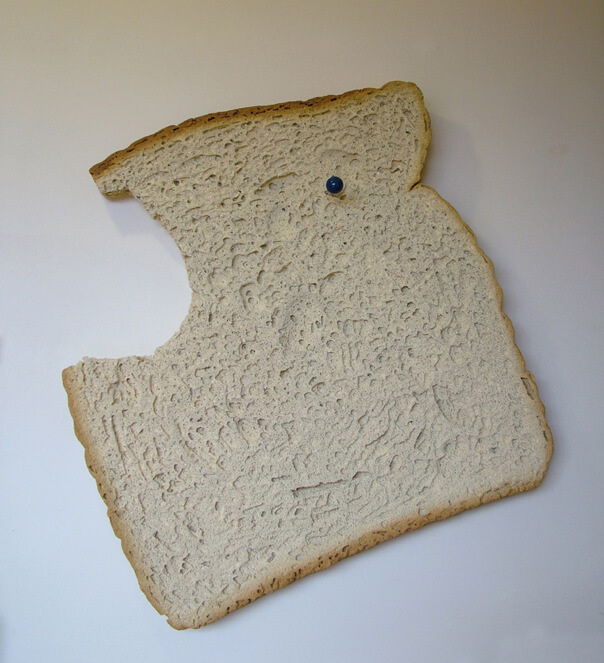 It was love at first sight. Oversized, hyper-realistic, delicate and sensitive are some of the words that describe the creative universe of visual artist Rómulo Celdrán, who finds beauty in household things and turns them into art. Quotidian objects inspire him “for different reasons, can be either aesthetic (or anti-aesthetic), plastic, functional or even emotional” in his own words. How reality is perceived is inherent to human nature. With his visual discourse of oversized everyday things and, working in both two and three-dimensions, Rómulo Celdrán puts in focus fragments of reality and provokes thought about the perception of the quotidian items we own. “I believe that all thought, including artistic thought, is based on what we take to be real” Celdrán said.

Two series caught my attention: Zoom and Macro. While Zoom is a set of acrylic and pencil monochromatic and hyper-realistic drawings of reality bites as light bulbs, orange slices and pencil, Macro is a series of atemporal sculptures made of polychromed polyurethane, aluminium, felt and epoxy which helps create a new sense of our physical world. 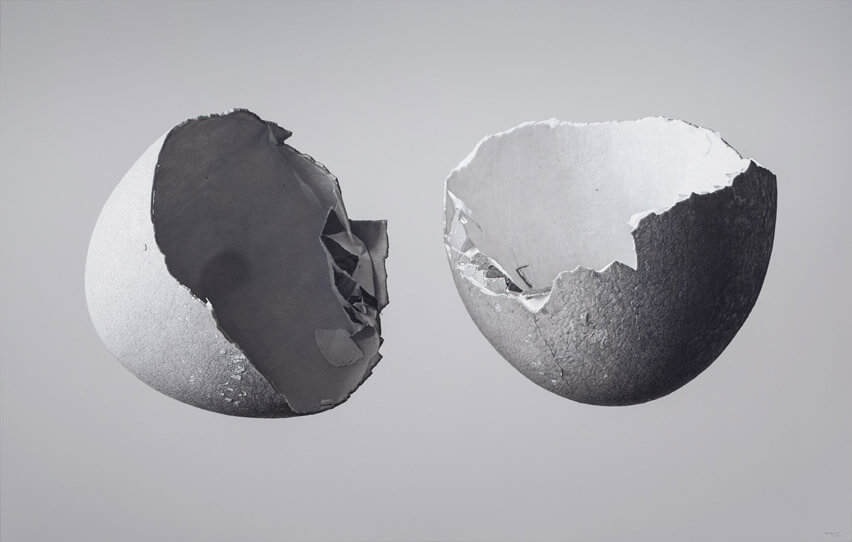 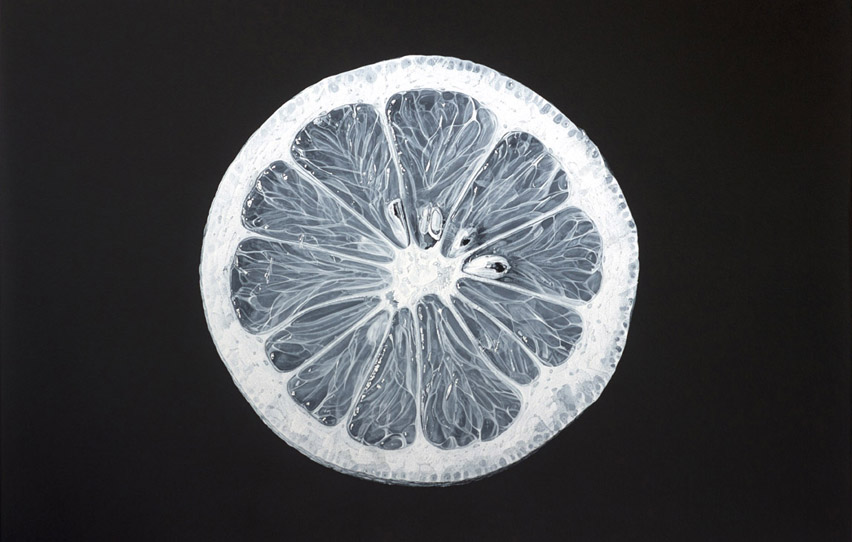 I think the world we live in has invested an enormous amount of energy in developing technology in general, and more specifically in communication technologies. The way I see it, this huge technological development has created a scheme of human relationships in which it is wonderfully easy to stay permanently in touch. This is probably what most fascinates me in a positive sense of the historical time in which we live; the easiness with which we are able to obtain information and keep in touch with other human beings.

On the other hand, precisely this easiness, quantity and speed in communications is diminishing the calm, depth and in some sense the quality of this communication. I am surprised by how difficult it is to reconcile quantity and quality in this respect. In fact, it worries me that speed might drive us to this sort of emoticon synthesis and from here to an excessive simplification in communications.

I have always thought that interpersonal communication is a phenomenon full of shades and complexities. The discovery of “the other” is a wonderful process that requires time and quality communication. It is from this idea that it worries me that communication excesses will drive us to a world in which we will constantly relate but in an absolutely superficial way. This would be the aspect I like least about the historical period we live in. In fact, it’s the heads and tails of the same aspect. As in other cases, you could say that behind a wonderful form lies a dangerous substance.

Some time ago I heard someone say that the opposite of happiness is not unhappiness, but fear. I think fear is the worst enemy of creativity. From my point of view, creativity is a great act of communication and I believe it is not possible to establish a positive and constructive communication in a scenario where fear is present. Let’s say that fear acts as a blocking agent that frustrates any honest attempt of expression while it hugely limits the possibilities of translating into specific results the creative potential that each individual has.

Of course, I am referring to fear in its multiple aspects …, fear of failure, fear of not being understood by others, fear of risk, fear of emptiness, fear of strain, of sacrifice, fear of fear.

It is frankly quite difficult to answer this question. It is hard for me to imagine my life having to do without any of them. I would say to answer your question and just by ruling out, that taste would be the only sense that I could afford to lose. All of the rest have very important relevance in the daily development of my work as well as in the things I like doing and without which I would not get by.

As a visual artist, I could not do without sight. Neither without touch, a fundamental part of my work as a sculptor. I should not rule out the sense of smell and the enormous amount of information that it gives when one is working with chemical products and materials in complex technical processes. It would also be difficult for me to live without hearing, without music that permanently accompanies me, without the conversation with others, listening to their voices.

Definitely, even at the risk of losing the enjoyment of food, I think that taste would be for me the only sense more or less dispensable.

I had my first experience with an art gallery when I was twenty. That was, without doubt, one of the most important experiences in my life and at the same time, one of the most negative. The director of the gallery turned out to be the most perverse and sickly noxious person I have met. So the experience was magnificent to learn exactly what I did not want to do with my life and to identify the kind of people I did not want to share my time with.

From his ambitious greed, this person urged me to work faster so that I could produce more works which he then tried to steal from me. Well, that would be the worst advice anyone has ever given me: “work faster”. I have to say that, coming from whom it did, I took it almost for granted that the most intelligent thing to do would be exactly the opposite. Since then, I work with the premise of ignoring urgencies and focus my priorities on the timing that my sense of quality and compromise with my work gives me.

Definitely introvert. However, I try to always be aware of this personal trait so to minimize its consequences to the extent possible. Let’s say that I try to be an introvert in permanent alert so that introversion does not win the battle.

I would say my recent rediscovery of the figure of the jazz pianist Bill Evans. I have known his music for quite some years but it has been his courage as a thinker that has totally fascinated me. I have had the chance to find in Youtube a series of videos from the ’60s. In these, besides his interpretations, he elaborates a series of answers and reflexions around music, interpretation and creativity that seem to be universally clear and blunt. Frankly exportable to any aspect of artistic creativity.

I especially recommend the documentary titled “The universal mind of Bill Evans”, presented by Steve Allen, in which his brother who is also a musician interviews Evans.