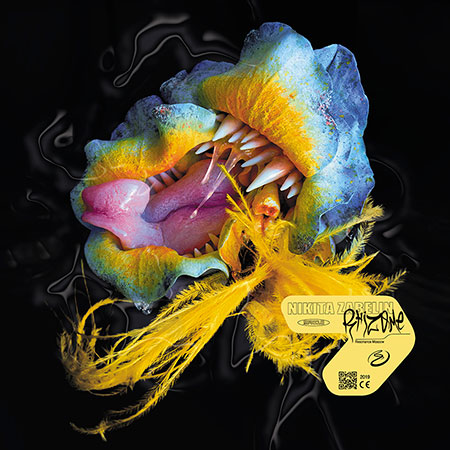 NIKITA ZABELIN, art and music through the shape of electricity

Nikita Zabelin, a Russian techno luminaire, is the founder of the label and artist collective Resonance Moscow that connects artists, audiences, promoters, labels and clubs. In his words: “Cooperation is the key to establish something powerful and new. Communication is the key to let the music be free.” Resonance is also a long-respected radio show, consisting of weekly programs, dedicated to new electronic music from Russia and the surrounding post-Soviet nations. Resulting from it, earlier this year the collective published a compilation which is the vital cultural evidence of an audible debt to Twentieth Century Soviet avant-garde traditions, the clamour of heavy industry and the obsessive rhythms of a factory floor. The compilation has also Sci-Fi/technological influence, as an evidence of Russian science and technology prominence. Nikita Zabelin says about it: “I think it is the echo of our past, yes!”.

Zabelin has also been developing the TESLA project, which is a new concept of performance using Tesla coils as a sound source. The project reinforces the idea of approaching forces of nature to create music. “I had a wish to shift the focus from the musical side more towards the conceptual one and directly approach some forces of nature, in this case — electricity, to gain new experience.” The TESLA project has been incepted as an art event, and not just an electronic music performance, that embodies audiences through Tesla coils and also including Tibetan signing. For Zabelin, TESLA is also a medium to investigate what the artist has named as “post-internet era”, which represents the contemporary society where virtual and real worlds are so close to each other like never before. “We are in front of a completely new era. I call it post-internet because we take something from the virtual world and make it real.”

More recently, just a few days ago, Zabelin released his first solo album, Rhizome (Resonance Moscow, 2019), which attempts to musically grasp and visualize the unseizable: the invisible and absolute absence of the self. ‘Emptiness’ with complex generative patterns and brute abstract melodies paint brittle contours around harrowing empty spaces.

Nikita Zabelin is an example of the contemporary art and music in Moscow, and he evidences the differences between eastern and western culture, although reaffirming that “since the last 100 years our country collapsed three times. We live now. Tomorrow never comes and if you need something, do it yourself”.


For our audience that is not that familiar with your work, what is your background, influences and main interests?

I grew up in Yekaterinburg, in the Russian Urals, in the 90s. When I was 4 my country collapsed. Poverty, gangs, heroin, chaos this is what I was surrounded with. Fortunately, my parents were young and quite flexible to adjust themselves to this “new order”. They were 18 when I was born. So all this social communication skill and interest to music I got from them. I had a good mix of Barry White, Louis Armstrong (papa side) and Trance, Speed Garage, Techno (mama side). My grandma was a tailor and we shared one room. Every morning I woke up with the sound of a sewing machine. We still have a collection of model cars 1:43 of my grandpa counted a couple of thousands of cars and he was deep into the engineering of different kind of electrical devices. Besides that, he could speak several foreign languages. While total madness occupied the streets in my home, I was surrounded by sounds, colours, textures, small details and very nice stuff. I think this mix still boil in my head. This aggressive dark and fragile bright sides of me you can discover in my work.

How was the Resonance Collective incepted and what are its main aims?

Actually, at quite an early age I realised there is no way to develop something all alone. Cooperation is the key to establish something powerful and new. We can see it every day. Sine ever my dream was to create a system to support creative people cuz I think they are the most insecure part of our society. They need a special environment to grow their ideas and to make them real. After 15 years of research, I developed this platform that let local musicians being noticed; sure money would help to do it faster and bigger but the most important thing here is quality and this you cannot buy. Only knowledge and experience will help. So what we have now, in the end, is the strong system that connects us as Resonance Moscow with artists, audience, promoters, labels and clubs… communication is the key to let the music be free. This is exactly what industry is against of cuz this will destroy it.

You’ve recently published a compilation  “dedicated to new electronic music from Russia and the surrounding post-Soviet nations.” what have been the biggest challenges for electronic music producers in the post-soviet era?

The biggest challenge is still here. To find out what is exactly electronic music in the post-soviet era and what is the difference between all of us who grew up here. Politics, police, church all this will be gone one day. But music will live forever cuz it’s not something you listening on iTunes or buy in a record store. Music is a common language for all of the universe. I’m sure I’m right even having no knowledge about physics or space. Music is the universe and we are the resonance)))

In quite a lot of the compilation tracks, you can clearly see a SciFi/technological influence. Is this an influence from the Soviet  (when science and technology were quite prominent) or more a reflection on the advances or current societies?

I think is the echo of our past, yes. The space program of the Soviet Union it was something we should be proud of. Nothing deals nowadays. I don’t think Elon Mask inspires musicians with Space X)) More of that in Russia people like to do something with their own hands. every year my grandpa made a Christmas tree with new technology for the lights. Everything was made from scratch and was very interesting for me to see how he is doing it. sure we have these big laboratories and universities. But even without it, we have many talents and big heads who do amazing things. For example, Dmitriy Morozov known as :VTOL:. I don’t have enough words to explain what he is doing , incredible!)))

Could you tell us about your TESLA project?

The concept of the “TESLA” performance project was born last year, in 2018 — I came up with an idea to use Tesla coils as a sound source. The idea was formed and later on, the implementation took quite a long time, almost half a year. And finally on April, 24th, 2019 we reached the threshold of the action itself in Aglomerat club in Moscow.

I had a wish to shift the focus from the musical side more towards the conceptual one and directly approach some forces of nature, in this case — electricity, in order to gain new experience.

Among other things, it still had to be atmospheric – so I decided to involve my good old friends, Kira and Vitya of Skotoboinya Promo, in organizing the event, because they are professionals in creating an atmosphere, we all know this from their multiple past events. Kira and Vitya were engaged in setting up and running the light, because they wanted to create not just some atmosphere, but a unique atmosphere, unforgettable for you. They supported that evening and created a natural feeling. We all wanted to bring people closer to some kind of post-apocalyptic feeling, even a virtual feeling.

With TESLA we started studying the moment of post-Internet space in its new stage of development. For us, this is the main topic, in which we did not immerse you deeply, but rather we concentrated on an interesting music program that was specially prepared, where the source of audio was Tesla coils, the sound produced by open electricity, the whole atmosphere was be filled with interesting lighting solutions that emphasized the basic emotion that we were trying to convey.

And, of course, I would like to mention the warm-up performance of Phurpa, a group of Tibetan throat singing professionals. The idea of their participation in this project came about because it is necessary to prepare listeners for a serious tactile, emotional and even physical feeling of interaction with the coils because it is a strong, impressive thing that will not leave anyone indifferent. People even felt with their nose how the oxygen was burning, the ozone layer. We considered the project to be unique and first of its kind in the context of electronic music.

I’d like to underline that in this show, I am not the centre of attention in any case; I shift the focus to some kind of collective experience in which I participate along with all the spectators))).

What it is that most attracts you to work with electricity and Tesla coils in particularly?

The virtual and the real world are so close to each other like never before. We are in front of a completely new era. You remember the difference between classic art and contemporary art. Classic art used images of the world around, contemporary is about to imagine a new world and now we can create and live in this new world with no boundaries. I call it post-internet cuz we take some virtual world and make it real. To be honest, I don’t see big differences between eastern and western culture in this case. In Russia, we have a better internet connection but fewer people understand what we are talking about. On the other hand, we have wifi in subway since ages ago, we also have USB plugs at the bus stops, electric buses instead of gas-fuel buses, you don’t need to go anywhere to pay for you central heating or taxes – we have apps for it, etc.

Ordinary people use this without thinking about art or post-internet era, they just use it. I think this is more important for progress than art. It’s not something we think about, it’s something we use. Another difference between Europe and Russia is adaptation. Once I and Hendrick van Boetzelaer were walking through Moscow and he was surprised about one abandoned spot that was transformed into an amazing park zone in just two months. He said in Switzerland it would take them years just to get an approval to do this. Many architects go to Russia to make their projects come true cuz they simply cannot do it in their own countries – too many restrictions, too much bureaucracy. Sure this is historical context. In the last 100 years, our country collapsed three times. We live the present. Tomorrow never comes and if you need something do it yourself. I think these are main aspects of Russians that differ us from Europe and some of the rest of the world. On one hand, it’s good, on the another can be bad, but it’s how it is))).

I’m really interested in building concepts, to see things differently. I like fashion and science. doing and wearing clothes you can express so much. The world of science is an endless source of inspiration. I enjoy working with soundtracks. details and textures that make an atmosphere are more important for me than a plot of the story itself. In my album upcoming album Rhizome I follow this principle. I think the perfect place for me is collaboration. I need another talent to evolve my one and discover something I’ve never seen before.