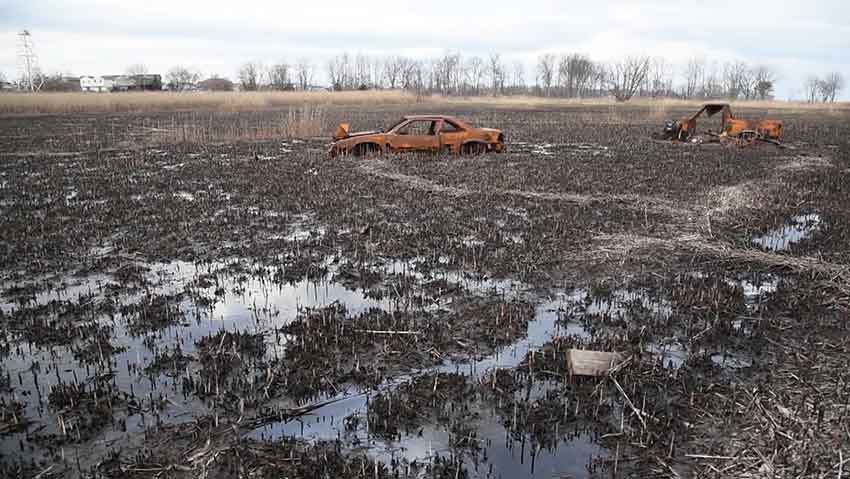 Nathan Kensinger is an interdisciplinary artist working most often in photography and installation. Born in San Francisco and currently based in Brooklyn, for the past decade and a half, his work has focused primarily on documenting and exploring climate change in its myriad forms. This manifests across a variety of subjects including; hidden urban landscapes, off-limits industrial structures, unnatural waterways, environmental disaster zones and coastal communities endangered by sea level rise.

At the first STATE studios showcase, Hydrosphären, Kensinger is showing his 2018 documentary Managed Retreat. The documentary focuses on New York state’s initiative to respond to rising sea levels following hurricane Sandy, wherein the state purchased and demolished heavily damaged neighbourhoods as a managed return to nature and move away from the rising water. The documentary is an observation taken over five seasons of the demolition of these areas and nature’s reclaiming of them. This film exists both as a challenge to ideas of ‘home’ in a rapidly changing environment as well as an example of a practice which Kensinger considers likely to be adopted by more state and national Governments as a means of responding to climate change. Managed Retreat evokes myriad emotions in the viewer, empathising with the people who were forced to sell their homes and move on due to the ever-present environmental dangers compensate with living on the coast as well as understanding the value of allowing urban areas to be reclaimed by nature, providing habitats for wild animals as well as allowing natural green space to develop around the city. The project was initiated by STATE Studio and realized in cooperation with Fraunhofer Headquarter Communication and Imagine Science Films and is supported by the Fraunhofer-Network Wissenschaft, Kunst und Design.

Kensinger also often works in installation, engaging in alternative spaces and methodologies around showing work in order to provide stronger, more immediately perceptible contexts. In 2017, he produces an installation entitled Permanence: Part One. The work consists of photographs taken of industrial structures, that were disused and ultimately demolished in the decade preceding it, installed in an abandoned grain warehouse built in the 1800s. The photos were installed on the columns of the warehouse, left exposed to the elements and are currently crumbling as the structure around them is left to rot. The Permanence series is ongoing, documenting the American industrial era through site-specific installations set within its last standing remnant.

The series explores the intersection of permanent and temporary, being both a technically permanent installation set within a permanent structure but one that has passed its term of usefulness and is now being allowed to deteriorate to rubble. The installations point to previous sites of relevance both to the communities they’re set in and to the broader context of American culture, as well as to the ways that shifting economics and industry have allowed these monuments to twentieth-century social culture to be lost to history.

Kensinger is an artist documenting not only our changing environment but our changing societal priorities, our responses to the climate crisis and the effectiveness of these responses in real time.

For those that are not familiar with your work yet, could you tell us more about your influences?

For the past 15 years, I have been creating a series of films, photo essays, and public art projects documenting the changing landscape of New York City. These works look at how humans have impacted the urban environment, and include portraits of abandoned industrial buildings and video installations about polluted waterways. Since 2012, when Hurricane Sandy flooded New York’s coastline, these projects have also focused on how sea level rise and climate change are reshaping the city.

All of these projects are influenced by my background as a documentary filmmaker and journalist. I studied documentary film at Hampshire College 20 years ago, and have been doing journalism even longer, for the past 25 years. So all of my work is a form of creative non-fiction. Going even further back, I would say that my earliest influences come from my childhood in San Francisco. I grew up exploring that city’s hidden landscapes, playing in empty lots, forgotten creeks and abandoned World War II bunkers, and that definitely shaped how I navigate other cities.

You are presenting at STATE studio’s Hydrosphären exhibition Managed Retreat, a short film documentary that explores the relationship between man-made action and natural reactions. Could you tell us a bit more about the piece?

Managed Retreat is an evocative portrait of how sea level rise is transforming New York City’s coastal communities. The piece looks at three waterfront neighbourhoods in the city, where the homeowners decided to sell their houses to the government and move away, because of hurricanes and flooding. The people who lived here felt like they could no longer be safe near the water, and their homes are now being demolished and returned to nature, to become a wetland.

The film is a meditation on what ‘home’ and ‘nature’ mean in this new era of climate change, both for humans and for other species. As we destroy our own houses, we create a space for other plants and animals to move back in. The streets are now filled with deer, possums, baby geese, wild turkeys, and fields of wildflowers. I think that many other cities around the world will go through a similar process in the next 20 years, as sea levels continue to rise.

What was the intellectual process behind it?

The piece was inspired by my photographs of Hurricane Sandy. In the aftermath of the storm, I began looking at all of the recovery efforts around New York, including the process of managed retreat. Of everything I saw, this process was the most interesting response to the storm. But very few people had heard of it or knew that their neighbours were tearing down their homes, because of climate change. As I watched these communities gradually transforming into wetlands, I was inspired to start filming.

What were the biggest challenges you faced during its development/filming?

One of the biggest challenges was creating a piece that embraces a non-human perspective. These neighbourhoods are located in the most populous city in the United States, New York City. But the humans have faded away into the background, and so the main characters in the film are the ocean, the marshlands, the insects, the wild animals. What is it like for city dwellers to find out they are a minor character in the life of another species?

I’d like to continue to explore artworks that embrace the perspectives of other animals and ecosystems, and that don’t rely on humans as their primary narrators or protagonists. All around us, millions of species are now going extinct because of our actions, but most of our art is focused on the human experience.
We all need to be focusing in on other species, especially if we want to survive this mass extinction, which we are currently living through. Without other life on earth, none of us will be here much longer.

For me, time is the chief enemy of creativity. There is not enough time in one human life to complete all of the projects I would like to take on. But I find reassurance in the idea that everything will continue on when I am gone, in some form. We are all just a tiny part of the cosmic landscape.

Other species of life. We are in the midst of one of the biggest mass extinctions in the history of this plane. The frogs are dying, the insects are dying, the fish are dying, the coral reefs are dying. Humans won’t survive much longer if things continue as they are.