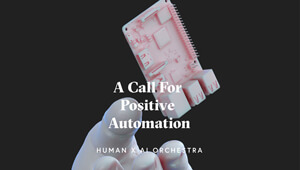 MAËL HÉNAFF, on how technology will make us the humans we always wanted to be

Technology is viewed in different manners. Some see it as positive. Most see it as negative. Some are neutral. However, there are some who take it very seriously, who understand that it is here to stay and who consider the implications of it. “Techno-optimist” Maël Hénaff is proposing something quite unique: A Call for Positive Automation, which aims to be a starting point for bridging the gap between the old industrial era, where man still did most of the labour, and the automation era, in which machines will basically replace human labour. He did showcase the work at OTHERWISE festival, a 3-day multisensorial and experimental festival-as-research that took place in Zurich.

His practice brings together not only technology with the artistic component, but with sociological factors. Maël Hénaff’s beliefs are surely positive. But his positivism is definitely fed by research and implication. It is not dreamy. It is not naive. It is not falsely optimist. It is a positive approach that was birthed out of observations and discussions. And through his research, he became much more than an artist or a coder.

Maël Hénaff aims to discover means of using automatism as a positive current in human history – if used in an intelligent way, the technology could, actually, led to a bettering of the human condition. If machines worked for us, we could finallyarrive at a level of universal income, and people would not be conditioned by their financial status to choose a path in life. Machines could give us the freedom we’ve been looking for.

Maël Hénaff’s entire oeuvre is that of one who understands the humanoid fears, flaws, dreams and needs. He is a master of technology who never forgets that, by default, we are actually not machines. His project When the Saints go Machine – How to become a machine deals with people’s fear of death. In collaboration with David Wood, Hénaff proposes a machine that manages to defeat cessation by “migrating from the meat machine to the stolen machine, via cryonic and mind uploading technology”. However, this project too calls for a certain degree of positivism, as it requires one to have “faith in a superior entity, a divine algorithm”. Projects such as The Symbiotic System – Feeding as a survival act against the greed of eating, highlights current societal flaws and how they could be overcome. Again, Maël Hénaff manages to be understanding and empathetic to the tragedy of human greed and recklessness. Instead of trying to re-compute our neuronal networks, he accepts them as they are and proposes technology as a saviour entity. Installations. Machines. Everything, with the sole purpose of bettering ourselves.

For those that are not familiar with your practice; Could tell us a bit about your background and how and when did you get interested in the crossover of art and technology?

I am a designer-researcher based in London and currently studying MA Material Futures at Central Saint Martins. My practice examines the intersection of technology, social sustainability and critical design. Through my work, my aim is to establish and communicate different perspectives on the way we perceive technologies by developing controversial case studies and critical scenarios. I have started to look at the intersection of art and technology after a short workshop which happened four years ago in Bordeaux, on how to use the software Processing and create interactive concerts. This experience was the beginning of my journey into design, art and technology.

At OTHERWISE festival you are presenting A Call For Positive Automation, a performance showcasing the potential of reprocessin technologies (in your words); Could you tell us the intellectual process behind?

A Call for Positive Automation is a case study which should be seen as a call to react on both the positive and the negative impact of automation. This is valued by the insurgence of automated systems and how machine learning can have an impact on our communities. After a discussion with Nick Srnicek, the writer of “Reinventing the Future”, I became obsessed with the idea of living in a society where universal basic income is implanted in our system; where a job is not associated anymore to define what makes us human.

This would also mean that human labour is replaced by automated systems, that would do the work for the humans, and provide them with the minimum funds needed to live. The problem here is that this scheme would make no sense in our current system. A Call for Positive Automation aims to organise a social and collective plan, a “thinker tank”, which beliefs in showcasing the real potential of automated technologies and machine learning.

How do you come up with the idea?

I came up with the idea of looking at the positive side of automation because of the surprise I had after looking at all these articles about how automation is going to impact negatively the human labour and the rules of the job industry. In fact, 4 months ago, I was on holiday in France and I saw this cashier who was sitting next to a huge black box which looked like a vending machine. This machine was actually performing all the tasks that this cashier is supposed to have. I learned a few weeks after that actually this person still has her job because the government is taxing the private industries if they replaced too many humans by machine.

We are in a transition period, and we will arrive at a point that more people are going to live on welfare than people surviving because they have a job. Nonetheless, I am a techno-optimist, and I still think that automated technologies are nothing but new tools of creativity and source of positive social change. The problem is not the technology in itself, it is the system where it is implanted. By collaborating with a community which have already lost their jobs or cannot be hired because of the insurgence of automated systems, is a way for me to showcase a new realm of possibilities for a positive human / automated collaborative future.

What reaction do you expect from the people who interact with the performance?

I really hope that the performance is going to outline the positive impact automated systems can have on our communities. As this project is still an ongoing project, I am keen to receive feedback from the public.

How people respond to multiple stimuli in a digital environment beyond the touch of a screen or button is one of “questions” in this hyper-connected 21st century. How are these new technologies affecting or changing today’s human behaviour?

As Spinoza said “Technology is neither good nor bad, nor is neutral”, which means to me that technology is only a tool which can fulfil opposite intentions and desires. For instance, social media is both a source of inspiration and a facilitator for short communication but also in the extreme case a mirror of an insecure society in need for celebrities and social reconnaissance.

On the other hand, I am intrigued to see how technology became a new medium to develop new communities, beliefs and rules. Previously, I have collaborated with a techno-optimistic community from London where I was particularly inspired by the way they considered upcoming technologies as the solution for major issues, such as sustainability, health, economy, etc. You can, of course, argue with their beliefs and the reliability of their solutions.

However, what is important for me is to observe that technologies have defined new optimistic communities composed of various people, reunited because of the hope and interest they have on technologies.

As I was doubtful on how to respond, I asked the machine learning that I had previously crafted, with its response saying “traditional computers” which I think says a lot about what I fed this algorithm with!

All my friends from Material Futures. Without forgetting the 2018 promotion, especially Noémie and Davide.

(Photos from the series A Call For Positive Automation. Courtesy of the artist)