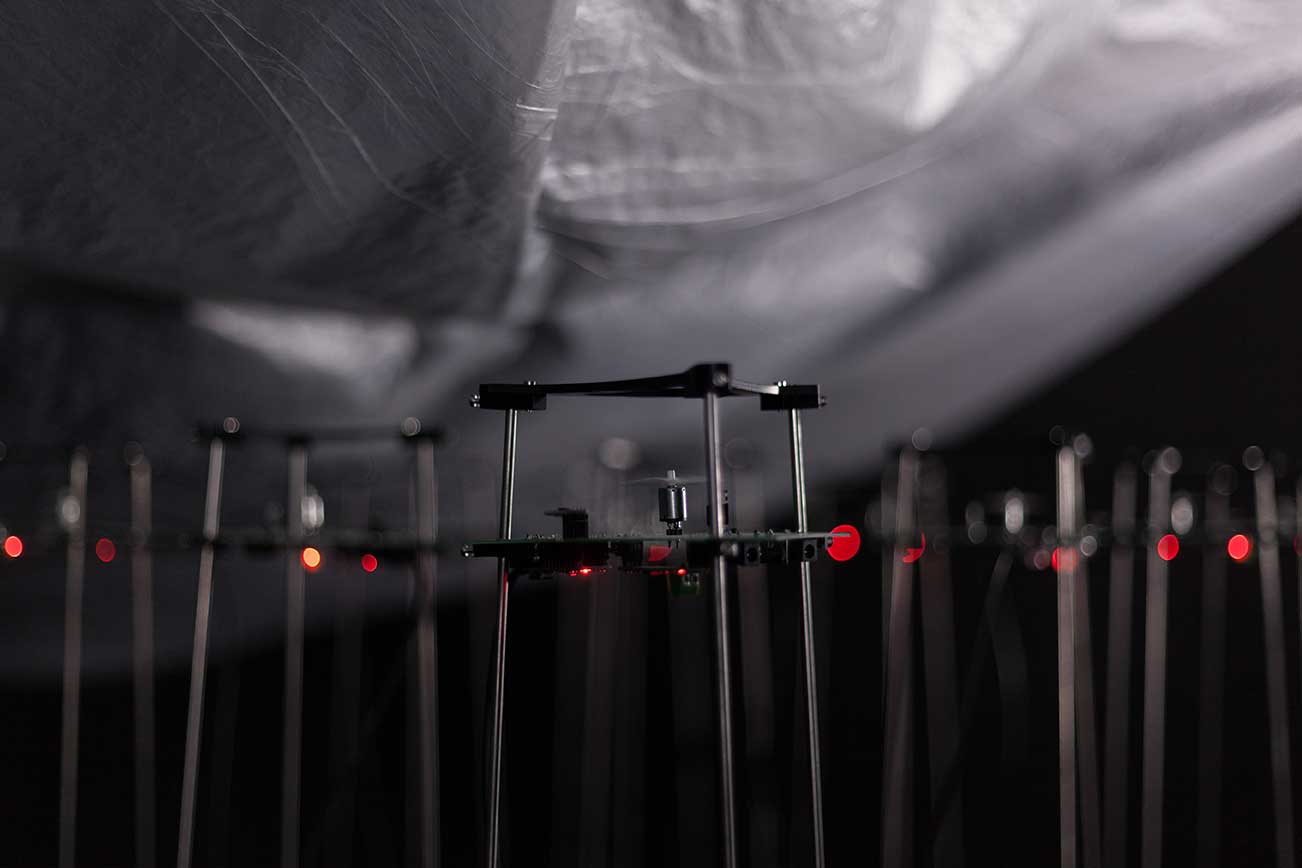 LOTTA STÖVER, reviving plastic into a medium of the modern era

Lotta Stöver works as a student and media artist in the Digital Media program of University of the Arts in Bremen. Her works are growing in the fields of new media, art, technologies, research and simulations. Driven by a strong interest in the intersections and interdependencies of all phenomena and matters aligning, disobeying, transforming and mutating along with (new) techno-*-logies, her works evolve in various media as installations, electronics and publications.

Motived by the multiplicity of modern media technologies, her work explores technologies from different perspectives. Her latest works are presented in installations and tend to present strong research around movement. Whether through the use of simple physics or extensive use of robotic components bringing these pieces to life in a very particular way. As in her work, 1000 Behaviors (2019-2020), an experimental framework for observing and evolving the movement behaviours of a robot. Consisting of nine collaborating servo motor segments, that are connected by joints, the robot performs its movements based on generated and processed data to find its most optimised behaviour.

Her most recent work, Indisposable (2019-2020) investigates the spatiality of plastics and the politics they hold in spaces as partaking materials. Emerging from a plastic sheet, that is stimulated by multiple wind-producing machines from below, together they enact the plastic sheet’s wave-like movements. The installation is conceptualised and built around concerns of plastics’ influential role in the realms of contemporary geology and ecology and aims at amplifying their powerful spatial-political agency. Along with the production of undulations, Indisposable focuses on the spatiality of plastics at the example of bodies of water.

Plastics have transformed our lives in many different ways. Revolutionised medicine, in the form of clingy, light-as-air wraps, they extend the life of fresh food. In airbags, incubators, helmets, or simply by delivering clean drinking water plastics save lives daily. This installation sheds some light to the urgency of calling us humans to relate to plastics and recognise them as more than just abstracted substances for fabrication. As embedded partaking materials, holding their powerful spatial agency and qualities, plastics have never been disposable. In a time where the conversation around the use of plastic is stronger than ever, what could be more relevant to discuss today?

For our audience that is not familiar with your work; could you tell us a bit about your background, interests and inspirations?

Sure, thank you so much for your interest! I am an emerging media artist and researcher, recently graduated at the University of the Arts in Bremen, Germany, where I studied (and continue studying) Digital Media. My works are mostly driven by an interest in how phenomena and matter relate to modern media technologies, whether they transform, or disobey, change, align, subvert, maybe even mutate along with them. Usually, my works take form in media such as installations, electronics and publications. I take a lot of inspiration from theorists like Rosi Braidotti or Donna Haraway, but I learn just as well from fellow students and teachers.

What is the intellectual process behind Indisposable? How did you come up with the idea?

The installation Indisposable is the work that I graduated with. The process to develop it was very challenging and is actually still ongoing. It revolved a lot around the idea of wave-like oscillating movements and the observation of how bodies of water and plastics spatially converge. As it turned out, Indisposable became a layered investigation into plastics and their material origin as crude oil and gas reservoirs in the grounds of the seas, how plastic materials hold their own political spatiality and how “The Smooth and the Striated”, a text by Deleuze and Guattari, can be a suitable guideline to re-narrate the story of plastics and their material and spatial transformations and processes.

What fascinates you about plastics and how do you use it to communicate?

There are lots of approaches to investigate the materialities of our contemporary technological culture. Still, most of these focus on minerals and metals, such as lithium or crystals, for example, while plastics do not get too much attention. Still, plastics are important materials in the electronic components, where they function as insulator and packaging, defining and protecting the component from external influences, but at the same time other outside components from short circuits. This way plastics already are spatial, by defining an inside and an outside. But also beyond electronics and packaging plastics have become spatially ubiquitous and therefore, influential materials. Today plastics are so widely spread that they are found in almost any location of Earth.

I find the production processes of plastics particularly interesting, and they have become a metaphor for me to give an outline of the processes of homogenisation and heterogenization general. The process to turn crude oil or gas into plastics, as an example of artificial structuring of a space, is driven by intense segmentation and relies on the resulting control from this segmentation. This parallelism with other kinds of spaces is also one of the reasons why the text “The Smooth and the Striated” by Deleuze/Guattari offers such an appropriate narrative to describe the transformation processes that plastics go through, as this text can be seen as a precise description of becoming homogenous when being turned into a product, and then re-becoming heterogenous again, when plastics leave the city and its markets, to accumulate as a patchwork of debris in the seas, the grounds and beaches.

We need to learn from history to not repeat the same mistakes; what are the outcomes of this project?

For me, an obvious point that I try to make is that no physical material is actually disposable. Even if they are called and treated as such. If for example, the plastic package of a consumer good has fulfilled its assigned purpose of securing a product from external influences, even after it has been disposed of, or thrown “away”, it is still there. So an important aspect of this work is to widen the horizon of material perception, away from plastics as purpose-bound consumer products, to a perception of plastics that recognizes them as active, versatile, even uncanny materials.

Beyond this, plastics and their negative effects upon many living beings of the sea, as well as the lands, hold a very humbling awareness into what humans are not capable of, which is total control over the material and its spread. Already 1957 Roland Barthes mentioned how the discovery and development of plastics was surrounded by euphoria, which soon turned into a view of plastics as a boundless material: “So, more than a substance, plastic is the very idea of its infinite transformation”, which Heather Davis almost 60 years later reflects as: “Plastic became synonymous with ephemerality, seeming to offer a substance without ontology precisely because of this manufactured disposability.”

The fact that plastics actually hold a dangerously assertive ontology is now well researched and exceedingly covered by the media. But the necessary conclusions, that the West tends to underestimate other-than-human agencies, and overestimates its own agencies and capabilities to control, are still ongoing.

In your opinion, how can art and design help us to cope with challenging situations like the climate crisis or the one we are enduring now with COVID-19?

Telling only from the few years I have been studying and practising media art, and this is a difficult question. Actually, I still struggle with this dilemma quite much, because at first glance an art practice that more or less relies on modern technologies, seems to be rather complicit in the climate crisis, than an opponent of it. And to a certain degree it certainly is, since it requires material resources, often from other countries, and also consumes not insignificant amounts of energy to produce, as well as exhibit.

At the same time, maybe even through this involuntary involvement, it is becoming almost impossible to work on something and completely forget about environmental concerns, which might sound like a burden, but is actually a very helpful constraint to what might be an urgent thing to work on. But beyond this more pragmatic question, art and design, of course, have a lot to offer, when it comes to imagining alternatives, whether they are alternatives to the damaged relationships from humans to Earth and their other inhabitants, or if these alternatives consider new ways of coping with the trauma that we are living in a time of mass extinction. My favourite example of such an artistic way of coping is at the moment eco grime.

I am very glad that at this point in my life, I don’t have to be afraid of my most basic needs, like food, a place to sleep, and so on. So I am in a privileged position where I can understand my worrying more as something that connects me with the things and shows me what is dear and important to me.