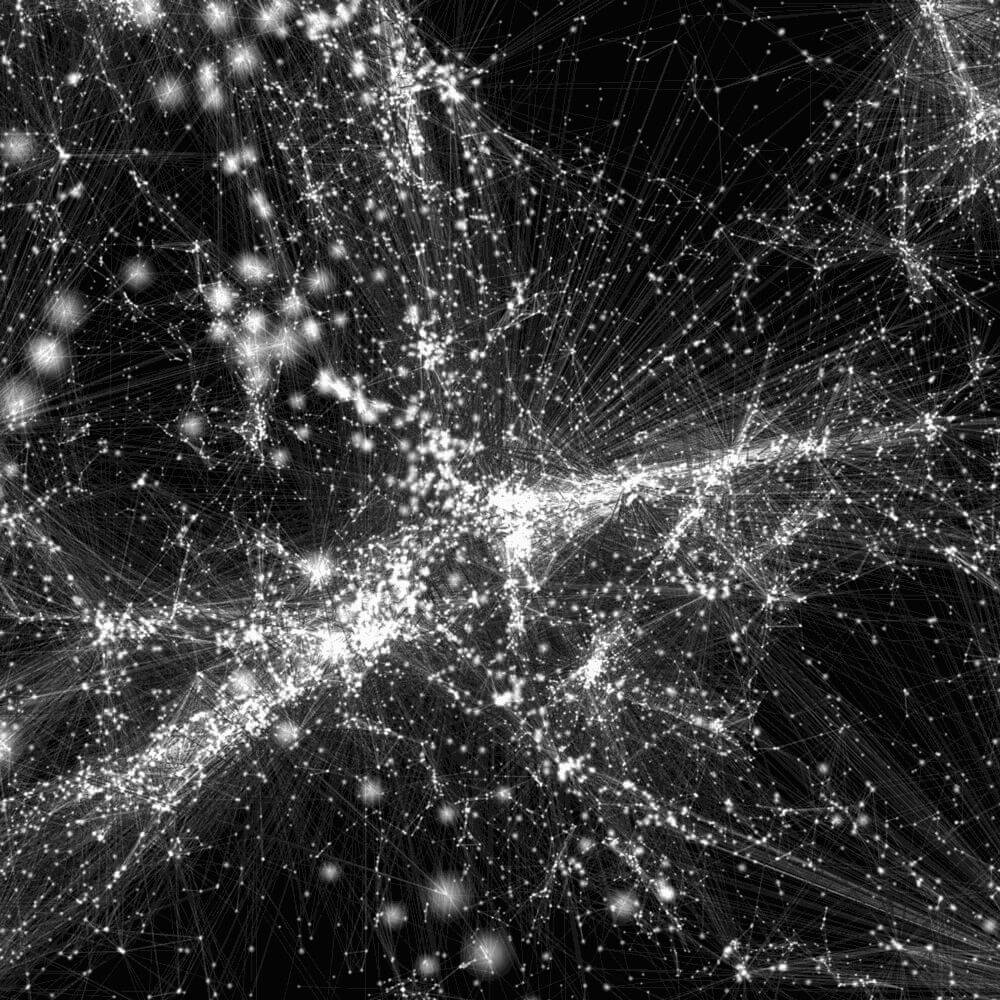 The Distinction Machine in its most basic form is an experimentation on the language of machines. Not necessarily the language of code, which we use to communicate and work with computers, but a foreign one that humans may intrinsically not understand. Artist and designer Kim Albrecht is able to shore up this language through his experimental approach to data visualisation. In the Distinction Machine, one views glitchy psychedelia of imagery. Colour and pattern wave back and forth as it represents an error within the computer’s deterministic logic. When tasked with an action of rendering two colours in the same position, deterministic logic decides to create intricate patterns that move in strange and unexpected ways. As if the colours are oscillating between each other in an incomprehensible way, Albrecht is keen on allowing the audience to feel its strangeness and foreignness.

The project makes strikingly clear the difference between human and machine, from the gradient to binary, opening up questions about whether the reliance on computation, which works on in some binary way, can really allow us to utilise the full nature of human expression. For Albrecht, these works are not just motifs or symbols for this gap between machine and human but rather artefacts and evidence as to why the medium of computing needs to be questioned and examined through a more rigorous lens.

Even in his other series, Artificial Senses, Albrecht employs raw data of sensors from a computer to show the image of a computer recording data of the computer’s hearing, orienting, moving, touching, seeing, and locating. None of these images is in any comprehensible format, rather they represent the unfiltered and unpackaged data that the computer itself digests. Through this exercise of extracting and view these raw artefacts it is suggested that for all the talk of ‘Big Data’ and ‘Artificial Intelligence’, people can only scratch the surface and understand them through abstract principles rather than through the incomprehensible and strange imagery that the computer uses for itself. And if so, why should trust and reliance on these terms be taken for granted?

When viewing the relationship between humans and computers through these non-human works of art, it is much easier to call into question whether technology (the binary one) is truly something that can augment the full expression of humanity or not. Perhaps like the colours in the vectors, it is the human species that is stuck in this glitchy psychedelia- creating what seems like chaos and at times indecision.

While computers and algorithms may be here to stay, investigators like Kim Albrecht do well to equip the audience with a healthy dose of speculation over the incoming technologies of our future.

For those that are not familiar with your work, could you tell us a bit about your background and inspirations and when and how did the fascination with the crossover of art and technology come about?

During my bachelors in Graphic Design in South Africa, I realized that I loved the conceptual and visual elements of design, but at the same time, I despised its entanglements with business and capitalism. I didn’t want to design logos or create packaging to sell something. At the same time, I had a deep fascination with science. Not for any particular discipline, but rather for the entire enterprise. Reading James Gleick’s ‘The Information’ and ‘Linked’ by Laszlo Barabasi (who later became my boss) sparked my fascination with data, information, and knowledge as well as the fabrication of these terms. From there it was a small step into designing visualizations.

For a couple of years, I worked closely with researchers from all kinds of disciplines, visualizing data and with that creating alternative viewpoints into research practices. Currently, I’m researching at an institution called metaLAB (at) Harvard, which is at its core reflecting technology through artistic methods.

At the same time, I’m doing my PhD in media theory at the University of Potsdam. With that change, my interest shifted. Nowadays I’m more interested in questioning technology and its constitutional factors than using technology to understand the world. What are the underlying assumptions behind data? How is the medium of the computer influencing how we think about the world? These are the questions driving my current research.

Distinction Machine is a set of experiments in which you ask the computer to perform the unsolvable problem (known as z-fighting in computer graphics): “Draw two shapes in different colours at the same position.” Could you expand more on the intellectual process?

If computers become more intelligent how would their understanding of the world differ from ours? To provoke this question I sought a task which would visually showcase how some factors of computation which usually stays hidden underneath the surface of our screen-based interfaces. Asking the computer to draw two shapes in different colours in the same position was a straightforward and visually compelling way to do so. Friedrich Kittler’s Transmediale Keynote’ The Finiteness of Algorithms’ influenced this project. In the talk, Kittler describes the differences between mathematics in general and programmed processes within a computer, known as algorithms. Only a small fraction of what can be expressed mathematically can be computed.
The distinction machine is an example of a task which can be calculated, can be represented on the level of the interface but creates something utterly uncanny for the viewer — a look inside the inexplicable nature of the machines which are designed to look so natural to us.

What challenges did you face for its development?

Something that I spend a lot of time on was gaining a better understanding of when and how the computer creates these patterns. Something I noticed quickly is that the patterns are deterministic. The same machine in the same setting creates the same patterns. It would have been terrific if this hadn’t been the case, but it is. Through a large number of small controlled changes, I was also able to get an intuition about when the patterns are created and in what way. I studied this phenomenon similar to the way a scientist would research an animal or a plant.
Through small adjustments, I observed the system’s behaviour. Such a perspective is an interesting one to me, exploring technology itself as an entity with which I could experiment. My built-up intuition changed once I did the same experiments on my phone. The resulting patterns shifted entirely.
Though a series of interviews with computer scientists I discovered that the patterns seem to depend on the graphics card of the computer. As both shapes in two colours are requested at the same time, these patterns are a result of where within the graphics card the request is processed.

Problems of these kinds are called race conditions within computer science. The resulting images can be seen as visualizations of the flow of electricity through the graphics card.

AI, machine learning, Google Magenta…,  are transforming society and the creative application of these tools open new possibilities in artistic creation; how do you think new inventions (like this) are impacting the landscape of art?

This question depends very much on your definition of art. For me, art is not just the usage of new tools but rather a critical reflection of these tools. The role of art is not only to explore the possibilities of a medium but to reflect its boundaries.

Art should ask: if these tools transform society, how are they doing it and is this the transformation we want? So for me, machine learning and more broadly artificial intelligence are topics to develop a critical stance towards. We should ask who is claiming to build AI and for what reasons? What does ‘learning’ mean in this context? And isn’t our embeddedness in the world, the way we act, the ambiguity in which we continuously operate, extraordinarily different from what these machines are doing?

Do you see AI more as a tool or a creator?

Maybe rather as a brand or a religion. From a capitalistic viewpoint, AI is currently the next branding after big data. Our technological advantages and changes are vast, transforming nearly all cultural dimensions; the need for terms like ‘big data’ or ‘AI’ is due to simplification. It is easy to talk about a lot of data; it is easy to speak of a superintelligence. It is difficult to explain the real technological and cultural shifts that are happening. At the same time, we are creating our techno gods.

We no longer fear the gods who look down on us from heaven and see our sins. But we fear that the data our phone collects unravels our wrongdoings. We fear a machine that is taking over the world. The desire for artificial intelligence reveres technology while at the same time underestimating biological, psychological, social and cultural realities.

From programmable matter, 3D/4D printing and biological design, and the human interaction with digital interfaces, the material seems to be more and more blending with the digital. Where do you think we are headed in terms of the new digital materialism?

The Distinction Machine provides a viewpoint in-between the processors and the processes. The digital is often thought to be detached from the underlying material.
We distinguish between software and hardware; this distinction amplifies the mysticism of the digital. All digital processes are analog. The distinction machine is one path making the analog visible within the digital.
The images produced are the result of flows of electricity through the silicon of the graphics processing unit. Not only are the digital images of the distinction machine the results of analogue processes, but the visual manifestations depend on the physical configuration of the graphics card being used

Currently, I’m interested in getting my work away from the screen and out of the two-dimensional.
Thinking about the space and the embeddedness of the interactant is a fascinating step after working on projects which only lived online. metaLAB Harvard is a robust research platform in this respect of making such installations possible.
I still have one or two more projects that are in the making which align with my previous two projects Artificial Senses and the Distinction Machine. All of these pieces have in common that they question the medium of the computer and, with that, the latest developments in data mining and artificial intelligence. From there on I have some loose ideas around data, visualization, and investigative operations but no specific projects yet.

Sometimes I think travelling is the biggest ally of creativity just until the point I realize that I’m getting very little done while I’m away from my studio. Just now I’m packing for three major exhibitions at the Cooper Hewitt in New York, the Wro Arts Center in Wrocław Poland, and a show at the Ars Electronica Center. Many new things will come up during my travels, but I’m already looking forward to having some calm days in my studio space.

Website wwwkimalbrecht.com/vis/
(Photos and gifs courtesy of the artist. This interview was first published on 13/06/2019)