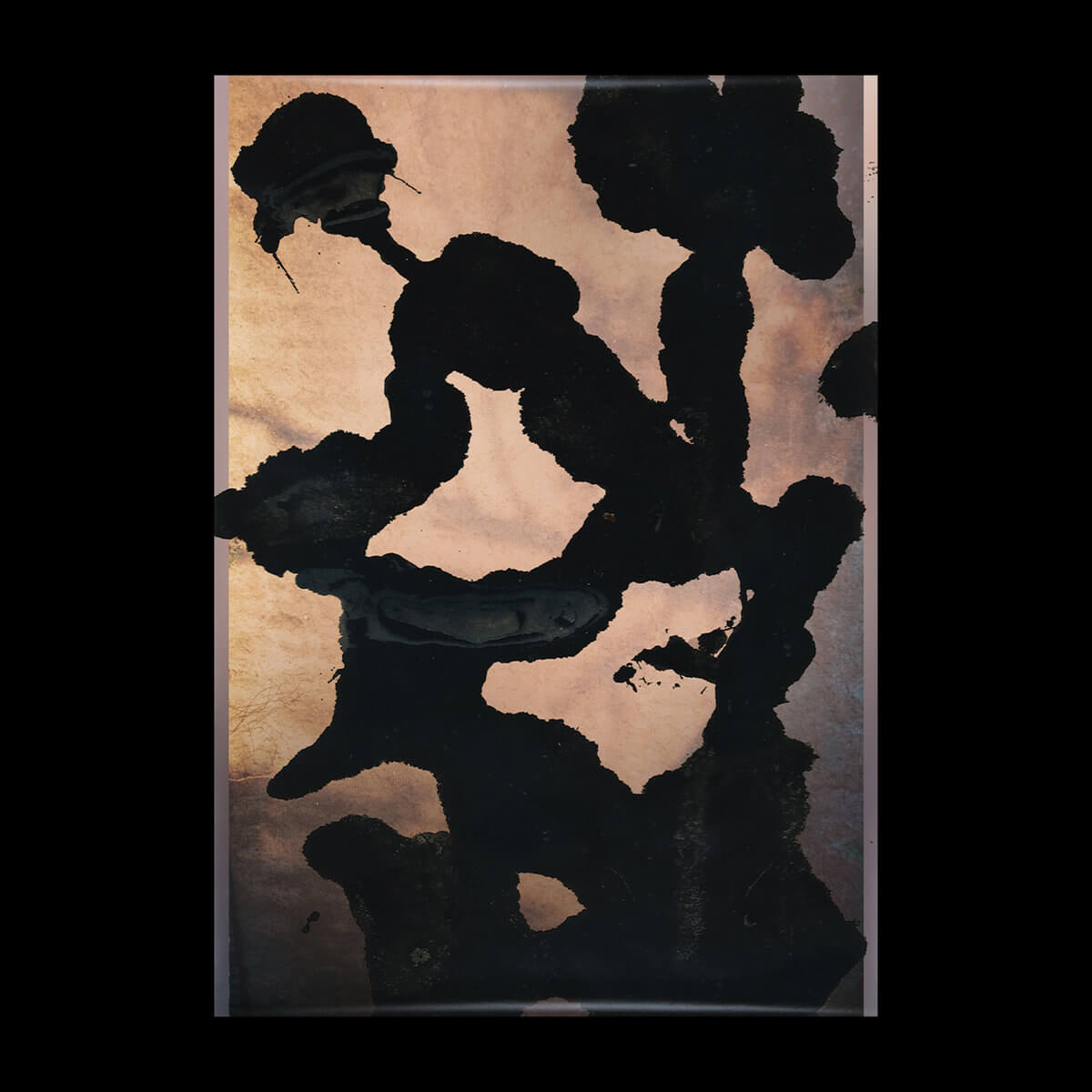 My introduction to Kepla’s work came through DeForrest Brown Jr. An artist I’ve recently written about for CLOT Magazine and an article that might make a good partner for reading this one. Their collaborative work, particularly Absent Personae Postscript, got under my skin in a way that futuristic aesthetics or dystopianism rarely do – if only because these ideas have been firmly explored.

The Absentee Personae record, as well as the rest of their collaborative practice, stuck with me because of the way that it utilised the different tools to engage the viewer/listener. The visual component for the aforementioned work pulled me into the idea of racial industrialisation, informative without becoming didactic and honestly human without coming anywhere near saccharine. Their work put me in a challenging position as a white writer attempting to comment on work produced so directly in response to a PoC experience, particularly one with this level of grounding in social theory. It made me think about a particular aspect of white privilege – the ability to essentially blank from racial identity. This work made me conscious of my whiteness, conscious of the role that plays in the industrialisation of PoC and an experience that I can only be informed of, always abstract to my own.

In his most recent release on Alien Jams, Within The Gaze, A Shadhavar, Kepla worked only with samples and field recordings available within online libraries and archives. The innumerable volume of pre-existing audio recordings on the internet can often seem daunting, a challenge to begin to penetrate and actually make pragmatic use of. Kepla refers to the record as a return to collage – generating no new sounds to work from and instead, manipulating what’s already there, a structural dissonance is achieved in the sound. At times, the breakdown of sonic information begins to resemble an mp3 played back at exceptionally low quality or the audio for an old mobile phone video (without becoming lo-fi at any time). This sort of resampled, overlaid, damaged and combined aspect to audio production goes some way towards emancipating themselves from their previous contexts, going some way towards reflecting their position on the internet. These structureless sounds were once the recording of an incident, a space or a time and have since lost that identity entirely. They’ve become material, manipulated and appropriated to produce something new.

Thinking about this approach to making music as a reflection of saturation is useful. We’ve come to think of the material as something to be interrogated, to be rationalised and contextualised through its previous life. This material, utilised by Kepla, is detritus – valueless aural flotsam integrated as a sonic material, not as a contextual marker. This methodology separates it from a satirical or didactic imagining of collage and instead presents it ultimately as meditation on the malleability of material experience.


Words and interview by Allan Gardner


My first contact with your work was through your previous piece on The Wages of Being Black Is Death (2018), a collaboration with DeForrest Brown Jr. Could you describe the process of collaborating with DeForrest?

The process with DeForrest has changed according to the needs of the project, and I don’t really know how much describing it does justice to the way that this collaboration has deeply affected me as a musician and a person. The basics is that we share samples, beats, field recordings, and bits of music we’ve been listening to and somehow collage them together. But since our live performance together last year at Cafe Oto, and subsequent iterations of our practice it’s been more about becoming finely tuned to an intimate consonance between ourselves and a provocation towards the audience. This has manifested itself in lots of different ways, from discomfort and antagonism to pure joy, which I felt truly during a PTP fundraiser night in Ridgewood, New York.

What’s at the heart of our collaboration is conversation and working things out in different environments. DeForrest and I have gone through a lot since we first came into contact around 2015, and I think the music we’ve made is by no means magnum opuses because I have absolutely no interest in doing that. It serves as a document to me and an offer to any listener that the sounds resonate with.

What inspired this project, or working together generally? Would you care to expand on the themes that you explore together and your relationship to them?

We just got talking online. I was interested in his writings and so we talked until we knew each other a bit more personally. I received a commission opportunity for a literary performance event in 2015 and offered to work with DeForrest, where we began with the idea of him as a digital spectre and ended with reflecting on the mutability of blackness in response to the violent superstructure of capitalism and white hegemony. I think the concept has remained throughout, but the angles have changed through each version.

I wouldn’t say I have a direct relationship to the themes in our work, but it has allowed me to reflect on my performativity as a white-assimilated body. An anecdote that my family likes to remind me of is when I declared wanting to be British and stop speaking Cantonese at a young age, and throughout my life, I’ve just about managed to be seen as white due to my name, accent and education. The structural racism of liberalism and the West forces you to adapt to survive; in hindsight, I’ve ironed out my ethnic eccentricities enough to live without thinking about it, but the way structures like borders, culture and the arts industry employ identity means you’re provoked into responding to cruel situations.

In a similar vein, working on longer-form collaborative projects is likely to influence your solo material. What role does undertaking these shared works play in your solo productions?

I can’t imagine my creativity without collaboration or dialogue, so perhaps this solo work is my attempt to work with forces surrounding me that are intangible. Beyond my work with DeForrest, I’ve had the pleasure to make music with and for brilliant artists like Farhood, Nathan Jones and Jade Montserrat, composing sound that embeds into their stories and performances.

In your new release on Alien Jams Within The Gaze, A Shadhavar you’re working entirely in field recordings and samples, referred to as “salvaged”. What relationship are you trying to cultivate between these two elements? Is it a conceptual coalescence or more focused on the sonic aesthetics of the recordings?

I started working with samples in free sound packs as well as recording stuff from my web browser, just as a way to get started with manipulating audio into different textures. It rarely occurs to me to go walk around and point a microphone at things, there’s just so much sound that’s recorded and left unheard online. I consider much of the sounds as salvaged through trawling for banal sounds to use with no specific aim. Also, it was important for me to weave in sounds from documentaries and talks from various things that inspired me while writing this record.

I’ve seen your recent material referred to as collage, but for me, it differs sonically from what I typically recognise as musique concrete or sound collage. There seems to be a consideration for the actual quality of the audio, or more broadly, the musicality. Could you talk a little bit about his new record’s aesthetics? The duality of collage and the distinctly musical tone of the work, specifically.

I considered it a collage because I know all of the sound sources are secondary, and I wanted to assemble the sounds sequentially across a broader space of time than I had previously worked in. I don’t really see a conflict between musicality and collage, and the quality of the audio is perhaps a lucky accident or just the sounds I’m attracted to. In fact, I tried to distance myself from a sense of musicality, but if you found an aesthetic resonance then that’s completely welcome.

Returning to collage, I was inspired by artists like Elysia Crampton and Chino Amobi by what Adam Harper called Epic Collage Music. I’m not interested in fixing an ident to my productions in the way that they do, but hopefully, as my work progresses, and has progressed, distinct textures and emotional ambiguities remain constant. I already feel like I shy away from structured beats or sonic pile-ons, and I tend to work towards using tone in a fairly modal fashion.

What is your hope for the viewer, with this new work? What would your ideal reaction to Within The Gaze, A Shadhavar be?

My hope is really a plurality of reactions, and although this may come as dodging critique I’d be interested to hear what people thought about and felt while listening to it rather than whether they thought it was good or not. To me that’s being Within The Gaze, to be reflecting inside.

Isolation. But creativity comes and goes, and I don’t force myself if I’m in listening mode.

Lots of things and friends, our lives are really precarious.