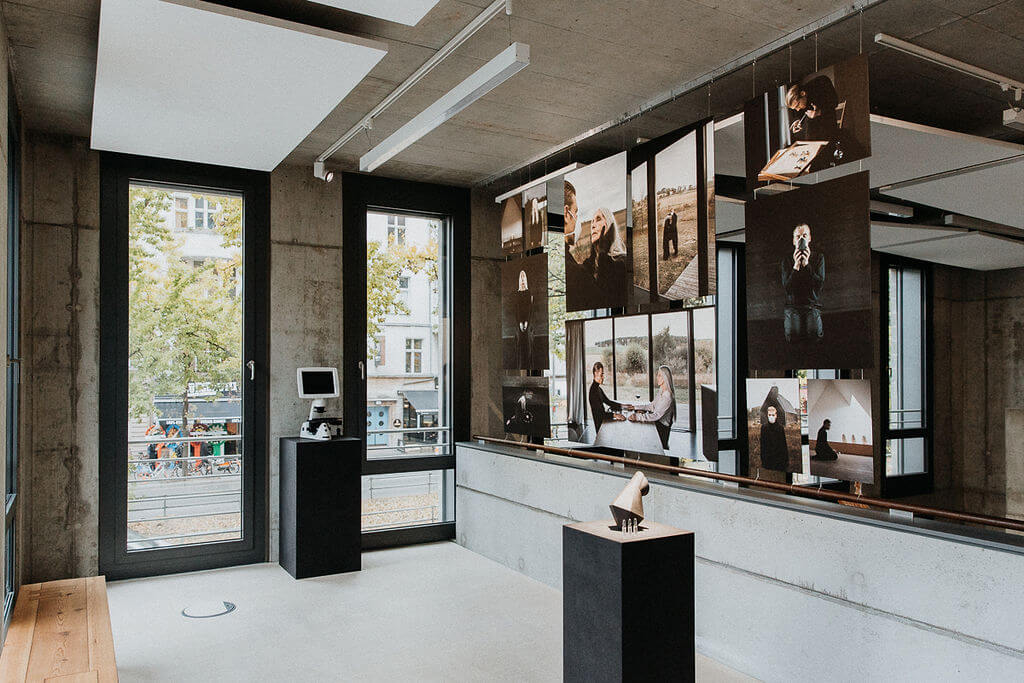 Johanna Teresa Wallenborn has worked all over the world – from Seoul to Los Angeles, and now Berlin, where she is acting as curator for STATE Studio. Johanna is a cultural producer, curator and project manager, who works at the intersection of art, technology, architecture, design and sound.  STATE studio Berlin is a new participatory gallery that is currently hosting the ongoing exhibition ‘Field Experiments’, which explores themes that include Genome editing, synthetic biology intelligent machines and bioeconomy. Although STATE Studio has only recently opened as a gallery space, STATE itself has been around since 2014, with the title encompassing a festival and an agency alongside the current exhibition space.

STATE is where scientific research meets artistic expression. Its previous festival incarnations have emerged thematically – in 2014 exploring ‘The State of Time’; in 2016, it was ‘The State of Emotion’, dealing with scientific and technological breakthroughs at the interface between emotional research and artificial intelligence, touching on their social implications as well as possible future developments.

Crucially, STATE Studio provides a space for an open exchange of ideas, where collaboration is key, and ongoing processes of development supersede the finished product. This reflects the sentiment of their ongoing exhibition series Field Experiments, which presents the studio as part exhibition space, part forum for experimentation, and part functioning laboratory. Field Experiments imagines a future in which humans have extended their lifespans through genome editing, offering a kind of geological journey through future spaces, and featuring the work of scientists and interdisciplinary figures including  Emilia Tikka, Marco Donnarumma, onformative, Veronika E. Natter, Michel Erler, and artistic research project Farming the Uncanny Valley.

This mixed media exhibition is paving the way for future shows which form part of the series, which from January, will include ‘Algature Workshop’ with Fara Peluso. Here, visitors will be invited to participate in a workshop that centres around the cultivation of algae, through speculative design and DIY biology. This workshop forms a part of Living Canvas – a project realised in cooperation with Solaga and supported by Innogy Foundation – where Peluso fuses an energy-generating algae biofilm with cutting-edge technology into a wall-mounted installation growing in real-time.

In this sense, STATE Studio is a unique space that realises new ideas in tactile, collaborative forms – brought togetherby the STATE Team and Johanna, who has conceptualised this environment that brings together new life forms in an inclusive setting. In this way, she asks us to collectively imagine not only the future state of living that awaits us, but also offers a public audience the chance to decide how they want to construct their future existence, as it is articulated by this collective of visionary artists and scientists. 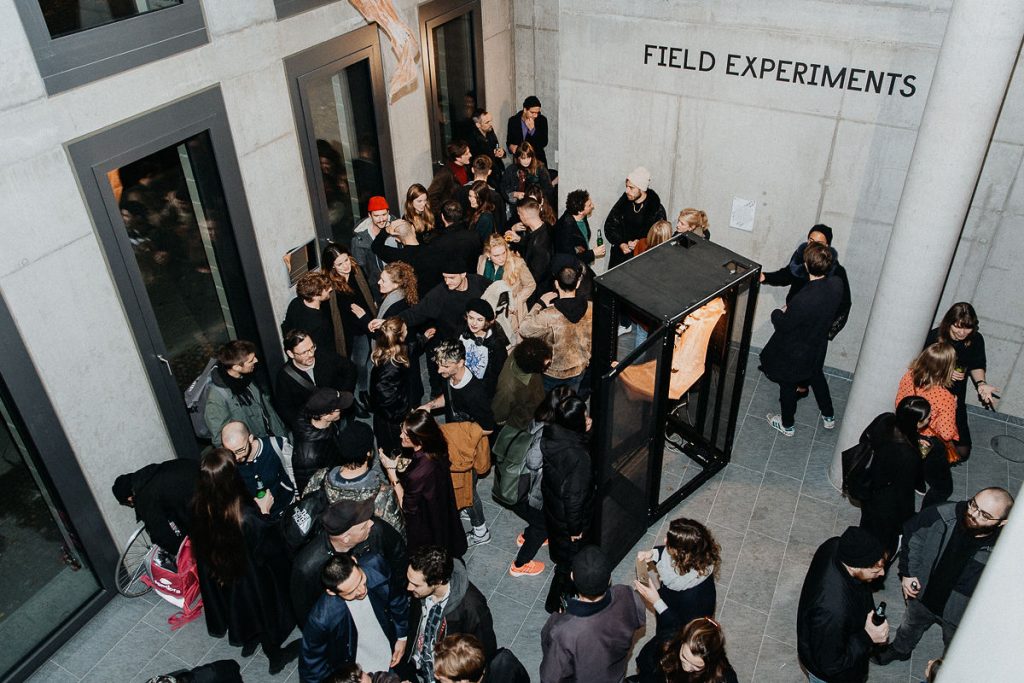 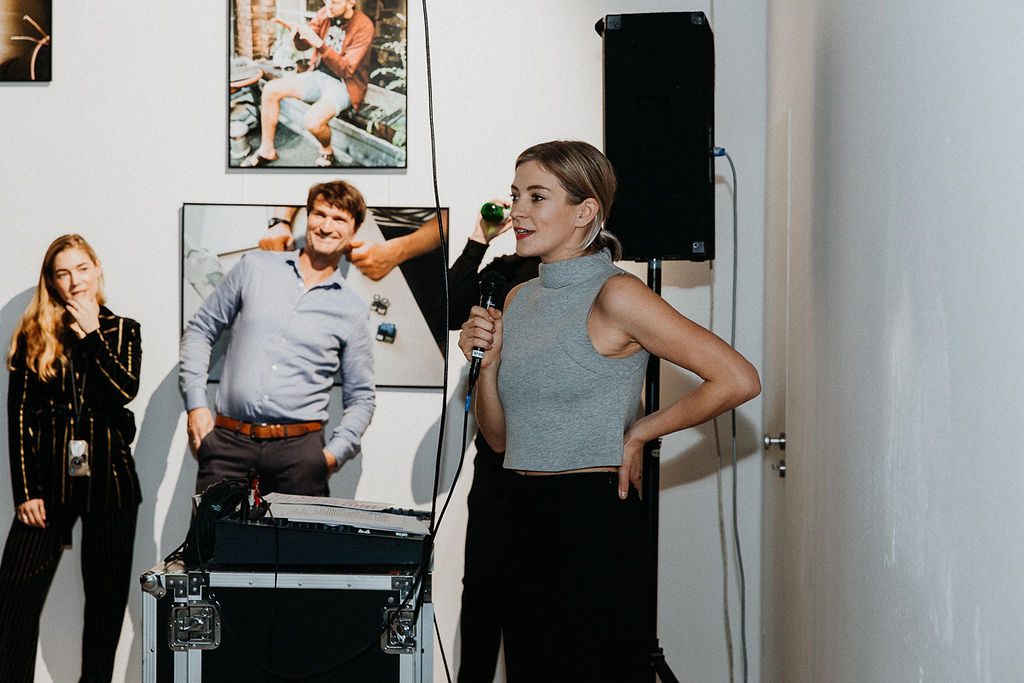 For those that are not familiar with your work, tell us a little bit about your background.

STATE is comprised by an interdisciplinary team of creatives and scientists with backgrounds in physics, philosophy, media and the arts. I think it is exactly that unique mix that defines us and shapes our work. We started off with the first festival in 2014 on the topic of time, continued with another festival edition on the science of emotions in 2016 and curated a pop-up gallery in Los Angeles last year.

Why did you decide to bring STATE Festival to STATE gallery space and what are the main aims behind it?

STATE Pop up Studio LA and STATE of AI exhibition were a milestone and a turning point for us and essentially the beginning of STATE Studio Berlin. While working on our Gallery in Los Angeles, we fell in love with the idea of running our own space, hosting exhibitions and being able to be in a constant exchange. Having a permanent home holds plenty of new possibilities, next to continuous program having an ongoing dialogue we are also able to reach a more diverse group of people. We engage with young and elderly people, passersby and curious school classes and are now in touch with a much broader audience. It allows for a discourse on eye-level, including experts and laymen equally.

What was the biggest challenge you faced in its development (apart from finding the funding)?

Finding an appropriate space was definitely a tough one. The landscape in Berlin has been changing quite a lot.

What makes STATE Studio different from other exhibition spaces?

STATE Studio is a space where future developments can be discussed in the here and now. The aim is to reflect on the consequences of research developments on a societal and philosophical level. With Field Experiments we are placing them in an experiential exhibition, shedding a light on what’s to come.

Participatory exhibits allow for interaction and feedback from the side of the audience, such as Farming the Uncanny Valley, an interdisciplinary research project with the University of the Arts Berlin, Fraunhofer Umsicht, YOU.SE and is funded by the Ministry for Education and Research. Six different artists and designers developed prototypes exploring new forms of communication and participation in the bioeconomy in light of a sustainable future. We want to find out how we can imagine such a future bioeconomy together, hence we invite our visitors to interact with the prototypes on different levels, e.g. by tasting different raspberry aromas raising questions on what we deem authentic and leaving their personal thoughts ideas and impressions.

The feedback is feeding back into the project and helps us to improve our means of interaction. On a more general level, all our complementary readings and exhibition material are written and designed in a way that makes it understandable for experts and non-experts alike, no matter what age. Through introductory questions, we want to involve our audience and motivate them to reflect with a critical eye.

What does STATE want to bring to the audience?

We want to make people curious again. By showcasing works of artists, designers and researchers alike our aim is to open up some of the black boxes that surround us and create a dialogue around innovations and research. With STATE and with our exhibition series Field Experiments, in particular, we hope to foster opportunities to experience, discuss and co-create possible future developments already today. Through the program next to the ongoing exhibition such as workshops, readings, and panel discussion each project is introduced and offers a curated deep dive into the topic.

Field experiments is your opening exhibition. What was the intellectual process behind it?

Bringing together arts, sciences, society but also the business end of things is of foremost importance to us since all these components are crucial when we talk about a shared future. In contrast to the residency and the previous festival editions we wanted to create space where current developments can be discussed and experienced, no matter if it is an artwork, a speculative prototype or a new technology fresh off the lab bench.

This means that Field Experiments is curated in a more open kind of way, touching upon different topics that will or already do impact society now. So in a way Field Experiments is an experiment in itself. It is an ongoing series, while currently exhibiting works that discussing genome editing, biotechnology and artificial intelligence we have new works coming in next year while other exhibits will stay with us a bit longer.

I am still quite excited about the artist residency program we started this year with Max Delbrück Center for Molecular Medicine in the Helmholtz Association and their CRISPR Laboratory. The next residency is in cooperation with Fraunhofer Institute and will kick-off next year, the open call just closed today.

For me as a curator, I enjoy the challenge of bridging disciplines on the one hand and being really close to the artistic process on the other hand. There is so much to learn for all sides, the researchers, the artist, and the curatorial team and it is a fertile seedbed for science communication in general. I believe artists and researchers have tremendous power and responsibility. We are here to help shape the discourse around.

Experiments – It might sound cheesy but I truly believe in experimentation. It dares to you to go one step further and it is the source of all innovation.