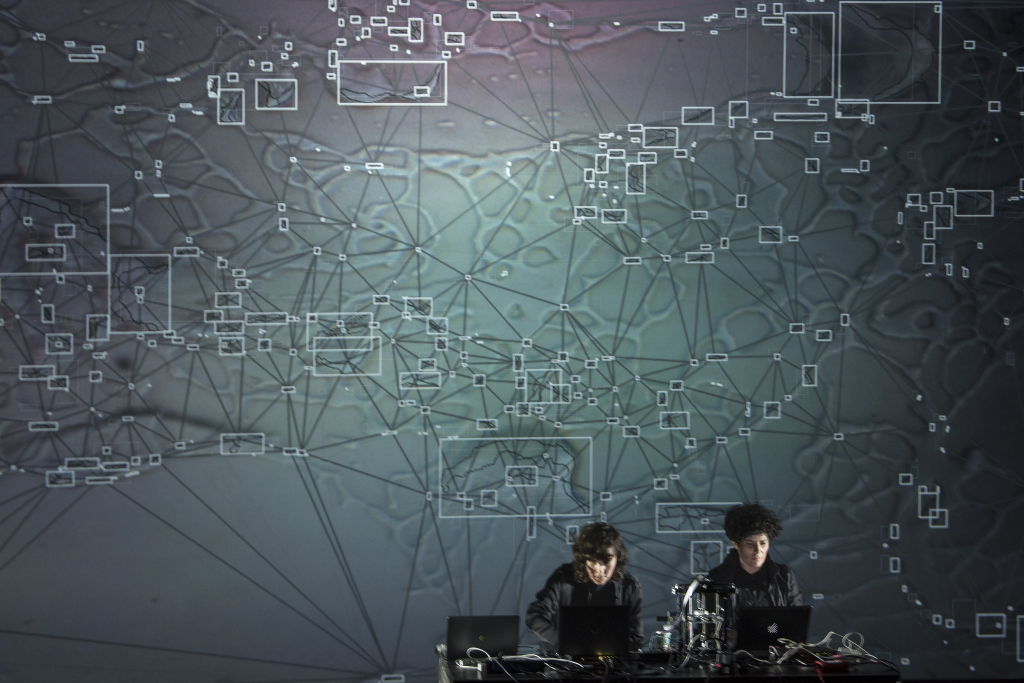 Interspecifics are a nomadic and independent research collective, founded in Mexico City in 2013,  experimenting with the intersection between art and science. Deeply intertwined and determined by their Latin American context, they take on precarity as a challenge, which sparks creative action and thinking. Since their start, they’ve used sound as the conductor of their research, combining it with AI to try and understand the bioelectrical activity of bacteria, plants and humans. More recently, their research lines have been shifting towards the realm of consciousness and the relationship between mind and matter; all the while, the sound remains their interface to the universe.

Their creative practice and method revolve around their Ontological Machines, a collection of DIY and custom-made sets of hardware used as experimental research and methodological tools. More than that, they are also a framework for them and other artists, philosophers, scientists, humans, organisms or forces to collaboratively explore the entanglement of material experiences that conform as unity the complex expressions of reality.

Interspecifics understand communication beyond the anthropocenic lens, beyond language. An example of this is Micro-rhythms (2016), a bio-driven installation and interspecies system where small variations in voltage inside microbial cells generate combining arrays of light patterns. Then, a pattern recognition algorithm written in Python detects matching sequences and turns them into sound. Another ontological machine that explores interspecies communication is Speculative Communications (2017), which is part of a research space for non-anthropocentric communication and part of a non-human intelligence auto-generative system. In this project, a machine observes and learns from a microorganism and uses the data from its behavioural patterns as a source of composition for an audiovisual score.

One of Interspecifics most recent works is Recurring Morphing Radio (2020), a generative neural audio production system fuelled by the most consumed genres on digital music platforms. Taking inspiration from Alvin Lucier’s sound art piece I am sitting in a room (1969), RMR is a metaphor of a cultural process ideated by the capitalist market that has a homogenising effect on the aesthetics of music.

Central to the collective’s practice is their embrace of Open Knowledge. They believe knowledge should be established as a common good in the community’s service and understand its dissemination as a political practice and a form of artistic creation from which everyone could get inspired. For this, they organise and design public workshops where they share their Open Source developments to serve other artists-researchers’ purposes and allow for more profound research in similar areas with the same tools and languages.

Interspecifics are on a constant quest to know more about how reality is shaped, considering the relation observer and observed share as part of the same phenomenon; a unique entity in constant indetermination in which the moment of conscious observation entangle us opening one of all the infinite possibilities that weaves in front of our eyes. With equally strong parts of technological implementation and philosophical search and using AI and sound to bridge beyond language, their practice and their ontological machines strive to expand human perception and make us more empathetic and sensitive to our environment.

For our audience that is not familiar with your work, who is behind Interspecifics? Could you tell us a bit about your background?

Interspecifics is an Independent artistic research bureau founded in Mexico City in 2013. We have focused our research on the use of sound and A.I. to explore patterns emerging from biosignals and the morphology of different living organisms as a potential form of non-human communication. We have developed a collection of experimental research and education tools we call Ontological Machines with this aim. Our work is profoundly shaped by the Latin American context where precarity sparks creative action, and ancient technologies meet cutting-edge forms of production. Our current research lines are shifting towards exploring the hard problem of consciousness and the close relationship between mind and matter, where magic appears to be fundamental. Sound remains our interface to the universe.

Leslie Garcia and Paloma López founded the collective, and later, Emmanuel Anguiano and Felipe Rebolledo (Chile)  joined the collective. We have several collaborators, such as Thiago Hersan from Brazil, Carles Tardío Pi from Barcelona, ​​Mariana Perez Bobadilla also from Mexico and Fernán Federici from Chile. With whom we have developed specific projects and collaborations.

Usually, communication is understood through a very anthropocenic lens, while Interspecifics explores communication beyond language and focuses on inter special communication. Tell us a bit about some specific projects you have dedicated to this and how technology can help open new doors of perception.

For us, communication goes far beyond the human linguistic process. We understand it from a perspective ––appropriated from engineering––in which any energy transmission conveys information. And if it is possible to decode and transduce that energy, we essentially have a communication process. Also, from neuroplasticity, we’ve learned the brain’s ability to receive any form of experience as long as it is electrically delivered.

These ideas––which have several decades in the imaginaries of science fiction––inspired us to imagine possible communication interfaces that could link non-human agents and physical phenomena to the human brain. And of course, it was precisely the technological democratisation of our days that has allowed us today to make these processes a reality. Much of our work goes into understanding technology and finding applications outside its utility functions. To expand human perception and make us more empathetic and sensitive to our environment.

All of our projects meander around this subject, but Speculative Communications encompasses many of the main questions and could be the best example. Speculative Communications is an exercise whereby means of expanded vision through a machine with computer vision and artificial intelligence, we look for morphological patterns, deciphering and finding meaning in those morphologies in a hypothetical manner.

Your project “Energy Bending Lab” interprets the electricity generated by microorganisms and turns them into sounds. How was the process to translate that bioelectrical activity into sound, and what do you think it tells us about the universe’s vibration?

The EBL was the first meaningful project of the collective. It was developed conceptually with a grant from ICAS (International Cities of Advanced Sound) within a mobile residence between, Brusells, The Hague, and Tromso in 2014.  And carried through as part of the Phychip project at the Bauhaus University in Weimar in 2015. This context allowed us to share ideas about bioelectricity and its presence in all living organisms and led us to speculate on the idea of ​​a universal language that occurs outside the linguistic strata.

The device is quite simple, a modular synthesiser with bioelectric amplified cv ins. We designed it in Eurorack format because we were interested in integrated ecosystems with other instruments. With the Energy Bending Lab, we produced a series of sound improvisations entitled Non-Human Rhythms. These compositions use a specific organism, whose electric pulses serve as the clock and the tempo that feeds the entire sound system. We like ideas like String Theory, and, in a way, this project is a tribute to the belief that everything in the universe vibrates.

One of your most recent projects is the Recurrent Morphing Radio, commissioned by HKW as part of their The Disappearance of Music festival. It is a piece of generative sound art that you describe as “a metaphor of a cultural process intervened by a capitalist market with homogenising effects on the aesthetics of music”. Can you tell us about the intellectual process behind it? How does the RMR work?

For the development of RMR, Interspecifics have employed computer models such as Recurrent Neural Networks (RNN) to build an automated system using OpenAI’s Jukebox, SampleRNN, and Wavenet, among others to deconstruct musical structures according to their original characteristics. The most popular sounds on stream platforms serve as a basis for training the system into generating new materials, which are, in turn, subjected to the same treatment repeatedly, hence its name. Apart from continuously producing music, the system generates the titles and selects the order in which every song and list is played. It uses Markov Chains, a type of discrete stochastic process in which the probability of an event occurring depends only on the immediately preceding event.

Recurrent Morphing Radio found inspiration in Alvin Lucier’s sound art piece I am sitting in a room (1969). A repetition exercise in which the recording in layers leads sound to acquire shared materiality with the resonance of the space, in this case, the network and its latent space. The sound sometimes emerges spectrally as a blurred memory of gestures, instruments, and voices. A kind of plunderphonic generator with a certain cyber-surrealistic voice resulting from the interaction with technology and the cultural mechanics of consumption.

Throughout the years, you have collaborated and worked with scientists on different projects. How do you approach these collaborations and what makes the synergy between artists and scientists so interesting, and what can they offer each other?

In our case, most of these collaborations were beautiful synchronicity encounters. Meetings lead to endless chatting on questions that matter for both of us, not as artists or scientists but as human beings. In this sense, despite the differences that our practices may have, we’ve always found a common territory in which to build a sense of our world. Since that common ground usually involves developing certain technology, most of the time, it is in this technological development process, even just conceptually, where our knowledge and concerns converge. We can offer each other the possibility of building spaces to mirror our perspectives.

A big part of your collective is the dissemination of knowledge, which is an intrinsic part of your methodology with the design of your public workshops. Why is this so important, and how does it tie to your Ontological Machines?

Knowledge dissemination is primarily a political practice, establishing knowledge as a common good in service of the community. At the same time, it is a way of understanding educational practices as a form of contemporary situationism. Making participants part of creating that knowledge allows space to build and discuss experiences and find a shared reality together.  From our perspective, the only way to fully acquire knowledge is through experiencing something as a phenomenon. To delve into its origins and becomings.

In this sense, our pieces allow for an ontological relationship with the spectators and the phenomena that we materialise. It is a process of intra-action where the agency and expressiveness of these phenomena are woven with the spectators’ perception and experience, without losing sight of the fact that everything that happens in this process is the result of the very spectator’s observation.

Specialisation in any subject. Creativity is multidisciplinary by nature; it requires information to connect and develop. Specialisation limits and kills creativity.

You couldn’t live without..?

Without curiosity, which is a very powerful engine to keep us searching, asking questions, speculating, and looking for new ways to navigate reality.