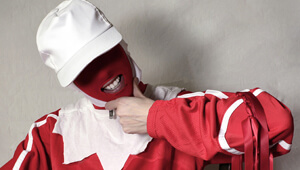 Gazelle Twin, aka Elizabeth Bernholz, last album Pastoral (Anti-Ghost Moon Ray) features dreamy synths and voices, in a hallucinatory schizoid stat that announces more a curse than a blessing for the society we are living in.

Bernholz use of voice alterations is parallel to those in horror movies, psychophonetic phenomena and Konstantin Raudive’s EVP. The vocal processing re-enacts a state of multiple personalities which are used to hide her identity and gender. Bernholz comments about it “With Pastoral, I am taking that to a pretty extreme level, considering multiple identities and particularly the clichés of the culture I grew up in”. The androgynous voice is connecting to the non-human, whatever they represent, robotic choirs, demons, or alter-egos of an idyllic past. Sometimes, the voices are in a more metaphysical level, like in another dimension questioning about the being. As in Burroughs, the toxicity of voices in viral layers links to a corrupted body identified with the infested techno-capitalist dominant world, which Bernholz critiques. The voice is repeating its words with no answers in a constant questioning, to lead audiences to an unknowing and contradictory state.

In Pastoral the artist uses old English instruments, such as recorders, harpsichords and flutes. Also, folk elements and early traditional music are present, for example in Over the Hills, where Bernholz introduces the British folk song “Over the Hills and Far Away” and in Dance of the Peddlers, where she uses flute and hilarious and cruel voices, to spread a distorted, hypnotic and repetitive message. The electronics are mainly rhythmical bass, within the use of distortion, and kick drums. Hobby Horse comes back to the taste for repetitive and distorted lyrics, this time combined with an absent bass and layers of tiny noises. Sunny Stories is exemplary with the use of electronic synthesis and messianic voices.

In Gazelle Twin, much of the influence comes from Fever Ray, and her playing with disguise and costumes in an idyllic natural utopic state of the post-natal new mother. Furthermore, Bernholz’s narrative is harsh and radical and criticises the concept of the Nation, like in Dieu et mon Droit where claims this contemporary state of poverty and slavery. A toxic element is present throughout the album against a political estate where abuse of power comes as no surprise. In demand to protest and confront, Bernholz addresses issues related to the media world in an alienating techno-capitalist planned obsolescence and selfish consumerism of media devices.

The latent influence of England past centuries is used as a para-spiritual, ritualistic and esoteric invocation, as Bernholz answers “I like to imagine and conjure other worlds when I create and experience music”. The English satire is present too, and following the Hogarth’s grotesque style Bernholz ridicules the upper classes of the ruling order. In belligerent anger against Britishness, Pastoral presents a psychedelic countryside, seen in Tea Room, as a landscape of confusion and criticism because of the postcondition of a mediated world where lyrics repeat “We are living in a cartoon, in a pastoral picture”.

Bernholz creates her own garments, videos, and prepares stages for performances. In her videos, she uses contemporary genderless apparel within an androgynous aesthetic, which resembles a posthuman embedded non-human. Bernholz’s secret identity with masks, disguise and costumes, hides her oneness underneath the form of an uncanny jester who poses as a trans-feminist, post-genderless, androgynous, mystic and terrific creature. The mystique elements of a far insular tradition are narrated in an ambiguous past/future dimension, recreating an unanswered timelessness where to remember the future and imagine the past.

Pastoral is anxious and uncomfortable, awkward, unpleasant, sick and harsh. The dark electronic music is full of droning instrumental elements creating a sorrow ambience. From the Avant-Pop with notions of the industrial and noise, the album is a darkwave hallucinogen album with influences of the ambient style. As a result, it is an example of the visual and musical aesthetic of a new dark age where the panic, fear, risk, awareness and threats of mass capitalisms are used to criticise the elite of insular power, in the hands of those few stands the decision of evolving.

Words and interview by Laura Netz

In the video Glory and also throughout your most recent album Pastoral there’s a good amount of medieval references, which sacred elements from religion and the English medieval tradition influence your music?

I have strong memories of learning about The Tudors at primary school, I loved the romance of it all, the high contrast patterns, the colour schemes, the music. And later as a teenager I really got into mediaeval choral music and chant. They really knew how to brand religion back then. Despite all the blood and murdering.

I like to imagine and conjure other worlds when I create and experience music, after all, music provides a way to exist on a completely different plane. I don’t think my music has particularly sci-fi elements exclusively, I think that probably comes from using synths and electronics to produce my stuff, but I am more interested in using all kinds of sound to say different things.

The critics connect your work with an English tradition of grotesque satire and critique. What do you want to reveal with this?

I feel it’s important to acknowledge what the elements of my identity are – where and how I grew up, my race, my sex… I ask whether it is one of privilege or one of exclusion or something else more blurred. With Pastoral, I am taking that to a pretty extreme level, considering multiple identities and particularly the cliches of the culture I grew up in. I like to break down what might seem widely accepted or “normal” and uncover what is unusual and strange within it. Very often this reveals ugly truths.

We talked about the video and the themes of your music, but how do you position yourself as a female artist in the scene of electronic music nowadays?

I try not to consciously make it a point of being “female”. Unless I feel it’s absolutely relevant. I’m not really into breaking down the categories of electronic music into genders, though I do of course support the rise and equality of women producers. Part of my use of costume and performing in other skins, or characters, is to get away from that whole quandary and try to present something bigger than the perimeter of my flesh. I’m more interested in enabling total immersion into a mood.

Your music has plenty of distorted lyrics, dark atmospheres and electronic loops and it has frequently been associated with Ballardian dystopias. Which are your references and influences? Where do you draw inspiration from?

Well, I have lived and breathed the writings of Ballard since I was about 18, but Ballard himself write from actual, lived experience and his observations of everyday life, which is what is most frightening about it really. The elements of fantasy in his writing are often light relief!

I think you only have to look at the present state of the human species to realise there is a wealth of material to draw from, no matter what you do. Some of it good, most of it bad.

What can we expect from your next concert at BBC Late Junction festival, EartH, London?

The London show on the 28th of February will be my first London full-length presentation of ‘Pastoral’, having had to cancel the show last year due to illness. I am really excited to be performing in a new venue and to be associated with such a wonderful radio series. The show will be intense and hopefully, offer an immersive experience to the audience.

Lack of sleep / lack of time.

My husband and our son.