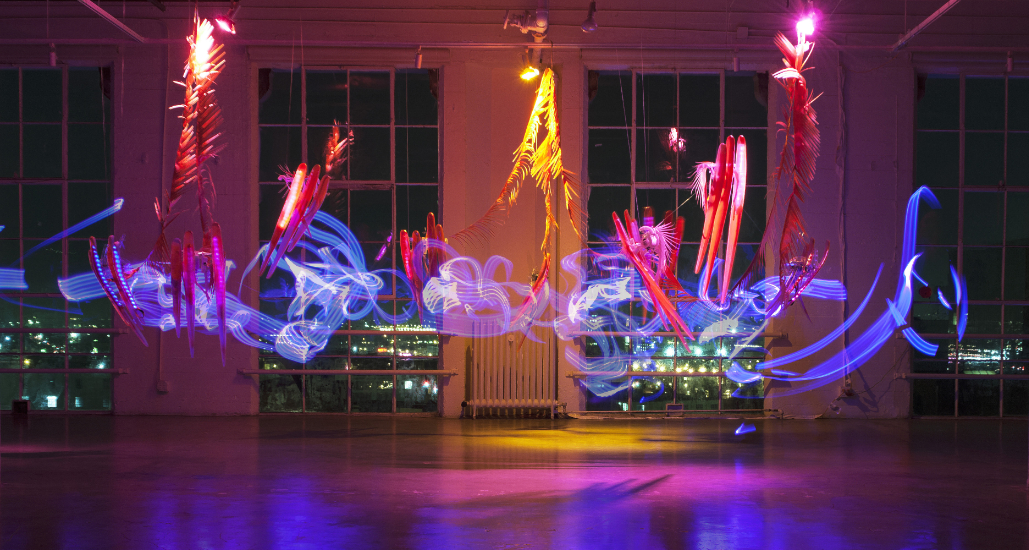 Formally trained and practising as an architect, Filipa Valente develops her cross-disciplinary practice between experiential design and architecture. Her interactive and immersive installations seduce the observer and play with perception by exploring surface, space and form.

Her creative work looks at creating relationships between our bodies as users, the spaces that we inhabit, and the environment around us. It allows her to explore multiple crafts and technology disciplines differently in each installation.

Starting from an experiment with building façade systems, Liminoid Garden was inspired by plants and nature. Still, it consisted of an interactive machine interface between the environment, the city and its users. The installation was composed of a series of elements that collected environmental readings, measuring data such as CO2 pollution levels and light intensity. The data cause the blooms to react differently in terms of how they move and fluctuate LED lights.

Her interest in tracking the body resulted in the installation HYBRYDScope – a space, light and sound immersive interactive scopic experience. The purpose of the installation was to give a feel of what was going on around the city, in real-time, to LAX airport users.

A viewing interface that designs ‘hybrid’ relationships between installation users and the abstract/recognisable city fragments of sound and image. The installation users were not only changing image, but they were also changing sound as they moved.

The use of environmental sensing, which interfaces with architecture it’s not new. It has been around for a while already, mostly for developing smart building façades that respond to the environment.  But there are still multiple other possibilities to be explored when it comes to the design of buildings and their relation with the users.

For those who are not familiar with your projects, how would you describe your work?

My art practice comes hand in hand with my experience as an architect and designer. I like to think of my work as an exploration of relationships between architecture, the body and the environment. I use experience design methodologies and interactive and media art to create physical installations beyond physical space boundaries, making invisible connections with broader contexts and where people are at the center of the experiences.

Throughout your practice, you have explored different disciplines. What are the common aspects of your work as an architect, experiential designer and media artist?

In all these roles, the common denominator is I always design for people and with people experiences in mind. I am driven by the possibility of using technology and art to activate emotion and create more meaningful experiences in architecture and environments.

Liminoid Garden sheds light on the pollution levels in the cities by reacting to them. What were the main challenges during the creative process, from the concept to the final work?

In Liminoid Garden, the most significant challenge was designing and fabrication of the multiple mechanical blooms that held electronic controllers, sensors and motors for movement. The concept implied that the pieces should feel organic and lightweight while also displaying the hardware in an elegant and integrated manner.

To solve problems like this, I like to embrace the practice of rapid prototyping and testing with friends and colleagues as the users, sometimes with different materials and sometimes at different scales. After various design iterations and prototypes, the solution came in custom 3d printed shells explicitly designed to fit the hardware used.

Your project HYBRIDScope is an immersive experience. Can you tell us more about the inspiration and intellectual process behind it?

HYBRYDScope was born out of an interest in creating ‘windows’ from static indoor urban environments into outdoor landscapes in motion. I thought of instances where, as a layover passenger, sometimes you end up in new locations without seeing or experiencing the place because you cannot leave the airport.

I was inspired by the idea of allowing layover passengers in LAX airport to be able to have an immersive experience of the city of LA while waiting in an airport lounge. The project was a prototype for an interface that moves away from traditional screens and creates a more immersive viewing experience.

The footage collected is from clips of people moving through the city (on a bus, walking, riding a bike, in a car…), and this footage was projection-mapped onto a sculptural element. To create a more immersive experience, a kinect sensor collected tracking information and allowed the user’s bodies and movements to manipulate the sound and clips.

The result was a unique personalised way of connecting with the city beyond the airport lounge, hearing the sounds, and seeing people’s sights and things in motion.

In your opinion, what changes in the art scene will emerge in the next ten years?

I believe the art world is already at a stage where we are continually surprised and awed by new exciting works. Rather than ten years, I am excited about what will come out from the experience of living through a pandemic that has left us constrained in our houses, sometimes unable to produce the work we used to do and having to improvise and evolve our practice as artists and designers. I already see humans’ adaptability, making a severe change in how we experience art and divulge it.

Not being brave enough to try things out. I believe the best work comes from embracing possible failures and not being afraid to experiment and try new things.

The ability to shift between concepting things on paper and making 3dimensional things. The two complement each other in my practice and drive my interest in design and art.