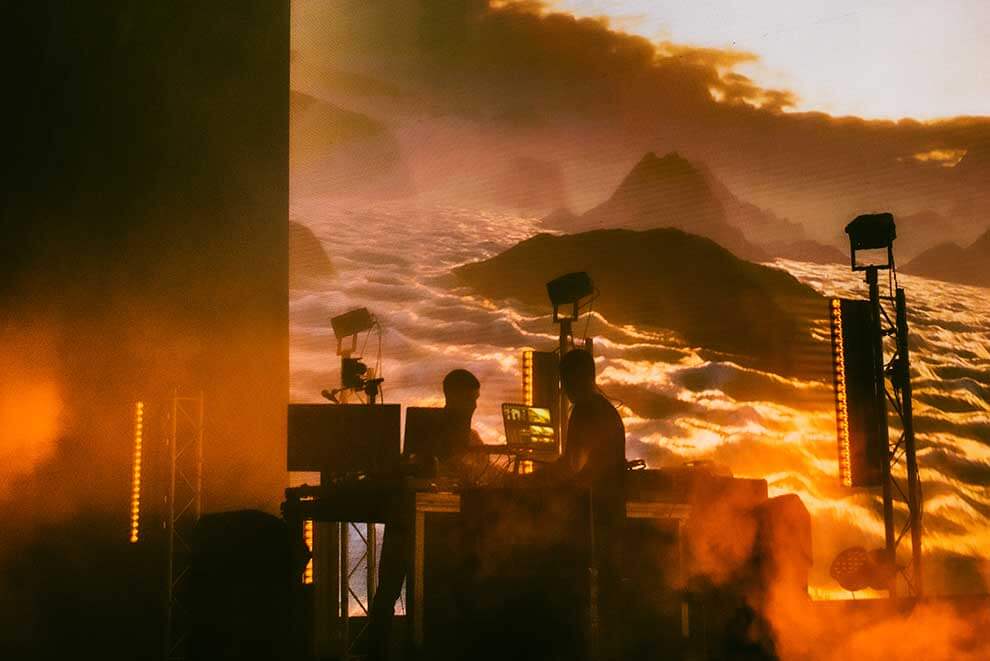 Born in 1996, Ezra Miller’s design practice has risen into the public eye rapidly. The recipient of an ADC Young Guns prize at just 20 years old, Miller has collaborated with some of the biggest names in fashion including; Balenciaga, Alexander Wang and Adidas.

Focusing on real-time visual experience, Miller creates situations in which graphic events are set in motion without determined outcomes. Generative algorithms are created to run infinitely, predetermined parameters put in place to ensure that the visuals remain cohesive but beyond his, there is no means or planning the exact aesthetic outcome of these works.

Working with camera feeds, Miller is able to mirror the audience and their environment as a means of extending the space of performance. When collaborating with live acts, like Objekt, this practice encourages a blurring of the line between digital and physical space, expanding the venue and the experience. Similarly, Miller has worked with narrative elements. Producing a visual accompaniment to live music in advance of the performance using midi triggers to produce tightly choreographed aesthetics in real-time, whilst maintaining indeterminable outcomes through the self-generative algorithms.

Ezra Miller’s most recent project to debut takes the shape of a visual collaboration with Berlin’s Objekt. As part of the new live show, Miller has produced a visual analog to the set that attempts to create a dynamic environment mirroring the cadences of the audio, rendering environments in real-time that unravel and alter in time, interlocked via midi triggers.

The aim of the collaboration was to meld Miller’s more abstract works with a figurative narrative, one which would encourage a deeper engagement with Objekts dynamic live set – from glitchy, abstract tracks through to the more traditional approach to techno, the visuals produce environmental mirrors to the atmosphere of the music and provide a greater context within the performance environment.

Miller has developed an impressive lexicon of digital practices – as well as a client base to go alongside them. His continued desire to innovate and push the medium of live visual manipulation foreshadows the potential for further immersive environments, functioning as a means of re-contextualising experiences with music, fashion and environments in real-time. The potential in Miller’s work is one for the production of alternative reality experiences existing outside of the VR sphere, augmenting our perception of space and activity through a myriad of constantly innovating digital processes.

Art director, designer, artist, you are a multifaceted creative, for our audience that is not familiar with your work, could you tell us a bit of your background and how the interest in design and digital art came about?

I was always interested in art, design, and music. My dad is an artist and so art was an integral part of my experience growing up. I was always good at math, and I started teaching myself to code in 2013 after being asked to make a website for someone. From there my interest in learning to write software developed once I discovered Processing, Three.js, and GLSL for writing shaders. I think I leaned hard into digital art since I’ve been pretty much addicted to using computers for my whole life.

In an interview, we read that you discovered coding and generative art just a few years ago. What did you find most fascinating about it and what did it bring to your creative process?

For me, the most fascinating thing is the idea that I have control over certain parameters and absolutely no control over how things turn out. My process is often simply about setting things up that I let run their course – fluid simulations, generative algorithms that run forever, moving digital paintings, they’re all just created from a set of starting conditions and have no real end. They’re also able to be made infinitely complex with sets of rules. For me, this is the most exciting thing about using digital tools and writing software.

Your creations take on natural elements but also light has a very prominent play, where do you find your main inspirations?

I find a lot of my inspiration from travelling and living in different cities, as well as from photography and paintings. I think just walking around a city with a camera and documenting the colours and textures of a place is one of the things I get the most inspiration from.
That as well as studying natural elements and phenomena, and finding ways of relating those things to the digital, generative worlds I actually know how to create.

One of your recent creations has been the visual component for Objekt’s new live show. What was the intellectual process behind the inception of the show? And the main challenges behind its production?

The process behind the show was about trying to come up with a way to visually represent a journey through different worlds to match the dynamic live set TJ created. I also wanted to experiment with new methods of combining pre-rendered and real-time generated content, as well as a tightly synced A/V performance.
TJ mentioned initially his interest in creating visuals that had some figurative elements, and weren’t just abstract geometric shapes or colours like a lot of techno visuals can end up becoming.

The music in the set is so varied and I wanted to find a way to match each visual well but still tie things together, so that involved thinking of different places to travel through, physical scales to move in and out of, from microscopic to cosmic, and different types of media to create and animate.

At the core of both the visuals and the audio performance is the balance between form and formlessness, as a lot of the show involves moving in and out of a recognizable image into something abstract or formless, in the same way, that TJ will transition from one song to another with a noisy, glitchy breakdown, or trigger a set of pulses or bursts that take the audience to an entirely different sonic world.

Your work is well balanced between the more artistic and more commercial commission. How do you find this good balance?

Well, it’s a tricky balance to strike sometimes since you have to make certain sacrifices in both spaces. For me, it’s about finding commercial work that doesn’t make me feel disrespected or taken advantage of by a larger company or bureaucracy, and working with brands/studios that give me creative freedom.
But I really live for the fulfilment of creating personal work and doing collaborations with other artists, especially the recent Objekt show. I’m lucky I can sustain that via commercial work.

My graphics cards and my friends, I love them both so much.