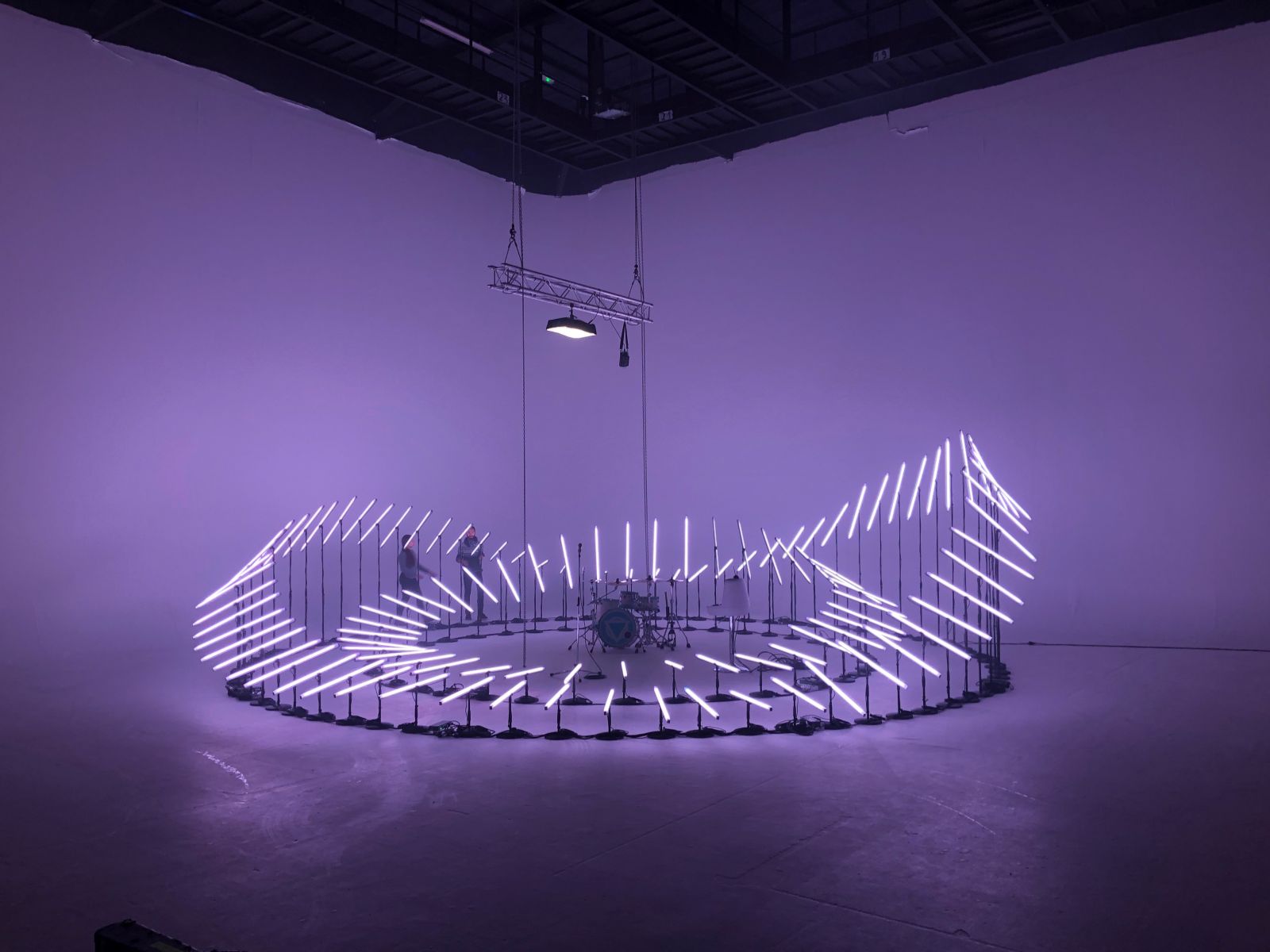 Through a synthesis of technology, art and music, the members of Collectif Scale seek to unearth links that unite music and visuals, light and architectural design, entertainment and contemporary art, nature and the future, man and machine. Over 10 years of mastering their craft, Collectif Scale has developed an intimate artistic language of their own, celebrating the raw force of nature whilst embracing technological progress and its potential to bring forth creative innovation. A poetic audiovisual meditation on nature yet untouched by humankind, one of Collectif Scale’s most lauded installations – Physis – offers pure sonic immersion to the public, showcasing 10,000 LEDs and 26 large plates in the shape of a rift, which interacts directly with electronic music played by DJs.

When asked to categorize their work, the members of the collective refer to themselves as creative technicians, speaking of their practise as electronic visual art – that is to say the capacity to formalize an idea so that it becomes a living visual object, dynamic, interactive and often tangible.

Indeed, in their immersive wonderland of augmented art, created out of ever-changing sonic landscapes and dynamic visual objects, the public is no longer merely a passive observer, becoming instead a key actor in Collectif Scale’s techno-poetic paradise, with the opportunity to experiment and experience the freedom of unhindered exploration. While it is undeniable that the work of Collectif Scale conjures contemplative spaces and emotional reflection, it is the physical impact [that] is the most important. It probably sounds strange, but it also explains why we love video games, roller coasters, funfairs and so on. The emotional impact is direct and simple. The public only has to live and play with it. This playful and sensitive aspect of creativity is at the heart of Scale’s creative philosophy, alongside their inexhaustible thirst for new and unknown terrains of technology use.

Bringing together their individual knowledge and skills, the members of Collectif Scale have dedicated their creative lives to enhancing the music scene with mesmerizing light designs and immersive visual art, their work being an ode to imaginative play between different artistic mediums.


Behind Collectif Scale stands a highly talented team of ten people, spanning a wide variety of different professional and artistic backgrounds. Your work juxtaposes motion design, research, robotics, programming, LED mapping, light architecture and a number of other disciplines to create mesmerizing scenographic installations. Could you tell us more about your creative philosophy? Given the many creative influences that guide your artistic practice, how would you categorize the work of Collectif Scale?

As Scale is a collective composed of members from different origins, backgrounds and personalities, there’s no other choice than to produce installations by mixing disciplines, mediums and ideas. Each production is the result of the combination of those multiple ideas brought together. We don’ t have any rules but try to respect some guidelines: let’s do it with fun and desire, otherwise [let’s not]; let’s do something [exciting] and new, otherwise [let’s not]; let’s do it by using new technologies, even if we don’t know how they work, otherwise [let’s not]. Basically, Scale is not the name of a technical company or agency. Scale is just the pseudo of a visual designer, and this designer happens to be a collective of friends. As we produce different kinds of installations, from scenic scenography for live shows to pieces for art exhibitions, we don’t like so much to describe ourselves as artists but as creative technicians or just scenographers.

When speaking of your work, you often use the term ‘augmented art’. For our readers who are less familiar with the concept, could you tell us what the term means, where it is situated within the arts landscape and what it stands for within the context of your own creative philosophy?

In general, people are talking about digital art, but we think that this term doesn’t make sense today because most of the art pieces are now produced by using a digital process. Digital art sounds to us like a very old name from the 2000s, so we decided to talk about augmented art because it seems more appropriate to our work. The idea of augmented art suggests that we create something by using and stacking different mediums. For example, regarding our installation Ammonite, the first layer is the architectural design – two rings of 112 strips of 1m, precisely organised to describe a mathematical and organic structure of 10 m. Then we add a second medium – light – because those 112 strips are made of RGB LED strips. At the end, the global process is to enhance a design, try to make it alive with an additional and interactive medium. In that case, I think we can talk about augmented design. In the latest version of Ammonite, we can differentiate more than 2 layers. First, we start with the architecture, then we add interactive light, then the interactive music generated by a mechanical piano converted into a kind of arcade game for the audience. In the end, we can identify 4 mediums: architectural design, light, music and video game. During the last weeks we have been talking about that idea of augmented art. Then, by analogy to the electronic music, we probably found something better: electronic visual art. It seems to be at the same time a very generic and precise term, and probably more representative of our work.

Speaking of the way human beings experience and understand the world, both visual arts and music have a powerful potential to build and shape contemplative spaces for the public; to bring forth an emotion, be it a conscious or an unconscious one. Is that something that Collectif Scale thinks about when developing its projects?

When we [start working] on something new, for sure we think about the audience and its reaction. But in the end, we don’t think too much about the emotional or contemplative potential. As we are a collective, we have probably become our best audience. What’s most important to us is to surprise ourselves and make each other happy. Then, if a creation seems to us contemplative and emotional, it can be too for the audience. If we are talking about emotion, the most important thing for us is to produce something playful, simple and accessible. We don’t want the public to have to understand something or engage in a complicated process of reflection to enjoy a piece. Even if each installation is full of meaning and reflection, the physical impact is the most important. The form is more important than the content. It probably sounds strange, but it also explains why we love video games, roller coasters, funfairs and so on. The emotional impact is direct and simple. The public only has to live and play with it. We only want the audience to smile after seeing our installations as we are very attached to the entertaining and playful aspect of our work.

Physis is one of your most lauded installations. Made out of 10,000 LEDs and 26 large plates, which interacted directly with electronic music played by DJs, Physis offered a mesmerizing audio-visual experience for the public. What were the driving forces and inspirations behind the project? How was the dialogue between the visuals and the sound determined?

Physis is like a mountain, or more precisely like a rift. A rift is a break provoked by the movement of the ground and the tectonic plates. It’s a very inspiring topic for us since the result of this natural phenomenon is the unpredictable creation of shapes. We just decided to explore that idea and design an installation to celebrate the force of nature. Then we gave it life, or illusion of movement, by using light and video mapping. Topologic, Ammonite, Nautilus, Physis, [and others] – all these installations are inspired by the elementary and original nature, before the human appears on Earth.

As described with Ammonite before, Physis was elaborated on with an addition of layers, or mediums, in order to create a full polyvisual object. The first step, and always the longest one, is to create the architectural design. In the case of Physis – a modular scenic installation. We had a lot of technical constraints: maximum weight, modularity of the size, security, fire resistance, assembly time and others. It’s imperative to integrate these constraints as soon as possible into the artistic process. When we are satisfied and confident with the structure, made [out of] wood in the case of Physis, we think about augmented visual mediums (e.g. light or video), and imagine how they can reinforce and improve the design. In the end, the light and the video mapping are generated in the same way by using a dedicated program, developed by us. [It] allow us to create fine interactions between light, video and sounds. As Physis is an installation dedicated to live electronic musicians, we made the choice to develop a program controlled live by a «technician-artist» from Scale for each presentation in order to play with the musician on stage, to establish a real dialogue. We also think that AI or an autonomous program wouldn’t be as efficient as a real human brain in that precise case, because we don’t know the music in advance. A real person can also include the mood of the audience in its play.

CODA is yet another installation of yours that received highly positive feedback from the public worldwide. It showcased a futuristic performance by twenty robotic arms, each equipped with 1-meter long LED bars. Can you tell us more about the intellectual process behind the project and the themes you wanted to explore? Where did your visual and conceptual inspiration come from?

The starting point was to work around the idea of lighting choreography, and to create a piece [resembling] a dance show or a ballet, where we would replace the body of dancers by robots and light. At the end, many people see in CODA a reference to pop culture, including Star Wars and video games. They are totally right, because CODA is probably the result of all these inspirations from very different cultures. CODA is a perfect synthesis of the last 10 years of learning and experimenting. Even if we had the idea 3 years ago, we could never have produced it because of our lack of skill and the accessibility to robotic technologies. We are happy because it really marks the end of a period and the start of something new and very exciting. CODA is probably our best cocktail of poetry and technology.

The enemy of creativity is money. Because when you create only for money, you probably produce something very boring and impersonal.