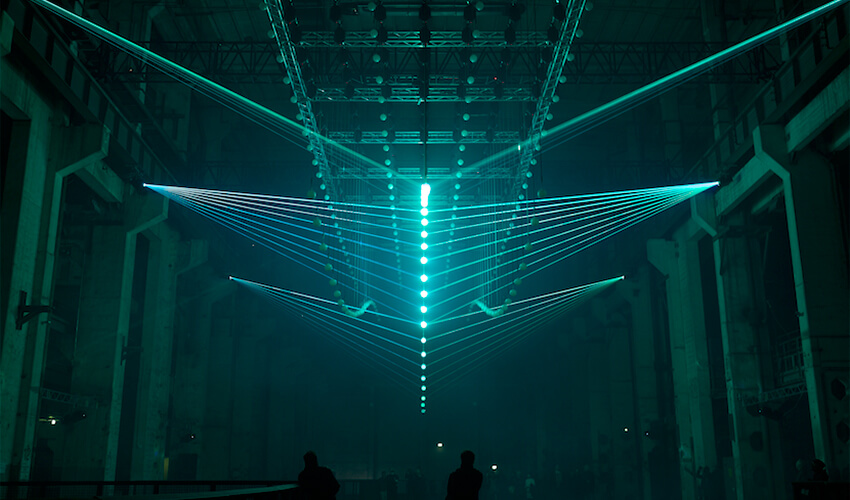 CHRISTOPHER BAUDER, unfolding the allure of light and motion

Christopher Bauder is a media artist and interaction designer living and working in Berlin. His work in large scale spatial art installations began following his graduation from the Berlin University of the Arts. His work is focused around the translation of the digital, electric and intangible into physical, phenomenological and experiential environments – and vice versa. The works are an interplay between these two worlds, an experiment in their similarities and differences producing an interactive space situated within an interaction between spaces.

Bauder is known for his production of the city-wide light installation entitled Lichtgrenze (2014) commissioned for the 25th anniversary of the fall of the Berlin wall. The work took the shape of nearly sixteen kilometres of illuminated balloons, running from Bornholmer Straße, alongside Mauerpark and eventually ending at the Eastside Gallery. It functioned not only as a representation the division once present not only in Berlin but between the East and West of Europe but also a showing of the communities formed in the quarter of a century following the destruction of the wall. The temporary installation (lasting two days) encouraged the festive atmosphere present in the streets, illuminating the walk along the trail of a landmark once representing unrest and distrust within the European community, as well as Germany.

In 2014, Bauder founded WHITEvoid, a multidisciplinary art and design studio. Consisting of specialists in interaction design, media design, product design, interior architecture and electronic engineering, the studio was founded through necessity, with the aim of providing a space in which to realise large scale interactive art and design environments. Recently moved to a beautiful and inspiring location next to the river in Berlin, the studio balances between artistic creations and commercial productions. All of them suffused with a pushing forward innovation (there are several teams of engineers developing new kinetic systems and software) and elegance. A fine example of how art and advanced technology can interact to form the most exquisite works.

During July and August of 2019, at Kraftwerk Berlin, Bauder is presenting present the rarely seen audiovisual installation Deep Web (which was premiered at CTM in 2016). A collaboration with musician and composer Robert Henke, the work will take over the industrial space entirely, creating an enormous amorphous light sculpture in which viewers are immersed. Coupled with multi-dimensional sound, the environment visualises early digital communication in a way which aims to create a significant sensory experience. So far more than 10.000 people have already visited the installation, with live performances taking place on the 25 and 26 July.  In these live performances, in the words of Bauder himself, where the magic and majesty of the piece unfolds completely.

Your background is in interaction design and your work involves kinetic lights, lasers, computing, programming… how and when did the fascination with them come about?

During my master studies, my overall exploration was the nature-culture divide. Our disconnection from nature comes from our creation of the artificial. The loss of an untouched natural world has forced us to manage our surroundings as an artificial environment, a new nature. Trees, plants, animals, atoms and the climate are increasingly controlled and governed by humans. The technological environment becomes so complex and uncontrollable, that we start to relate to it as a nature of its own. I would argue that the divide is not binary, nature is a cultural construct which involves the coexistence of the artificial. Nature is a subset of culture.

DeepWeb is an impressive kinetic sculpture and audiovisual show, envisioned for monumental spaces such as Kraftwerk, where it was presented first. What was the intellectual process you developed for the inception of this piece?

The term Deep Web commonly refers to the unindexed, unsearchable and widely unknown part of the internet. This idea of extensive hidden data scapes and communication networks underneath the common and well-known surface inspired the storyline for the Deep Web installation. Nodes and connections as the basic elements of network communication defined the look of for the visual system. The kinetic spheres and laser light connections help to recreate a computational form as a physical entity made out of pure light.

What were the biggest technical challenges you faced for its development?

The biggest challenge on the technical side of DEEP WEB is the synchronisation of lasers and kinetic spheres while everything is in full continuous movement. With my companies WHITEvoid and KINETIC LIGHTS, I am developing a very precise motor winch system and control software for many years. This system allows us to position the 175 spheres with a repeatable precision of 1mm in space. Then we have a special software calibration system in place that we developed together with the German high-end laser manufacturer Laseranimation Sollinger to sync the lasers with the spheres. In combination with their high precision lasers, we are able to follow the moving spheres in realtime. This means we can alter variables of our pattern generation algorithms at any time and the laser beams will automatically follow. The kinetic spheres are also ended points for the laser beams. So its also a safety question that the beams can never glitch off the spheres and eventually hit the audience. Then there is the realtime connection to Roberts music software Ableton LIVE that adds another layer of complexity. All in all DEEP WEB is a huge and complex network system that needs to work flawless and in complete sync. But in the end, the audience should not be aware of all this and just marvel at the beauty of the show 😉

Skalar, one of your recent pieces, explores the impact of light and sound on human perception. In this piece, you incorporated kinetic mirrors, which you’ve also used in Apologe (2017). How mirrors and reflection modulate the light design? and what they bring to overall effect?

For SKALAR I wanted to experiment more with the properties of light and modulate those to trigger certain emotional reactions in the audience. By additionally using kinetic mirrors I am able to bend light beams in mid-air. A function normally not possible. This allows me to redirect beams of light, while at the same time changing their properties like intensity, beam size and colour. With this precise control over the light, I am able to create architectural and very geometrical forms, that I can then dissolve in an instant to very organic and emotional tableaus of pure light.

What sensations do you want to bring to the audience interacting with Skalar?

For SKALAR my musical collaborator David Letellier (Kangding Ray) and I were using Robert Plutchiks wheel of emotions as a basis for the creation of our show elements. We tried an artistic interpretation of 8 basic human emotions like anger, happiness, sadness and so on. For each emotion, we selected a certain kind of music, light colour, movement and overall atmosphere. This combination of audio-visual triggers would then evoke certain feelings or associations. Of course, it’s just our own interpretation and not a scientific approach and people often associate different things with certain colours or sounds, but overall I think we managed to move people in a very intense and unexpected way. Visitors told us they forgot about time and space when they were in the show and often experienced profound feelings of various depths. So I think we succeeded in our mission to use very abstract artificially created impulses to trigger quite natural human sensations.

My collaborative artistic projects are mostly created as large scale three-dimensional audio-visual live experiences. This high complexity is hard to imagine as one thing right from the start. So each project starts out with a visual kinetic idea that I scribble and sometimes prototype first to check the general feasibility. I develop the necessary technical components and software tools with my design and engineering company WHITEvoid. When I am sure that the idea can be realized technically, I meet up with Robert to discuss the storyline and we bounce initial sound and visual pattern ideas. For me, Robert’s sound is the core element of the whole experience. With his music, he triggers and sculpts deep emotions which are then amplified and complemented by the visual side of the piece. So early on there is a very strong link and mutual influence between his music and the three-dimensional abstract patterns created by my kinetic installations. This is also mirrored in the synchronized development of control software for each artistic piece on the sound and visual side. The part that I like most is when for the first time it all comes together and Roberts music is directly driving the perfectly synchronized visuals. At this moment, the whole installation starts to unfold like one big beautiful living organism.

Are there any new technologies you’d be excited to incorporate in your pieces?

I believe I am quite at the forefront of visual technology and often develop my own machines and software tools because the effects I wand to achieve are not possible with existing technology. So I am not so much looking for the next big technological development to incorporate in my art pieces. Technology is always just a facilitator to transport my ideas, its never in the centre or used for the sake of using a certain technology. I am always following new developments but I am very careful not to follow obvious trends. I am rather looking for new ways to use “old” technology or use technology in a way people have not seen it yet beeing used. Any technology is just a material that I use to create my own vision, I am quite open to adapt anything that helps me to achieve this.

Its very simple: lack of funding. My creations are very large and expensive to make. My imagination is limitless and technical possibilities today are virtually endless. So the only constraint I am facing when I imagine a new art piece is the financial funding. I always have to adapt to what the available money allows for.

It’s my reliable partner in creation, communication and computation. The basis of all my work and an integral part of my life. I am really happy to live in a time of worldwide networks and almost limitless processing power.