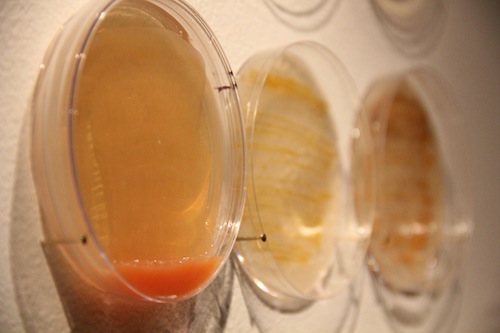 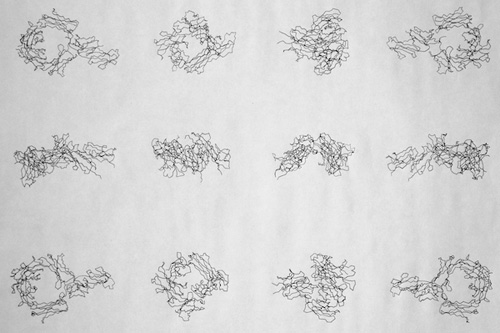 Christina Agapakis —biologist and artist— explores new scenarios in order to question the relationship between humans and bacteria. Human microbes, evolutionary biology, cheese and scent are some of the words that define the central themes of Agapakis’ project. Selfmade is a project made in collaboration with Sissel Tolaas that involves making cheese with bacteria that help produce body odour. She collects these bacteria from the human body, mouth, toes and armpits.

Agapakis uses synthetic biology and critical thinking as tools to envisage future scenarios that provide a creative interpretation of how humans interact with all microscopic life, particularly with bacteria.

I recently read The Mirage of Health by René Dubos, which starts off with a discussion of how we’re always stuck between a utopia and a golden age. On the one hand, we tend to romanticize previous periods as golden ages where things were simpler and carefree, and on the other, we fantasize about a future utopia where everything is perfect and all our problems have been solved. This can make it very hard to answer questions like this, but also points to what I like and dislike about our present time. I like how our utopias can drive curiosity and passion for science and technology.

But I also dislike how our utopias and golden ages narrow our capacity to see what’s around us in the present. In technology, we focus so hard on solving problems that we don’t take the time to really understand problems – who is this a problem for? Who will benefit from our solution? What besides technology do we need?

I think the best ideas can come from starting out on new projects with new people or just chatting over coffee with my very smart friends. Deadlines and loneliness are good for getting projects done but not for starting new ones.

If you had to give up one of your five senses, which one would it be and why?

Humans have much more than 5 senses. We can sense the position of our bodies in space and the passing of time. We can feel pressure, temperature, and pain. I’ve even seen itching described as a distinct sense, so that’s the one I would give up.

“Wait until you have tenure.”

I just learned about a really interesting symbiotic relationship between paramecia and bacteria that totally blew my mind. There are some paramecia that can kill other paramecia by releasing a toxin into their environment.

The interesting thing though is that the toxin isn’t made by the paramecia themselves, it’s produced by a virus that infects a bacteria, which lives inside the paramecium! I’m fascinated by these weird symbiotic nesting-doll relationships and I’m endlessly surprised by the creativity of evolution and the complexity of microbes.