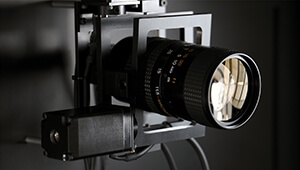 After a career as a robot-dancer, computer scientist, and choreographer, Christian Mio Loclair subverted his “nature imitating machines” practice into an exploration of nature by humanising and naturalising the “unnatural”. In this era of technological advances which is completely shifting how we perceive what it means to be human, Loclair, the founder of Waltz Binaire, focuses on analysing and discovering the convergence of man and machine in the contemporary context. This exploration of the biological and digital intersection consequently offers a mirror into the contemporary identity of our society.

One of the studio’s most recent projects, Narciss, is on display in the public gallery, showroom and event space STATE Studio in central Berlin. As the place promotes creative synergies between science, art and innovation as well as promotes artists and researchers exploring breakthrough developments that shape our cultural futures it, therefore, acts as a perfectly appropriate new home for the project.

This work developed by Waltz Binaire is an artificial intelligence installation which is programmed to reflect about its own existence. Utilizing Google’s Tensorflow framework, the experimental display aims to translate the self-portraits of a digital body into lyrical guesses by exhibiting a performance of digital consciousness.

The aim of the experience is for the visitor to observe an artificial intelligence whose only purpose is to investigate itself by which the viewer witnesses a synthetic model of self-awareness performed by the machine that shows signs of a fragment of artificial narcissism and a fictional character formation in its own autobiographical narratives.

By exposing the capabilities and current interest to humanising machines, the Narciss project offers a good insight into today’s interest to develop extensions to our biological consciousness by designing additional neural network and mimicking the short-term memory of the human brain. This is not to say that the technology is creating an even bigger gap between our digital and physical world, which is the view currently dominating in the mainstream society, but it rather aims to showcase that such an advancement in our technological capabilities can also offer a new perspective into understanding our biological existence.

You are a  media artist and choreographer whose interest lies at the core of human bodies, movement and nature colliding with digital aesthetics. For those that are not familiar with your work, could you tell us a bit about your background and when and how did the fascination with the crossover of art and science come about?

Christian Mio Loclair | Waltz Binaire: I started my practice as a dancer and moved like a robot for more than 15 years. The sensations of a human transforming into a machine, even though just in a physical and artistic way, always fascinated me.
Today i concentrate on the opposite. I study the possibilities of machines simulating human behaviours, such as art and consciousness.

I believe the convergence of man and machine, is a contemporary mirror to our society and that its artistic reflection can create new perspectives towards identity. The identity of machines and the identity of humans. Do machines become human because they are able to generate creative output that inspire us? Do we become mechanical as we continuously optimize ourselves?

At STATE Studio in Berlin you are presenting the installation Narciss; Could you tell us for our audience more details about the project and how did you come up with the idea. What is the intellectual process behind it?

Christian Mio Loclair | Waltz Binaire: The project Narciss is very important to us and we are very happy that it found such a beautiful home at State. It is a physical installation consisting of a computer standing in front of a mirror, using artificial intelligence to study what it is looking at it. A machine investigating and describing nothing – but itself.

A screen mounted to the back of the installation offers us insights in what it currently “thinks” it is looking at. We do not necessarily claim that we invented the self-conscious machine with a mirror and an AI. We simply simulated the behaviour that humans use to demonstrate there self-awareness. They speak about themselves.

I do believe to create new narrations on top of new technologies is the task of an artist working with new technologies. Narciss is a dead, synthetic object that in fact speaks verbalized guesses about its own appearance. No generation before us has ever witnessed a non-human entity that is able to perform this task.

What were the biggest challenges you faced in its development?

Christian Mio Loclair | Waltz Binaire: The biggest challenge of Narciss was to discuss its physical language, since its case is so monstrous. The sensational ability of humans to think about themselves is about 50-100 thousand years old. It is the origin of art and philosophy. Without reflecting about ourselves we could hardly communicate, express or define our relationship to society.
Therefore the core of Narciss is a way to colossal for an art piece and can be only treated as restrained as possible.
The corresponding visual language needs to be as minimal and functional as possible. We can not decorate, design and humanise a machine and then ask it to investigate what it thinks about itself. It would only speak about our design. The machine that is able to investigate itself does not have a face. It is a naked motherboard with a camera in front of a mirror – and that’s just honest.

What are your aims as a media artist working between technology and art and how do you see taking your work into?

Christian Mio Loclair | Waltz Binaire: Working with generative algorithms and artificial intelligence I often encounter things that I cannot believe. They feel forbidden. I see software agents moving as organic as birds, Black boxes of Neural Networks generating aesthetic surprises and machines that speak about themselves.
I feel that the echo of those revelations is with me wherever I go. They are not about machines – as they become a microscope into nature. It changes the way I perceive my environment, human intelligence and human interactions. It is beautiful to me and I want to continue to create artefacts and space to share those perspectives.

Christian Mio Loclair | Waltz Binaire: I do believe that creative desperation does not exist. There is just desperation. The resulting symptoms might affect the quality of our thoughts. I think its cure can be found very often in other humans, not necessarily in work, art and machines.