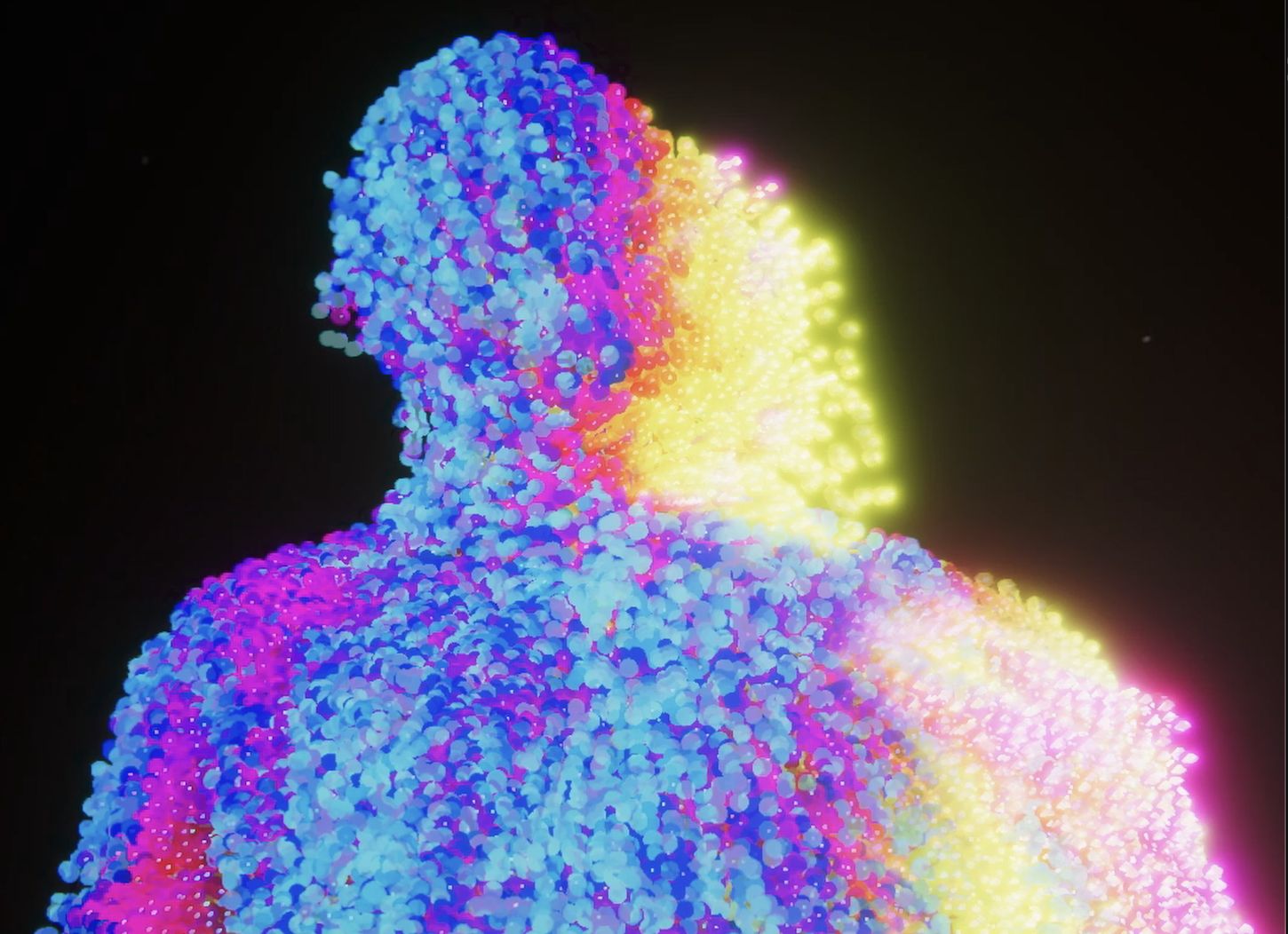 Chris Speed (CVS), a Goldsmiths Computational Arts program student, began his career solely as a digital artist. But his passion for music, rooted in teens spent at dubstep parties in London, only grew more robust over the years. So, he eventually started DJing and producing himself under the moniker CSV. And today, the artist’s track record includes releases on labels such as Off Me Nut, Cherche Encore, Human Error and The Games We Play, as well as gigs at iconic venues across the UK.

Chris’s music draws on different influences like dubstep, jungle, grime, and UK garage. And, of course, Wave plays a special role in his work. The subgenre originated in online communities of the early 2010s and is a perfect reflection of a generation whose worldview and cultural code were shaped on the vast expanses of the World Wide Web. Shortly before the pandemic struck the world, Wave had gradually begun to transition from URL to IRL. It has intrigued dance floors by shifting the focus from rhythmic structures and aggressive beats to emotional and dreamy soundscapes, which is not so usual for today’s club music. This new dynamic is also felt in CSV’s tracks. Combining intense bass with cinematic, sometimes naive, melodies and mutated vocals, he generates captivating sonic worlds where nostalgia and futurism coexist harmonically.

In his production process, Chris uses both algorithmic composition and hardware synthesizers. According to the artist, he likes to utilize old-school instruments to get a new sound. This approach he professes in visual art too. His ERROR 404 video, selected for the Smack My Glitch Up exhibition at DKUK Salon, is a perfect example of analogue mixing with digital.

Chris’ visual practices have evolved from modernizing vaporwave aesthetics with 3D software to working with interactive technologies such as virtual reality, artificial life systems, and photogrammetry. He got a wide range of projects under his belt, from music videos and commercials to live performances for art and music events.

In one of his installations, titled Mutable, the artist combined the latest VR technology with custom software to connect real-time particle simulations to music and redefine how we perceive our bodies within virtual worlds. An interesting feature of the artwork was that it used both internal (virtual reality) and external space. Thereby, the spectators were deeply incorporated into a sensory experience.

One of the next logical steps in expanding his audiovisual worldbuilding, Chris sees the incorporation of a lore aspect. By the way, he already experimented with weird fiction within the Paraspaces group exhibition. Among other things, the artist focuses on working with communities.

Being a part of the wave movement for almost a decade, Chris understands how important cooperation and creative exchange are in generating and implementing ideas, especially after the global lockdown. Today he collaborates with such platforms as In.Grid (Arebyte Gallery / Goldsmiths Comp Arts), Schemata (Corsica Studios), SODAA and more recently FuturShock (FOLD) and is sure that IRL / URL club spaces can be a modern alternative to the ‘white cube’ gallery model.


Your creative practice reflects an interest in technology and its advancement from the technical perspective and also more profoundly at the conceptual level. How do you incorporate these approaches into your work as an artist and producer?

I try not to fetishize new software or hardware too much, but this can be difficult living in a consumer-based society. Particularly in the music production world with “Synthfluencer” culture, there are always new toys to play with, so I just reuse the same old plugins and decade-old hardware synths. I like the idea of using retro gear but striving for a futurist sound, like how jungle and footwork accelerated dub and ghetto house.

In the visual sense, I am a victim of platform capitalism as much as anyone else experimenting in this field. Despite the seeming fads of virtual reality and machine learning, I still think these are rich areas to explore as a new media artist. I believe this comes from my childhood love of science fiction and how we can use these technologies for storytelling. Though we all need to gain control of these tools early on, if we want to steer the narrative to a collective utopian vision

Your early visual work stems from your involvement in the UK wave scene, contributing to modernizing vaporwave aesthetics with 3D software. Your current visuals are still heavily based on 3D, but how has the evolution from the early stuff to your current aesthetic been?

Back then, I was still learning the ropes, so I had to follow Youtube tutorials and try to emulate my favourite artists. I’m still quite involved in the wave scene; it’s been great to reincorporate all the new skills and knowledge I have developed through years of study.

Since Mutable VR there is also an emphasis on the phenomenological aspect of my practice by individuating posthuman bodies rather than just digital avatars. Sounds cringe, but I now try to look inwards for inspiration rather than to other artists.

Tell us about your work with communities, something you have been putting your interests in recently. Could you tell our audience about some of these projects you have been working on? And what has been (or it’s being) the most exciting part of engaging with these projects for your practice development as well?

During the pandemic, I learned the importance of being involved within positive online communities and how we need to support each other through historically hard times.

Recently I have collaborated with In.Grid (Arebyte Gallery / Goldsmiths Comp Arts), Schemata (Corsica Studios), SODAA and more recently Futur.Shock (FOLD). All of these organisations are at the cutting edge of new curatorial models but with the aim of making these digital art/music events a reality. I was interested in making like-minded friends within these collectives and using IRL / URL club spaces as an alternative to the established white cube models.

For almost a decade, I have been mostly self-sufficient, so after a while, I needed to challenge myself through collaboration. I think it was Björk that said the hardest thing is learning ‘how to communicate with other people.’

What do you think new technologies are currently offering in terms of new ways of engaging and working with community-based work?

There are, of course, pros and cons to social media in terms of community organising. Discord servers, Slack and Miroboards make it easy to build new networks and plan events. Newer platforms such as VR Chat and DAOs (decentralised autonomous organisations) could be an evolution in this regard as the last line of rebellion against companies such as Meta.

I imagine some of these community projects have revolved working around DAOs. From your experience, when do DAOs become most productive for an artist’s practices?

Technically I am a member of the Holly+ DAO, but otherwise, I have only really dabbled in crypto, so I am no expert. However, I do find it endlessly ripe for study! Currently, I am catching up with Furtherfield and Torque Edition’s ground-breaking book Artists Re:Thinking the Blockchain, and I am keen to read their latest offering, Radical Friends.

Despite cryptocurrencies being founded on anarchist and agorist principles during the end of the 2008 financial crisis, it seems now the blockchain can be used to support pretty much any political outlook (for better or worse). These technologies are used as a playtest for real-world socio-political policies, such as Universal Basic Income with the Proof of Humanity system.

I currently see DAOs more as a bookkeeping tool used to automate money exchange and make business decisions. Exciting times we are living in with the genesis of Web 3.0; however, let’s hope we don’t repeat the same mistakes as the dot-com era. For a fascinating look at this, check out the 2009 documentary We Live in Public.

You mention that you have been interested in experimenting with weird fiction; have these been at the musical level only or also in your visuals too? What creative process do you use to push yourself into these territories? And what are the elements that make your compositions (audio or visual) move into the weird?

During the Paraspaces group exhibition at Arebyte, we experimented with weird fiction during the initial ideas phase (CCRU style). This eventually moved to a William Burroughs-esque cut-up technique using the GPT-2 neural network for procedural text generation. Some of these AI collaborations ended up making their way into my songs as lyrics, which is a path I may continue down.

I think incorporating a lore aspect to my audiovisual worldbuilding is the next step, as I already have hidden symbols and motifs that could be pieced together. In general, we could all do with a bit more weirdness in our lives! You see this with conspiracy theories, ghost stories and the occult moving from fringe beliefs to mainstream adoption. It’s important to have a sense of mystery and wonder for the world.

As someone very involved in the UK underground cultural scene, what do you think it’s the most interesting thing that’s brewing up either in London or other parts of the UK?

Funnily enough, I have noticed a resurgence of Electro recently! I’m not sure if it is because of some kind of musical nostalgia, but for me, it just practically mixes well with other genres I play in DJ sets.

The experimental music scene in London is going stronger than ever, with a real sense of community and new acts performing regularly at venues such as IKLECTIK.

Hyperpop is morphing into interesting directions despite SOPHIE’s deeply unfortunate passing. There are also new sounds like the UK Wave and Neo Grime scenes I am involved with. Recently in the studio, I have been exploring what’s sonically possible with UK Drill, so I look forward to releasing those tunes at some point.

And what’s coming next for CSV?

More songs, music videos, musical collaborations, radio mixes and I have two (very different) EPs almost ready to be released. In terms of live shows, I have another AV set at Corsica Studios coming up and a Mutable VR performance at Watermans Arts Centre later this year.

I feel very fortunate to have any shows in these post-pandemic times!

As an introvert, I definitely regain my energy from solitude, but this can turn to loneliness after a while. I have accepted that this comes with the territory of music production and digital art, but there are ways to remedy it. For me, the act of bringing ideas into the world is everything, so I enjoy the time spent working alone. However, inspiration doesn’t come from anywhere, so it’s important to also see the world and socialise with people.

One for the road…What are you unafraid of?

The ability to express myself through art, without it, I would definitely go insane!