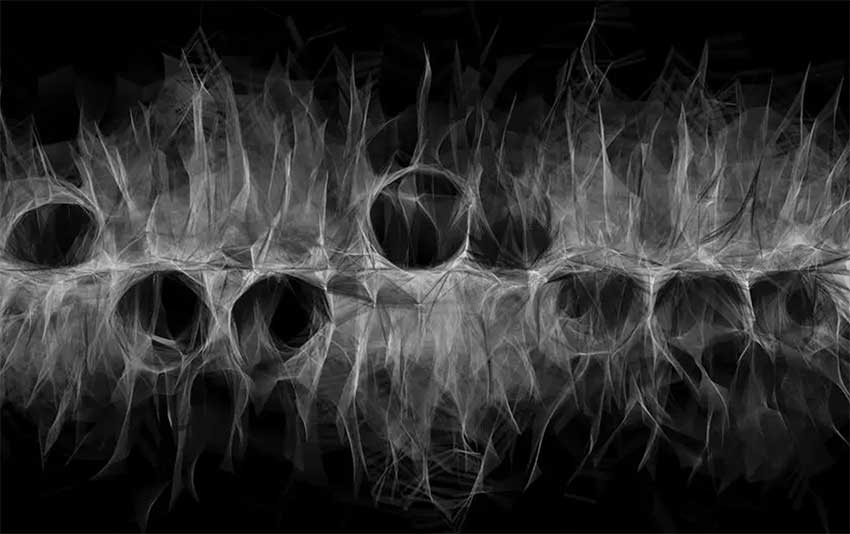 Casey Reas writes software to explore emergent systems and his work spans installation, works on paper, and live performance. From works on paper to urban-scale installations, he often collaborates with architects and musicians and is also a professor at the Department of Design Media Arts at the University of California, Los Angeles. Reas has also worked as a part of the MIT Media Lab’s Aesthetics + Computation Group from 1999–2001, a research group led by Professor John Maeda.

For the exhibition Compressed Cinema, presented at the DAM gallery in Berlin in 2019, all the work has been created using contemporary machine learning algorithms, specifically generative adversarial networks (GANs). In Reas’ words, “the data source for Earthly Delights is a large set of high-resolution scans of natural materials collected in Colorado. More than two-hundred thousand smaller images were created from the scans and this large group of images were used as the training data for the machine learning algorithm, DCGAN.”

For his solo exhibition, There’s no distance at the Bitforms Gallery in 2016, Reas presented works describing the programming process as an aesthetic mode, as if it was a drawing, erasing, redrawing, and reshaping lines intuitively. Back in time in  2001, Reas and Ben Fry initiated Processing, an open-source programming language and environment for the visual arts. They later started the Processing Foundation along with Daniel Shiffman. “Processing is used in many different contexts and by widely different audiences. We focus on access. Instead of “open source,” we emphasize F/L/OSS for Free, Libre, Open-source Software,” Reas told us.

In 2003, Reas published {Software} Structures for the Whitney Museum of American Art’s ArtPort. {Software} Structures was about the topic of instructions in art, from conceptualism to virtual reality, and was a work of software art inspired by the works and research of Sol Lewitt. In 2007 Reas and Fry published Processing: A Programming Handbook for Visual Designers and Artists (MIT Press), an artists and designers’ tool which has gained a reputation internationally. Others highlight form publishing are Form+Code in Design, Art, and Architecture (Princeton Architectural Press, 2010), with Chandler McWilliams and LUST. One idea of Form+Code in Design, Art, and Architecture was “to show how code can cut across fields. Code can be a common language to communicate through different domains,” Reas said. More recently he has published A Mathematical Theory of Communication, RRose Editions (2018).

The Earthly Delights software works in the Compressed Cinema exhibition are direct homages to Brakhage’s film The Garden of Earthly Delights (1981). Cindy Sherman and Stan Brakhage weren’t direct data sources, but I was thinking about Sherman’s Untitled Film Stills photographs as an idea that informed the photographs in the show. Nearly all of the work that I make has specific references to the work of other artists, but I always aspire to create highly original and unique work. The data source for Earthly Delights is a large set of high-resolution scans of natural materials collected in Colorado. More than two-hundred thousand smaller images were created from the scans and this large group of images were used as the training data for the machine learning algorithm, DCGAN.

At the group show Programmed: Rules, Codes, and Choreographies in Art, 1965 – 2018, at the Whitney Museum of American Art, New York, the curator Christiane Paul emphasizes the historical relation between conceptual art and software art. Is this linear chronology makes us think code will replace drawings?

I think it’s nonlinear and back and forth. Machine-like drawings and paintings have been around for decades from Marcel Duchamp’s paintings of machines to El Lissitzky’s Prouns and later the paintings of Agnes Martin. László Moholy-Nagy’s “telephone” pictures are a landmark that leads to Sol Lewitt’s wall drawings that separate the instructions from the creation of the work. Code is unique because it makes kinetic pictures of indefinite duration and responsive (performed) images possible in new ways, but code-based images have plenty of precedent in the past. People will continue to draw. Drawn and coded works are different and one cannot replace the other.

Processing is an open-source programming environment. What has made Processing so successful? Is it the educational purposes and the connection to academic institutions? Alternatively, is it the core of the open-source community spirit?

We’ve been developing Processing for eighteen years now and it’s been successful at different stages for different reasons. Early on, it got a boost from the Aesthetics and Computation Group at the MIT Media Lab, the birthplace of the software. There were early adopters at different schools that led to early growth. Early Processing programs were Java Applets that could be shared easily online and the web fueled awareness. The early supportive and open community focused around the Forum was essential.

The amazing code libraries contributed by the community-made Processing useful for more people. The educational materials including videos and books made it easier for people to teach the basics of coding with Processing. Today, Processing is used in many different contexts and by widely different audiences. We focus on access. Instead of “open source,” we emphasize F/L/OSS for Free, Libre, Open-source Software.

Programming nowadays serves as a mathematical expression, but also as an aesthetic experience. According to media archaeology, maths are the solution to subjectivism. How do you resolve this tension in between media archaeology and classic aesthetics? Do you think media archaeology is too objective and eliminating the narrative capabilities of aesthetics will incur in a world dominated by technological industrialism? Are humanities undermined by the continuous development of science?

The first “computers” were people who did maths, then machines that made calculations, and now they are digital media machines. Learning to code can be learning to think about and to work with media. I’m in favour of studying widely and learning about the arts and sciences simultaneously, but more importantly, to be curious and open to other domains of knowledge. As a culture, we need new arts experiences and progress within the sciences. It’s all about discovery and it’s all essential to who we are.

Form+Code addresses the question of creative coding as a tool for multidisciplinary practice. How users approach code towards broader collaborations in between disciplines? From architecture to sculpture and engineering, how coding facilitates this? Are we finally achieving the total artwork, as devised in Bauhaus design and modern style?

Yes, one idea of that book was to show how code can cut across fields. Code can be a common language to communicate through different domains. For example, as an artist who works with code to create media, I might have more in common (in some ways) with an architect who designs with code than I have in common with a representational painter. There are ways of thinking and shared interests related to code that transcends specific domains. Parameterization, simulation, and visualization are three such areas discussed in Form+Code.

In your opinion, from an artistic perspective, with the advent of AI and the popping news of AI robot artists almost every month, which is the challenge of AI and the relation in working with humans?

It’s not possible to talk about AI in general. It’s a wide expanse of ideas and fields; it’s difficult to know what anyone means when they mention AI. There’s Artificial Intelligence (AI), Artificial Life (A-Life), Machine Learning (ML), Machine Intelligence (MI), Neural Networks (Neural Nets), and Genetic Algorithms (GAs) to name just a few possibilities. From my point of view, there’s no such thing as a “robot artist,” and artists are responsible for the tools and systems they develop. Also, this is nothing new—artists have been working with AI since the 1970s, if not a bit earlier. Maybe the greatest challenge is literacy, which means educating journalists, curators, other artists, and the public. The same surface-level discussions come back around every few years and it hasn’t been possible to go deeper.

According to your experience as an artist and coder, how are corporations such as Google shaping the society we want? Where do you position open-source movement in this context of privatisation and neoliberalism?

It’s certainly a tension. I’ll again point out F/L/OSS as my aspiration. In my view, the term “open-source” was created as a corporate-friendly term that watered down the potential of the Free Software movement.
More and more, even F/L/OSS software is controlled by corporate interests. At the same time, Google is specifically supporting many F/L/OSS projects each summer through the Summer of Code program.
This is amazing outreach that supports many young people financially to contribute to F/L/OSS projects.
It’s difficult and expensive to make Free Software, but I think it’s more worthwhile than relying exclusively on proprietary code. I’ve written two essays on the topic, Thoughts on Software for the Visual Arts and Processing and FLOSS, and Richard Stallman’s Why Open Source misses the point of Free Software is a good overview.

That’s not one of my main problems…

Other humans? Outside of the essentials… music.


Website http://reas.com/
(Images and videos courtesy of the artist)