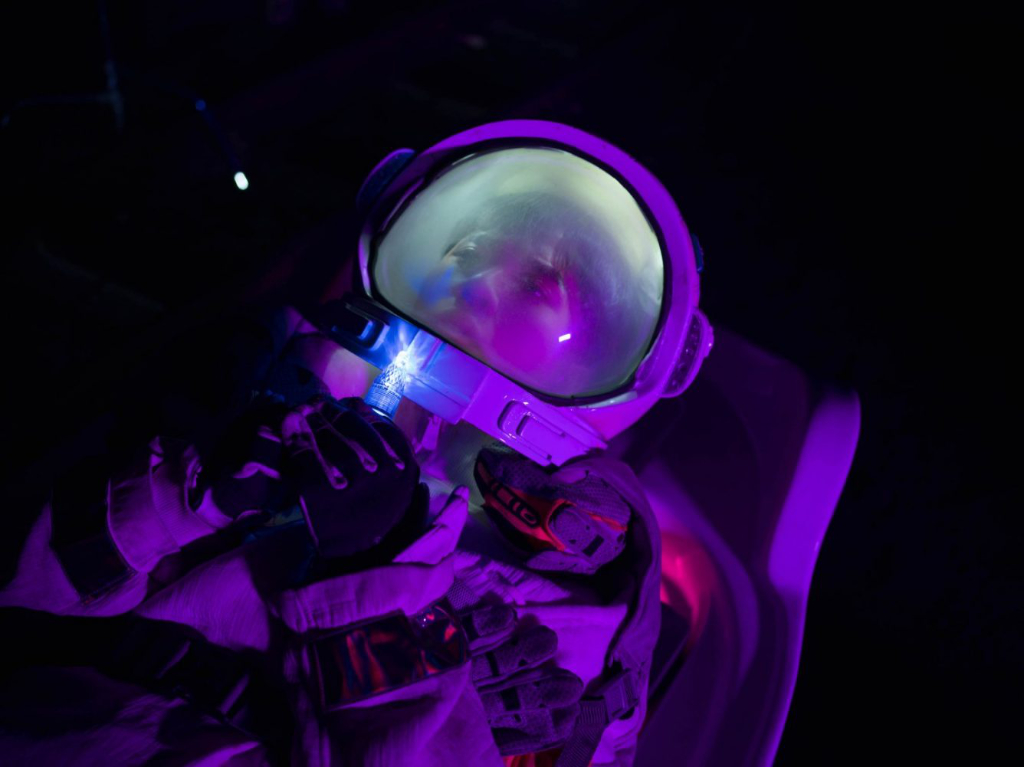 Multimedia artist Cao Fei arrives at our Zoom interview in a rush, explaining she’s just come back from one of her exhibitions. The lockdown hasn’t disturbed the Beijing artists’ prolific force and hectic schedule;  the ongoing show at  NYUAD Art Gallery and the two forthcoming retrospectives at the UCCA in Beijing and the MAXXI Rome have kept her bustling during the past months.

While we have been clinging during these times to virtual realities to feel less isolated, clutching our phone and computer screens to earn our daily dose of endorphins, the global shutdown has pushed Cao to delve deeper into the abstractions of the digital domain. Her dark humor and surreal explorations of our physical confinements are on show at the online exhibition at NYUAD Art Gallery, and From the Instagram of Cao Fei‘ encapsulates the whims of our lockdown status, enhanced by artificial sunsets, tv polishing, and anti-bacterial gloves.

The work is a spin-off from Isle of Instability, unveiled at West Bund Art and Design in Shanghai the past November: a project conceived within the four walls of Cao’s apartment in Singapore, where the artist inspected the social limitations in the act during the 2020 pandemic closedown.

Using imagination as a compass to a reality we can’t physically grasp, Cao plunged into an anthropological journey, building an island in the middle of their living room for her nine-year-old daughter, forging an infrastructure that needs no break down of barriers, forcing us to reflect on the impact of the pandemic and the power of our spirit and imagination.

Her practice has evolved during the years through questioning the role of our individuality within historical transformation, moving across the exploration of our society, history, and temporality through a sequence of multimedia corollaries.

Spanning VR, AR, anime, video, and sci-fi, and exploring the nuances that define human and digital, Cao Fei bridges a gap between dichotomies that intertwine virtual and real, love and alienation, desperation and hope. Nova (2019), her feature-length sci-fi epic film, dives into a  disorienting temporality populated by digital ghosts through a space journey and a love story that traverses multiple eras.


Odyssey of Li Nova is an augmented reality experience played by Cao Fei’s son, transformed into a 3D model that can be downloaded and observed. At the same time, he drinks soda and plays with his virtual self, surrounded by Tai Chi practitioners and flying turtles, inviting us to a new dimension where reality and virtuality are incorporated into a new existence. The perpetual isolation of Li Nova, the child, stuck into the past, acquires more depth now that our social life is distorted and we have been physically isolated.

Cao Fei’s explorations of virtual beings have been pioneering since the early stages of her career, through immersive digital works such as RMB City (2007), created and executed in the online 3D world of Second Life, and more recent works such as the virtual reality experience The Eternal Wave (2020), produced by Acute Art.

Her first major Chinese solo show, opening next March at UCCA, will highlight the peaks of the artist’s twenty-year career, a journey into its evolution that will venture across its origins, spanning on works such as Imbalance 257, Cosplayers (2004), and Whose Utopia (2006).

How did your artistic career develop, from Imbalance 257 to Nova?

It’s a big question- so let me keep it simple. “Imbalance 257” was my first piece from 1999; I used a huge digital camera at that moment. It was a new medium for video artists to use as a digital artform: a Chinese first-generation digital camera in China for video art. I hadn’t graduated yet at the time; I had just started my career with that piece. Since then, I have tried many different mediums, like second life, virtual reality, real performance, state performance, and anime, but I have mostly focused on video, moving images, and some gaming.

From there, I arrived at “Nova,” which has developed into what’s more like a professional kind of film production. Since 2007  I have observed virtual reality development; since then, I have tried to use both AR and VR. I have always used different mediums, depending on the project and its concept. I have never only been focused on one specific medium.

In From the Instagram of Cao Fei, one of the works presented at NYUAD Art Gallery, the lockdown situation is darkly humorous – the character is wearing gloves, perceiving a nature that is now distant from her, while she is losing contact with her house plants. Has she reached the stage where tech is more vital to her than nature?

Ah, that woman is my daughter. We were in Singapore during the pandemic. We spent ten months there: most of the time, we stayed at the apartment. I got a project commissioned by Audemars Piguet Contemporary to do some work related to my condition during that period. So I started talking with my daughter to create something at home, a home show.

Every day I filmed in the living room, where I built a small island, and also we had a tv through which we screened different types of natures with the performance. The sunset in ‘From the Instagram of Cao Fei’ is one of the sunsets that I put on Instagram to record our daylight during the lockdown. I let my daughter clean the small island I built in the living room, and at the same time, she is cleaning the TV.

At that moment, it felt quite emotional and a bit sad because the island is meaningful, but there is also another island on the screen. The screen shows a sunset, an artificial one, while we are distant from real nature – it’s hard to get something like that. Now lockdown has become more regular. People like to spend more time on computers and the internet, getting entertainment from technology; we are even doing sport at home, following Youtube channels, etc.

This is far from nature, the city, and other people – it’s far from human. If these conditions go on longer, we will become much more distanced and disrupt the real world’s feelings. For example, I spend much more time facing the screen into a digital world, but when I get to nature, sometimes I don’t feel the air, the weather, the light. You feel like they are not necessary anymore. You lose the real world’s sensibility after spending too much time online, which means you lost a lot of attention to the real world.

Talking about what’s real and unreal, In Odyssey Of Li Nova, one of the works presented at NYUAD Art Gallery, your son is playing a virtual representation of himself. At the same time, we watch him. We fail to distinguish between what’s real and virtual. How do you describe the idea of what’s authentic and illusory in his life?

It’s complicated. My son is a real actor and performed Li Nova in the film “Nova”: there, he is looking for his father, and for his own life, because his father put him on the computer for 40 years. In “Odyssey of Li Nova,” we made him into an augmented reality version of himself, transferring his figure into digital.

Everyone can now download him from any corner of the world. Because in Nova, he is a nomad in the digital world, he’s been all over the world as a digital avatar now, so we can see him with the app and present himself everywhere to everyone parallel of Nova film. While we always keep asking what is real, what is fake, what is virtual, this is very hard to separate.

In the world we are facing, this is all mixed. Our idea of reality is what makes fiction, story, drama, digital life. What do we have, which is “real”? You or your Instagram? On social media, I can see you with the right light, looking fit, but when I meet you in real life, you are probably another person, so I think this is not the only question for us nowadays.

I believe that the problem is how to bridge this gap realistically. We can do something interesting, crossing over from these different paths and making these borders broader, playing with these two sides instead of just separating them.

NOVA is a collection of videos, photographs, and archive materials – how important is the memory to the characters in your works, whose ability to travel through time and space changes its use?

As a human, the child’s body can’t get time travel in NOVA, but he can travel as a spirit instead.  He is a real actor, a real body. He has met his father in different times (as a young father and young kid); he is like a spirit, having information about the present, past, and future: he has information like a ghost body.

The project is filled with memory, a presented group of memories: as the research of the background of Nova, the film is also about the group memory of the Chinese, since New China in 1949, it’s a reference to it. You can see the buildings, the costumes, the appliances, the furniture: all of this represents old china, old memories.

It is a very mixed memory, but it is kind of stuck in the past because it mixes with time travel and sci-fi and as it’s the concept of the movie – to move from an old China to a future one.

In all of your works – and Blueprints and Nova in particular – we see the interaction of opposites – alienation and love, building and demolition?

The title of my upcoming show at the UCCA Center For Contemporary Art is “Staging The Era,” and it will be a great example of it because when you are talking about the conflicts, you are right, I always like to fill in these two sides. Staging the era is my way to present all these elements’ worldview; I like to take objective views to see the world, so my works include all these conflicting elements.

The last exhibition at NYUAD Art Gallery is conceived to be reproduced on a phone screen – how do you see your art changing in the next few years?

I have more and more projects being transferred online, and for museums and institutions, the digital platform has become more and more important for artists. There are many invitations to online shows and online views: you can smell the way changing, but I think the real live exhibition is important.

You get to the museum to see the show, the artworks, and it’s so different because you can immerse in the exhibition site to locate the artwork and decide if you want to be with the audience or without the audience. On the internet, you have so many selections you can choose from, and you can even have more open selections at the same time, or you can speed up the video.

So I think that the traditional side has different ways that force you to consider: I don’t want to only have online exhibitions for the rest of my life, I hope we can find a balance,  and when we get to normal, we can be online and offline and work on both.

What is the chief enemy of creativity?

Losing curiosity is the enemy of creativity. When you lose that, you do not question anymore. You lose a lot of sensibility to the world, to people, to emotion between people. And that’s sad. For me, curiosity is the key point.

I don’t know. I can’t answer. Everything is so important.

Website http://www.caofei.com/
(Pictures courtesy of the artist and NYUAD)