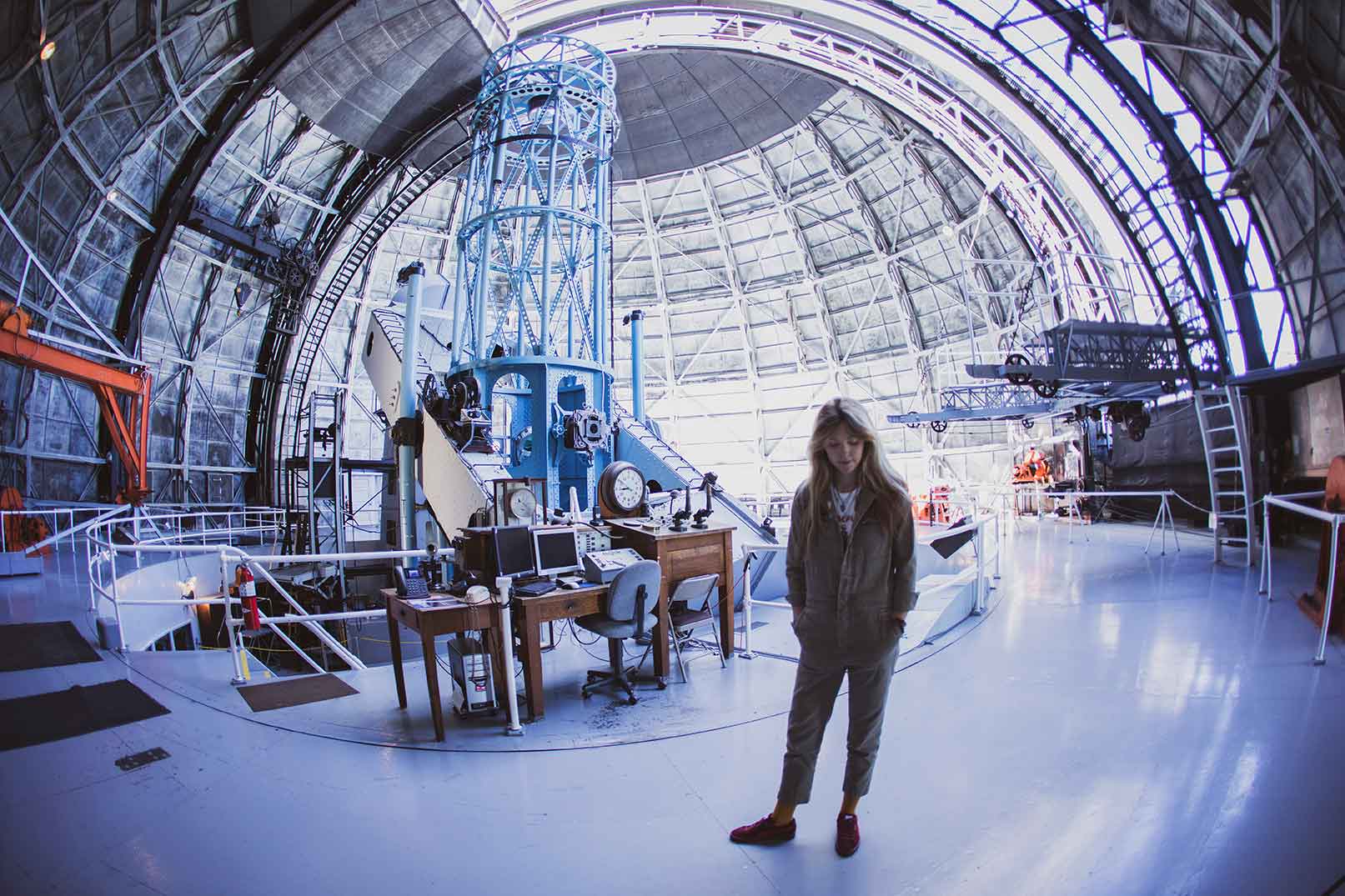 Many contemporary artists have a hand in a range of disciplines which broadens their remit beyond their core set of influences and intentions, and for musicians, the performance space has responded by sprouting parallel environments for work to exist. The gallery is just as viable as the concert hall and for some might have even supplanted it in the investigation and encouragement of new artistic processes, and the presentation of their results.

With the social and conceptual entropy that is melting previously solid categories, artists are experimenting with new forms, traversing contrasts and collaborative strategies. In past decades such curiosity was often confined to a smaller assemblage of intrepid individuals and institutions.

Linking these worlds is Beatie Wolfe, a singer-songwriter originally, but one who early on in her career sought expansion beyond her immediate world, recently resulting in a solo exhibition of her album designs at the Victoria & Albert Museum and a new documentary on her work commissioned by the Barbican, titled Orange Juice for the Ears* (dir. by Ross Harris). The London based Anglo-American was among the first artists to produce a release in the form of a phone app with 2010’s Burst EP. Interestingly, the launch event could not have been any more conflicting, bravely hanging onto historic musical tradition by taking place in a church.

Her subsequent innovations have seen her become a collaborator and point of interest for a wealth of tech-based companies and institutions. Surrounding the release of her debut album 8ight she found herself working with Apple on a series of events where album tracks were played alongside a presentation of her app.

More recently she has utilised 360˚ VR technology to create a fully immersive experience of her Raw Space album, an ambitious vision realised in liaison with interactive creative team Design I/O and Nokia’s Bell Labs. The latter linkup renews the activities of Experiments in Art and Technology, a project initiated in the late 60s to pursue creative connections between artists and engineers. The figures involved in E.A.T. were responsible for many creative technological developments that the art world had never witnessed before, such as video projection and wireless sound transmission. It stands as an influential entity in numerous areas of sound and art including noise music, experimental visual art and performative concepts rooted in the Dada and Fluxus movements.

Through working with Wolfe, E.A.T. has in some sense revived itself in a landscape where its influence never left.

(*) Orange Juice for the Ears: From Space Beams to Anti-Streams is part of the Barbican’s 2019 season, Life Rewired, which explores what it means to be human when technology is changing everything.

In your view how has E.A.T. influenced experimental music and sound art since its inception?

It created an umbrella under which experiments in sound, art, tech all came together and could co-exist in a nuanced yet expansive fashion. This helped to open up the field to broader, more interdisciplinary thinking.

In what ways can the types of investigations carried out at E.A.T. be associated with the political, social and technological situation of the late 1960s?

In the way of pushing things forward and being a forum for new ideas and ways of thinking. It was a time of true collective action and cultural upheaval with seismic shifts in music, politics, fashion, design, technology. The crossovers between politics and culture, and how those combined, created an era so enduring in the public psyche and I feel that it’s a really important time to remember that change can occur when different yet complementary forces unite, and when collective action and cultural upheaval come together.

E.A.T. championed closer and more intimate working relationships between artists and engineers. Do you see this as an important working method to keep alive in today’s age of geographical separation made possible through remote communication and collaboration tools?

Yes, virtual networks and remote communication tools provide great ways of starting unlikely or geographically challenging collaborations, but I think nothing beats being (physically) in the same room together. I really think that’s vital for key points and parts of the collaboration.

Could you introduce your work and influences? Would you cite E.A.T. and the work stemming from its existence as influential in your own work?

I am an artist/innovator and I create new formats for albums (and new ways of seeing music) that bridge the physical and digital and remind people of the magic of music, as both an art form and deeper experience, in this era of the intangible. I am influenced by people who are pushing things forward and people who contribute to this planet in some way. People who are thinking about the “long now”.

Jim Henson, Oliver Sacks, William Blake, Hafiz, Greta Thunberg, David Bowie, Nikola Tesla, Dr Sylvia Earle, Elliott Smith are just a few of my heroes. Those who began EAT were definitely working in the vein that I love; mixing media/fields, combining art, science and technology, and making people think differently and deeper about forms and ideas they thought they knew so well. Taking William Blake’s line as inspiration: “What is now proved was once only imagined,” I love those who imagine what can be, instead of work only with what is.

How has your work developed in alignment with advancements in technology?

My work is about exploring how technology can be used to recapture storytelling, ceremony and tangibility for music (and art in the broader sense) in the digital age. Bridging the physical and digital and reimagining the vinyl experience in retro-future ways, these ‘world first’ designs (recently exhibited in a solo exhibition at the V&A Museum) range from a theatre in the palm of your hand, an album as a deck of cards and wearable record “jacket”, an ‘anti-stream’ from the quietest room on earth and a Space beam from the Big Bang Horn.

In terms of where this comes from, I have been thinking about the worlds I could create for my albums since I was 8. I would spend hours immersed in my parents’ record collection. I saw records as musical books that I could open up and read like a story and through this physical gateway be transported into the world of the album. So I have used technology (perhaps contradictorily) to re-present a more tangible, ceremonial and deeper listening experience (the kind that imprinted on me as a kid) but in a way that also facilitates a sense of curiosity and makes people feel like they’re seeing music in a new light.

Technology, in my case, is just the magic dust that transforms a phone into an 80s viewfinder, an album cover into a musical jacket, a physical record stream into a Fantasia experience. It’s not about the technology but what it facilitates, for example, making the new feel nostalgic, and the familiar feel magical. And it’s also about being as inclusive as possible, so that everyone from a child to a grandparent intuitively knows how to interact with it.

Also unlike the record industry it was never about coming up with one definitive format that could be sold or replicated with the intention of making money. It was always about the exploration and pushing the boundaries and having people see music in ways that captured their imaginations and reminded them of how an album is an art form (even today!) and one that I believe will never go out of fashion.

Can you enlighten us to your involvement in the celebrations of E.A.T.’s 50th anniversary?

For my latest record Raw Space I created an ‘anti-stream’ in collaboration with Bell Labs and Design I/O and this was celebrated for rebooting E.A.T. 50 years on. The E.A.T. program had attenuated over the decades, but after sharing my vision for Raw Space with Marcus Weldon (president of Bell Labs) this project kick-started E.A.T. for its next 50 years, which was both wonderful and cosmic for a number of reasons. The Raw Space ‘anti-stream’ was the world’s first live 360 AR experience, which combined live 360 stereoscopic video of my physical record stream from the quietest room on earth with real-time dynamic AR animations.

The effect was a Fantasia-like live-streamed album, which ran continuously for a week with artwork that evolved every time the record spun. It was an honour to follow in the footsteps of Warhol, Cage and Rauschenberg with Raw Space, especially as it was part art installation, part sound experience and a technological first on a number of levels.

It also led to Nobel Laureate Robert Wilson and me broadcasting Raw Space into Space via the Horn Antenna (used to prove the Big Bang theory) and this ended up serendipitously connecting me to Project Echo (the first phone call bounced via Space); my Grandfather and his work on the first series of U.S. Satellites (which I only discovered after giving a talk at JPL); and to Warhol who had asked Bell Labs to build him a series of Mylar balloons inspired by Project Echo. A much longer story but one of the most amazing examples of how everything is connected.

Money can be, complacency definitely is, and I would also say tools for tool’s sake. I really find that you are your most creative when you’re out of your comfort zone, your senses are sharp and that often comes from being limited in some way whether that’s budget, access, or in the execution of your output. I always imagine it like a blank piece of paper. You have to start with a raw space and know exactly what to pull in and why. If you have all the money or all the options to begin with, it’s very hard to start with that same raw space.

Clean air, water, food… it sounds obvious but I think that in this current reality that is not something we should be taking for granted anymore. I’m working on a new environmental protest piece (“From Green to Red”) that explores human impact on the planet, built using 800,000 years of historic data.