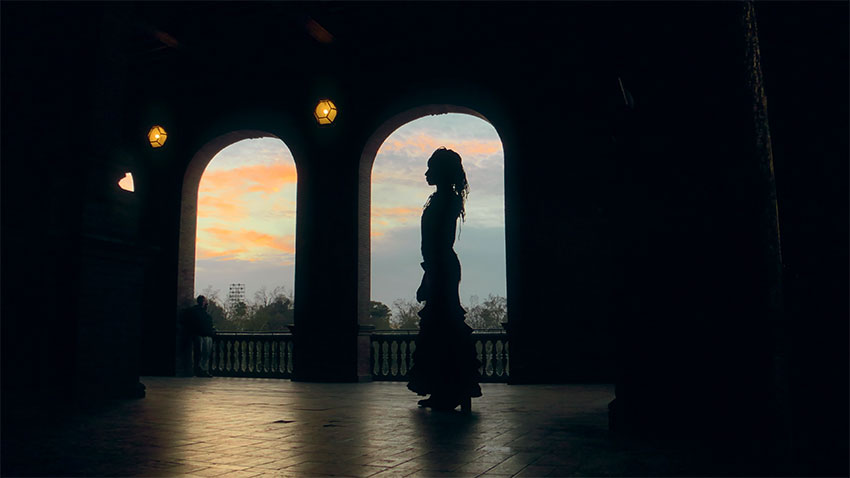 Further proof that the current arts zeitgeist is dominated by the acronyms XR and VR, this year’s London Film Festival features LFF Expanded*, a new programme of immersive film and art installations. One of the featured directors is Baff Akoto. His work is generally focused on the fluidity of visual grammar and characters who grapple with notions of identity and (self) perception. Mentored by artist John Akomfrah and filmmaker Asif Kapadia, he’s been directing tv dramas, shorts and films since the early 2010s. Recently, Akoto has been exploring the narrative potential of immersive/virtual reality technologies and he’s presenting a few works during LFF 2020.

One of the featured works that caught our attention was Leave the Edges. This 39-minute single-channel artist moving image piece presented in LFF Experimenta is billed as an exploration of African diasporic consciousness and cultural expression, and as creating a dialogue between post-colonial African spirituality and artistic practices from West Africa to the Caribbean and Europe. In previous interviews, Akoto has talked about how the philosophy of Martiniquan scholar Édouard Glissant played a role in creating an intellectual and theoretical basis for this atmospheric piece.

As well as Leave the Edges, 2020’s LFF Expanded programme also features Virtual (Black) Reality, a project concocted by Akoto in 2018. Depicting Afropean experiences, this series of 180° films follow four individuals (Bella, Babs, Kwesi and ShaNon), who while very different are unified by their origins and cultural backgrounds.

Akoto’s interest in transnational experiences and post- and neocolonial identities stems from his own experiences as a Ghanaian British man, and also from his time spent in Madrid and Kampala. His previous feature-length work, Football Fables (2010), followed young Ghanaian footballer Francis Boadi as he headed to the UK for a series of trials with Premier League football teams.

We discussed with Akoto about the challenges and the possibilities of transitioning from cinema to virtual reality, and about how Leave the Edges mixes filmic poetry and documentary to produce a “fusion”. Such a result is perhaps not surprising given that, as mentioned before, Akoto has been mentored by legendary artist and montage filmmaker John Akomfrah, himself not shy of playing with form and genre. The artist also discusses the potential to draw the universal out the specific, and the influence of cinematic photography on his visual style.

* This year’s inaugural Expanded programme has been curated by performing arts and theatre maestro Ulrich Schrauth and is the first time that the LFF has presented work that goes beyond the scope of the traditional cinema screen. Limitations on socialising have been considered, and home viewers can access this part of the festival through its virtual museum and event space, The Expanse, which can be experienced either with affordable technology such as Google Cardboard or high-end headsets.

What drew you to virtual reality? What couldn’t you do in the traditional film format that you wanted to explore with these projects?

Virtual reality was shiny, new and promised much – from afar. So I was curious. At the Berlinale Talents incubator in 2016, I sat-in on a VR filmmaking seminar which intrigued me. It felt like lesson one in learning a completely new language. A little disorienting but the potential to immerse an audience within a world to a whole new sensory level was the thing that sold it to me. Immersion is the thing we spend our lives chasing in making (a certain kind of) cinema.

What were the challenges of filming the footage for virtual reality? How crucial was the post-production process?

The main challenge was the physics of the visual language. Certain ways of thinking about and moving the camera are different from regular film. So training ourselves to adhere to this, and messing it up frequently, became part of our process.

Post-production was handled by my long-time collaborator Jonathan Cronin who is an incredible editor and filmmaker. He has a solid technical grounding and was able to incorporate the quirks and requirements of VR into our post workflow. The VR veteran on our team was the sound designer Anna Bertmark. She’s been working with us for nearly 10 years on various films but started working on other VR projects a couple of years before VIRTUAL (BLACK) REALITY so was really able to guide us through our spatial sound design.

Is there any already existing virtual reality work that has inspired you, or have you enjoyed exploring this new territory without outside influence?

There’s always outside influence – even if latent or unconscious. But I reckon most – if not all – of mine come from outside the VR world. From cinema, photography, art and academia.

Are you trying to create specific feelings in a viewer who is not personally part of the African diaspora? On the other hand, what purposes do you think this work serves for people who are part of it?

Not particularly. This work is quietly, radically attempting to make sure that in the rapidly evolving digital age includes our stories – and our storytellers. As with most mediums from the novel to the theatre to art-house cinema, specific protagonists and storytellers can be universal and compelling. I expect the same is true of VR.

Focusing on the use of space in virtual reality: a VR experience is not linear, and it must be hard to predict how someone experiencing a VR work is going to “move” in the virtual space. Were you thinking of this before you began the work, did it affect the design at all?

It was a factor yes. But less so as we used the VR180 format, which makes it easier to control a “frame” in the traditional film sense. A bigger factor was how we chose to move and frame the camera. More so than if we’d been using a 360 rig or rendering a virtual production with an engine.

The role of space (the illusion of physical space) in virtual reality seems particular to it – this is a realm of experience that many other artforms often don’t play with. What are your thoughts on the role and experience of space in this format?

Spatial design – both visually and sonically – becomes a larger consideration when making a VR experience. Coming from cinema, where spatial concerns are limited to just the flat frame, the increased utility of space as a creative tool to better engineer experience is really exciting.

Are there previously existing art forms that can be instructive? In your entry to this year’s BFI film festival, there seems to be two levels of space, as you utilise the virtual space to depict spaces in the actual world, but in ways only possible through technology such as virtual reality.

Cinema is my foundational art form. But it’s a big tent incorporating numerous visual arts simultaneously. So in my pursuit of cinema photography (Barnor, Sidibe, Fosso, Salgado, Gursky) and certain painters (Dani Yohannes, Sola Olulode, Emily Moore) are a huge influence on me. These are art forms which, to varying extents, are concerned with the rendition of (narrative and visual) space. Embracing VR in my artistic practice is an extension of this.

What’s been your most surprising experience when wearing a headset?

The enjoyment of stillness. Especially when the sound design is interesting

Do you consider Leave the Edges as documentary, poetry, or some fusion of genre? How do you feel it relates to the wider BFI festival programme including your own series Virtual (Black) Reality?

It’s a snapshot of my journey as an artist – at the time I was making it. “Fusion” seems like an apt word. My practice at the moment is interested in multiple forms of making moving image and has been moulded by my foundations as a narrative director and a documentarian. With both my artist moving image and VR works, there is a noticeable overlap in the thematic concerns at play – they definitely relate to each other as companion pieces. How they relate to the wider BFI LFF programme is a question for Festival Director  Tricia Tuttle and her programming team.