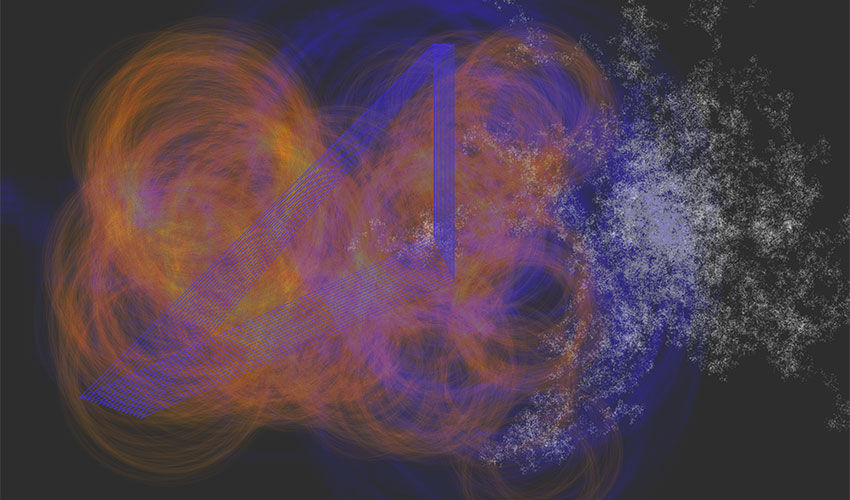 Ankita Anand is an Indian artist with a professional background in experimental moving image. The currently London based creative used to combine documentary film and fiction to create surreal narratives, but has switched focus in the past year into a discipline which seems to be becoming of interest to more and more fellow artists – creative coding and programming.

After studying Illustration and Visual Media at the London College of Communication Anand completed a Master Course in Computational Arts at Goldsmiths University. From then, she has been part of various renowned exhibitions and screenings in the UK and abroad including the London Short Film Festival, Choreographic Coding Lab, The Nunnery Gallery, and Tate Modern.

With her recent work, Anand is exploring crossovers between spirituality and technology. She wishes to make the boundaries between the two more fluid by introducing eastern approaches into the debates regarding AI. Therefore, her projects attempt to link ancient science back to contemporary and future technologies and look into how these approaches can be further developed to accommodate diversity and inclusion.

In her project Presence the artist explores how consciousness and essence could be represented through code. Within her work, she argues that self-awareness is composed of self-evolving cumulative clusters that expand and grow into each other. She visualizes this very abstract concept with a broader visual approach within the art piece by differentiating groups of objects and causing them to interact with/react to the presence of each other within the digital space. To execute this, Anand resorted to object-oriented programming as it allows her to control and monitor the different objects and their properties.

As the advances in AI are progressing at such fast speed and more tasks are being taken over by digital machinery due to their higher efficiency rate in comparison to common human capabilities, it is understandable that the response from the public seems to be quite negative towards those newly emerging technologies. As a consequence of the arising concern that questions the future role of each individual within our society, an increasing number of people are finding responses to those questions in spiritual philosophies such as yoga and meditation.

The psychic practices view human intelligence in different dimensions and treat the intellect – the dimension that is commonly referred to when comparing digital and human intelligence – as simply one of the many. The artist believes that over the years we have been overusing that one dimension, which explains to her the arising fear of the general public towards technologies that promise the digitalization of our futures.


For our audience that is not familiar with your work and background; could you tell us a bit about your background, interests and inspirations?

​My background as an artist is in experimental moving image, however, in the past year, my focus has moved onto creative coding and programming. Having grown up in India, I am heavily influenced by the country’s rich culture, traditions and vibrancy. In particular, I draw inspiration from my own experiences of practising yoga. Through my work, I am very much interested in exploring places where spirituality and technology might overlap. I wish to make these boundaries more fluid by introducing eastern approaches like yogic philosophy into the debates regarding AI. My projects attempt to link this ancient science back to contemporary and future technologies and how these approaches can be further developed to accommodate diversity and inclusiveness.

In your practice you use AI and ML to produce new imagery, do you see them more as a tool or a creator?

I would see them more as collaborators – AI and ML are very useful tools for experimentation and fast prototyping. However, at the end of the process, it is still me as an artist making choices of data and imagery. Hence it is more of a collaborative process.

Why you think is relevant to produce art with AI, what are the main relevant conversations in your opinion it sparks?

I realise there is an immediate fear relating to AI and how it could take over creativity and human intelligence. However, I feel this fear is because we have a very limited idea of what human intelligence is and what it means to be alive. In the yogic philosophy, human intelligence has 16 different dimensions, the intellect being just one. But over the years we have been overusing that one dimension – hence the fear. Through producing art with AI there is a hope that people realise the immense capability of machines to perform tasks better and faster than us and at the same time realising its limitations.

One of your latest works is ‘Presence’;  What is the intellectual process behind this project?

I would say the ‘intellectual’ process was purely technical and how I made the piece – which is using object-oriented programming. Presence is not always intellectually understood it has a lot to do with sensitivity, experience and consciousness. I started paying attention to almost everything – I noticed how plants, animals and people would be affected by the presence of each other. When we observe life existentially we realise every form of life is already in constant communication – as everything is interdependent – it is just a matter of us being conscious of these moments.

Hence this project is a result of my explorations into how coding (in particular, object-oriented programming) could embody the seemingly abstract idea of presence – I made different clusters of objects and have them interact with or react to the presence of each other to create forms and colours that were unpredictable.

I have a dedicated time every day that I spend alone for my yogic practices. Apart from that I enjoy simply observing life and nature without the filter of my thoughts and mind, which is often difficult to do.