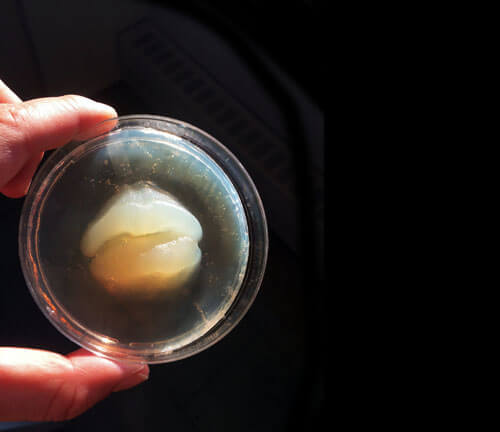 ANI LIU, navigating the divergent connections between art and science

Issues related to women’s reproductive health rights, like birth control and abortion regardless of religion, culture or socioeconomic levels are some of the most issues debated [by men]. Do you remember when US President Donald Trump signed an executive order to cut off all U.S. funding to international NGOs whose work includes abortion while surrounded by seven men? That happened in 2017 and was one of the points behind the intellectual process of Ani Liu’s project Grab them by the *: Mind controlled-spermatozoa. It is an intelligent and critical project that images a (dystopian or utopian?) future in which women using brain-computer interfaces would control the movement of sperm ‘with the agency of their thoughts’. Beyond its irony, Liu’s idea is to make us reflect on how the sociological, cultural and scientific discourses around women reproductive choices are mainly driven by men excluding women in the debate.

Ani Liu is a transdisciplinary artist and speculative technologist. A recent graduate of  MIT Media Lab (Boston, EEUU) Liu runs her own studio. She designs multisensory experiences that, through the use of technology, shed light on what it means to be human. In her words, ‘(…) there are also subtler forces at play, which I find interesting.  How do current technologies normalise cultural notions of surveillance? How will artificial intelligence affect our ethics? How do algorithms shape your beliefs?. In The Botany of Desire, done in collaboration with scientist Noam Prymes, Liu raises questions on interspecies empathy exploring the relationships between humans and nature while exploring the potential of biotechnology.  ‘Where are the thresholds between science and its ability to change our emotional landscape?’, Liu asks. The speculative scenario involves plants, humans, lipsticks and a kiss. In it, a set of plants respond to emotions and grow and bloom when ‘touched by a kiss’.

Liu’s work is a deep dive in the social, emotional, cultural and ethical implications of emerging technologies. Her statement lies in the concept of ‘plastic subjectivity’, there is not a truly objective reality as everything is embedded with our personal experiences. Roland Barthes writes in his book ‘Camera Lucida’ (1981) about two concepts link to reality: studium and punctum. The studium or interpretation [in his case of photography] denotes the cultural, linguistic and political interpretation while the punctum denotes our personal experiences, the myths of our historical moment and the cultural background that make us establish a different relationship with the object [in the photography] or reality.

This shared philosophical linkage is evident in Mind in the Machine, included in the Queens Museum Biennial later this year. In the piece, Liu tells the story of a Chinese factory worker to raise awareness about the emotional consequences of technological advancements: mass production, anonymous labour, automation. Via EEG signals, Liu translates into knitting the brain activity of the worker creating a fabric which is unique as it depends on the mental stress of the factory worker throughout the working day.

You are an artist and speculative technologist working at the intersection of art and science. For those that are not familiar with your work, how and when did the fascination with them come about?

As an artist, I am fascinated by how things work and how systems come together.  I’m often scattered in my thinking, but I find that it leads to interesting paths of learning.  For instance, a few years back I was building an IoT device that had a camera, and I became interested in how image capture sensor worked, which lead me to wonder how the neurons in a brain perceive colour, and then to how a neural net constructs its computer vision.  It was a fairly roundabout journey, but as an artist, I am interested in how piecing these disparate bits of knowledge together reveals deeper meanings on what it means to be human.

Many philosophers and theorists have spoken about this idea in different ways over time- the idea that there isn’t one truly objective “reality.”  The way we perceive our world is deeply affected by many elements of our time- our religion, our culture, our technologies. Today, we often look to science and technology to inform us of objective truths, but it often takes a cultural revolution for discoveries to be accepted.

For instance, when early astronomers first began observing that the movements of the planets revolve around the sun and not the Earth, despite hard evidence, Copernicus was condemned because of the radical way such an observation would challenge the authority of the church.  Much later on in history, we see similar conflicts over the idea of evolution. This is because scientific revolutions don’t just describe new information; as humans, they often alter societal norms and our sense of self.  Technology does this just as radically, but oftentimes more quietly.  We often talk about the ways Facebook altered the way we socialize, or how apps like Tinder shift our notions of intimacy— but there are also subtler forces at play, which I find interesting.  How do current technologies normalize cultural notions of surveillance?  How will artificial intelligence affect our ethics? How do algorithms shape your beliefs?

Emotions and behavioural responses are two central axes of your work (see”The Botany of Desire”) in which you explore the use of science for emotional ends. Could you tell us the intellectual process behind these projects?

To make art has always been to investigate what it means to be human.  It allows us to access other bits of intelligence- emotional, intuitive, subliminal–  that create an important dialogue with those of reason and logic.  Don’t misunderstand me when I say that- I deeply believe in the scientific method— but I think there are many non-linear channels through which reality is gleaned. While science allows us to know and measure the world, art allows us to reflect on how we feel about it.  For me, the two are deeply entangled and co-inform each other.

One of your latest projects is mind-controlled spermatozoa in which through the use of a brain-computer interface, she controls the movement of sperm with the agency of her thoughts. In which ways do you think are interactive and digital technologies changing or affecting human behaviour?

With Grab them by the *, I created a device to control sperm to spark a conversation about the many cultural and scientific discourses that shape the notions the female body Artistically, this piece creates an act of female empowerment, responding to the current political regimes in which women are losing rights related to procreation within her own body.  Investigating the body as a medium of culture, this project raises questions as to how we operate in our politically gendered landscape.

Navigating the divergent connections between art and science, this work challenges the viewer to question what is possible. Whereas our biological understanding of sperm is usually deterministic (i.e., as an inherent homing device racing towards the chemical signatures of an egg) or coloured by gendered cultural constructs (i.e., its semiotic use in pornography) this project seeks to invert all preconceived notions.

By creating a work that is simultaneously technological, functional, and symbolically potent, it seeks to expand our notions of what it is possible, and what is possible to question.    I think many technologies are changing our behaviour profoundly and deeply unknowable ways.  In this piece, I sought to deeply meditate on some of these aspects in relation to gender.

Over the last few years, I have become extremely interested in smell as a sensory conduit of knowledge.  I have made a lot of my own perfumes in the studio and feel excited to continue with those experiments.  Last month, I was lucky enough to go on a zero-gravity flight, and recently finished Elon Musk’s biography, so space exploration has been on my mind a lot too.