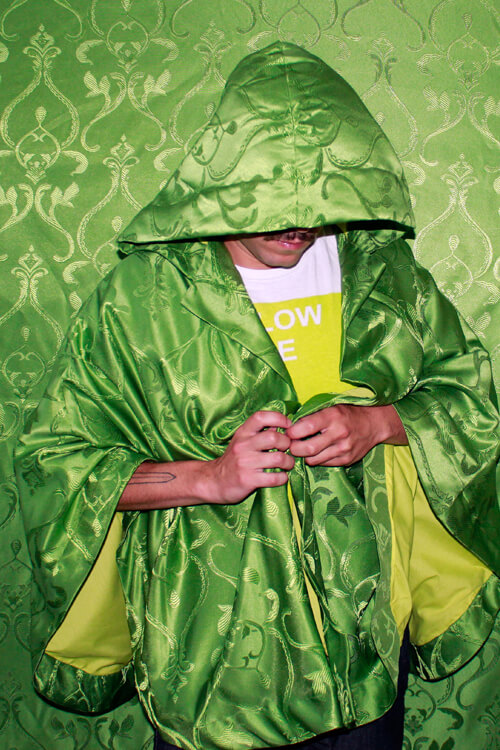 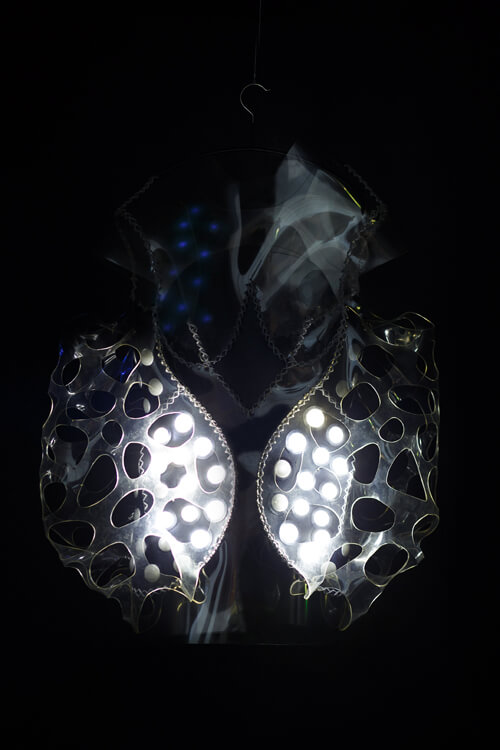 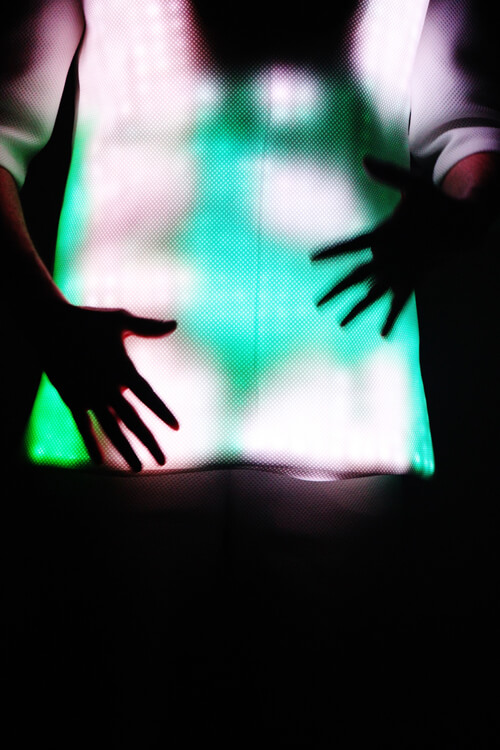 To bring about sensorial experiences through digital interaction: that’s one of the main creative aims of Ricardo O’Nascimento. An artist and researcher in the field of new media and interactive art, he investigates the relationship between the body and environment developing interfaces for worn devices, interactive installations and hybrid environments. Keeping a poetic approach in mind, he wants to make people dream by putting fashion in another level of expression heightened by technological advances.

O’Nascimento is also the founder of POPKALAB – his experimental project – a design studio focused on research and innovation on wearable technology:  “we are specialised on electronic textiles and reactive garments for entertainment and lifestyle” he says. Through this project, he’s been able to do establish thriving collaborations with a number of talented artists and designers and to present his projects all over the world in museums, galleries and art festivals like Ars Electronica, V2 and Transmediale.

Based in Rotterdam, O’Nascimento has a background in political sciences which has given him an inquisitive sight into human and social behaviour  His designs are exuberant, playful, full of life and colour; probably a reflection of Brazilian culture and a love for indigenous aesthetic.

In Batuque – one of his most recent creations and inspired by the Afro-Brazilian faith Candomblé –  the wearer becomes a sort of entity with an extra sense. Its skin senses the surround sound and reacts with movements and vibrations.
Ricardo is also very prolific in collaborative projects, like Be Loved, with Iria do Castelo,  a piece of work that tries to find the boundaries of love and borders of attraction, where being tied to someone becomes and expression of freedom. Other of his creations like Wearable Narratives, Wearable Façade explore different aspects of communication and interaction through clothing apparels either with other human beings or the space around us.

With designs that aim to make us feel and experience new sensations as if they were part of our bodies, Ricardo shines a ray of light in our sometimes not so sunny lives. 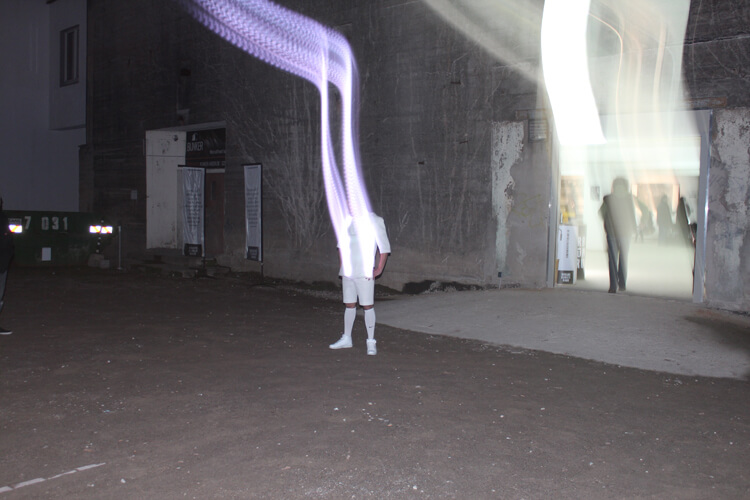 What drew you to working at the intersection of new media, interactive art, wearable devices, interactive installations. Could you tell us a little bit about the intellectual process?

My background is in political sciences. When I was living in Brazil I used to work for an NGOs that, among other things, fight for the rights of indigenous people. While working there, I realised that my heart is in their aesthetic and art. I understood that art could be a powerful tool to convey a message and perhaps more efficient than writing papers. I am a musician myself, and I always was interested in synthesisers and electronic devices. I guess that is why I got interested in interactive art. For me, the magic happens when you can participate in the artwork. My pieces are open and depending on the way you interact it will behave in a particular way. This proximity with the visitor is crucial to me.

When you make an interactive piece,  you must think about the user and how he/she could behave when confronted with the artwork. This thought puts the body in a very prominent place. Without the body, there is no interaction. Wearable devices came naturally. Since I was a kid, I am very interested in fashion as a self-expression tool. With technology, you can add a new level to it. Today, with the use of electronics and smart components such as microprocessors, sensors and actuators, clothes have become intelligent. They start to respond to their environment and establish communication at many different levels. The possibilities that new type of technology bring is immense and very appealing to me.

I hope the festival shows to the big public that wearable technology can be much more than gadgets that we are used to seeing on magazines. I believe it can present more artistic performances related to wearable technology. I want to see works that are not necessarily trying to hit the market and raise millions, but instead, works that are compromised with artistic values and subjectivity.

Wearable technologies have the ability to communicate with their owners and by doing so, the boundaries between physical and digital are blurring. How people respond to multiple stimuli in a digital environment beyond the touch of a screen or button is one of the questions to answer in this 21st century in which people live in a hyper-connected society. In which ways do you think are interactive and digital technologies changing or affecting human behaviour?

It is fascinating how we are delegating part of our lives to electronic devices. The smartphone, for instance, is now an essential apparatus and people get nervous when it is not around. Indeed, wearable technology can provide an even more immersive digital experience to the user. When you do not need anymore to look at the screen to interact with the information, you potentially become more efficient and maybe more stressed. The over information that we are exposed tends now to hit other senses than vision. For instance, with the use of haptic feedback the wearer can feel the information on the skin. Fortunately, our brain is smart enough to adapt itself to this new stimulus. I believe wearable technology will play a significant role in the next years by freeing people from the square of the screen and proposing new forms of interaction.

The biggest challenge for me it is still the connection between soft and hard parts. The fact that the body moves a lot and sometimes in a non-predictable way stress the electronic circuit, and it ends up breaking. The challenge is how to fully integrate the technology and not only create pockets to host the electronics. Another struggle is the fact that I am an independent artist. Not having an institution behind me sometimes can be a problem. Although I see myself as an artist, I am aware of the commercial possibilities brought by wearable technology and from my experience big companies rarely contact an independent artist to collaborate with their R & D team.

That is a hard question. I think I could not live without dreaming.