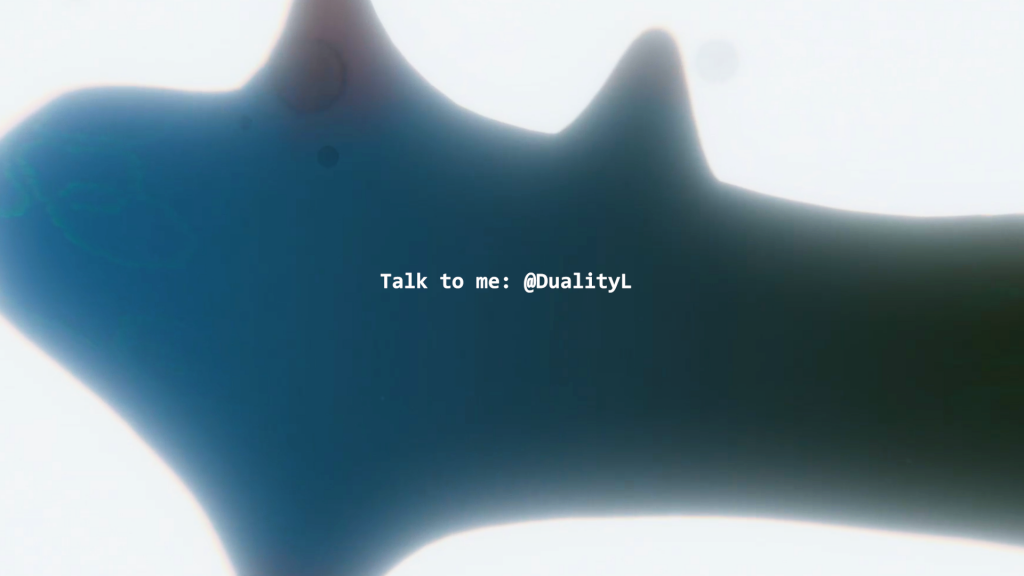 Duality of Life by Nexus Studios is a playful artificial life form and ever-evolving digital interactive artwork that responds to external stimuli and data. A totally innovative and a genuine feat in real-time technology and art. It ‘s been made for Brighton Digital Festival, permanently located at the University of Brighton’s School of Biomolecular Sciences.

It features an artificial life form that reacts to visitors and the world around it. Genetic algorithms and a variety of external stimuli determine the behaviour and real-time evolution of the life form, throughout the academic year. Onboard cameras, microphones and environmental data feed from the University all affect Brighton University’s digital resident.  Whilst social media attention and the presence of a crowd will delight, a sudden loud noise, for example, will see it scuttle away.

The interactive artwork comprises of two back to back high-resolution digital screens that are in constant relation to each other; the ‘life form display’ (life as seen under the microscope) and the ‘eDNA display’ (an incessant data flow of information). The transparent physical build which contains the screens exposes the life form’s inner workings.

Using a series of bio-inspired algorithms and rules (displayed on the eDNA screen, along with actual source code) and machine learning, a new, self-aware creature is ‘born’ and evolves over the course of a month, in response to real-time input from the environment, staff, students and visitors.

The digital being possesses some quite human traits. Playing to the built-in camera and computer vision, it is conscious of its own beauty; the more people look at it, the more it can grow, pigment itself, or slow down its metabolism. Environmental data feeds (temperature and light) from the University also influence the development of the life form, as do onboard microphones that sense outside vibrations; a sudden loud noise and the creature will quickly scuttle out of sight. It could be considered vain too; every night, the life form takes a ‘selfie’ (a snapshot of both displays) which is uploaded to Twitter (@DualityL); a ‘like’ or comment giving a special boost to the evolution parameters.

By the end of one academic year, the creatures will cohabit in a virtual ecosystem before reverting to cell-like structures. The process then begins all over again at the start of the next academic year, mimicking the life cycle of a student.

And nobody really knows exactly what will evolve. Nexus Studios’ Creative Technologist Vegard Myklebust (who programmed the life form) says “We have an idea of the sorts of variations that might happen but as it’s going to evolve over the course of many years with the students, it partly depends on them.”

Elliott Kajdan, who was Nexus Studios Creative Director on the project says “We’re taking the concepts of evolution and applying them very speculatively to something that’s evolving for beauty. We haven’t predetermined a happy ending, just like humanity the life forms have flaws, but I think there’s a certain beauty in all of them.”

The piece is the winner of a public art co-commission, which was awarded to Nexus studios, an Academy and Award-nominated animation studio.