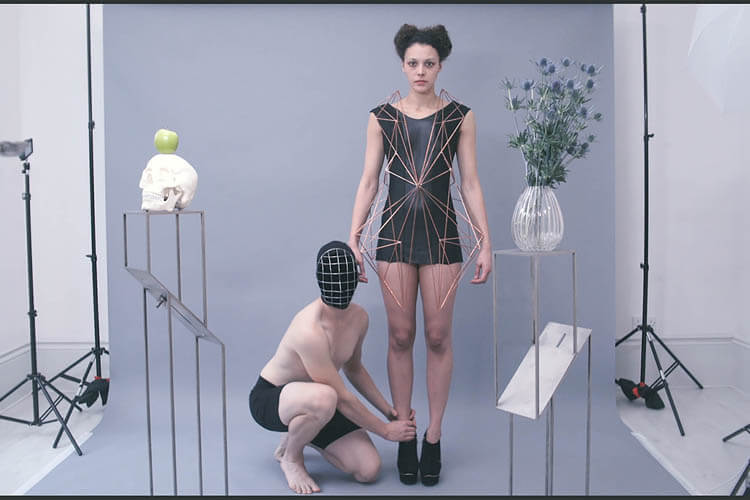 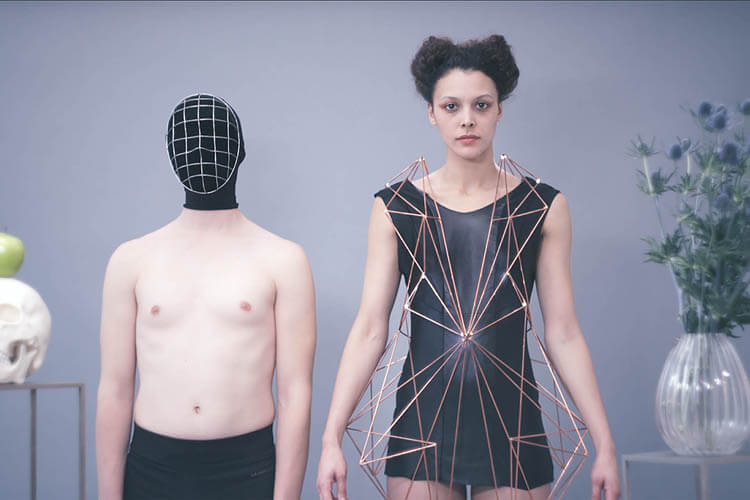 ‘I’m constantly trying to reframe the field of electronic textiles by asking myself what does this technology mean and what is it capable of bringing to people’s lives?’ Tells us Melissa Coleman, an artist, and curator with an extraordinary curiosity about electronic textiles and wearables technologies. Based in Rotterdam (The Netherlands) Coleman is also co-founder of Rotterdam’s V2_E-textile Workspace and the London E-textile Meetup that takes place at the V&A Museum.

Melissa Coleman is a storyteller. She tells stories through her artworks, the workshops she runs and the exhibitions she curates. Her stories are about how wearable technologies are reshaping our present and our not-too-distant future. Her curatorial series Pretty Smart Textiles that took place in Belgium in 2010, 2011 and 2012 were a unique opportunity to explore the new technologies applied to fashion. The series are a multi-sensory experience to discover that another world of electronic textiles is out there. On the other hand; her speculative design The Holy Dress (2012), a collaboration with Leonie Smelt and Joachim Rotteveel is a  journey to a future scenario in which a dress takes the place of the moral checking on the lies we tell. The dress, electronically enhanced, analyses if the wearer is lying through voice stress analysis. If the dress detects that the wearer is lying it punishes him/her with an electric shock.

The intersections between fashion, technology, and textiles are blurring and, what we thought clothing (and fashion) was is not anymore. The possibilities of the wearable technologies and e-textiles are quasi-infinities, but we have been careful how we use technology. As Coleman points out ‘technology [and capitalism] is overstimulating us because it’s trying to convert all of our attention into money.’ 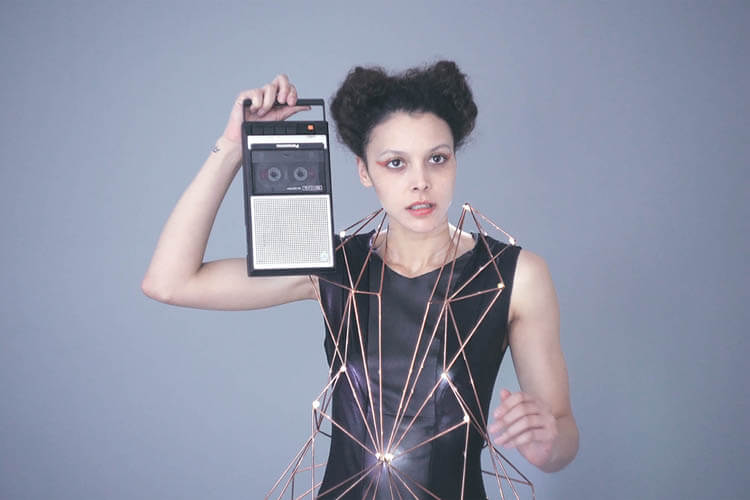 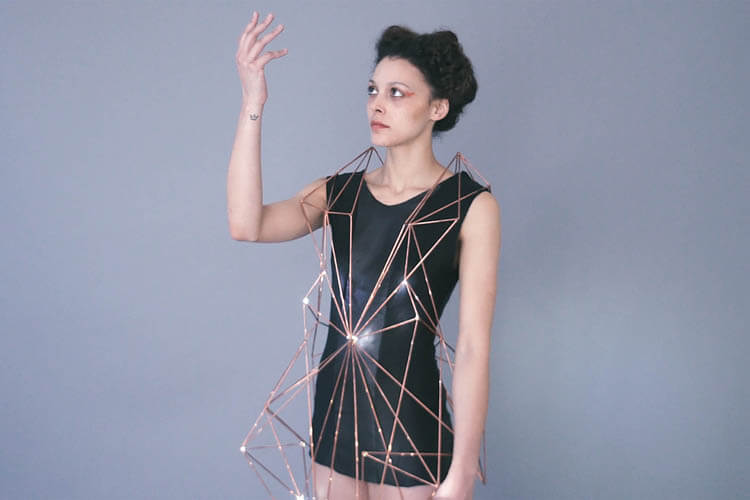 What drew you to working at the intersection of speculative design, electronic textiles, body performance, sense augmentation with a politico-philosophical angle? Could you tell us a little bit about the intellectual process?

My work is a mixture everything that fascinates me: the things I read about, the conversations we are having as a society, the work of other designers that I love, the materials I’m working with. Design is like a puzzle to me. I’m constantly trying to reframe the field of electronic textiles by asking myself what does this technology mean and what is it capable of bringing to people’s lives? I think people sometimes count too much on technology to do the storytelling while at the same time assuming that technology is neutral. Technology reflects the values and blind spots of the people creating it. I try to show that face of technology.

A criticism of technology in fashion is that technology only communicates itself, a fantasy about the future because we have no history and stories around wearable technology. I see it as my responsibility to try and change that. I want to tell stories that are poetic, but also relevant. I make sure that my stories are rooted in the issues we’re facing today because ultimately I don’t care about a potential future. I care about the world we are experiencing right now.

Photography as a way to communicate wearable technology leaves a lot to wish for. You probably don’t get around the need of creating a strong image, but designers of wearable technology increasingly realise that film is better suited to the storytelling aspect of what they do. When you’re focusing on fashion that moves, changes colour or transforms in some way over time, the film is incredibly well equipped for showcasing that. I think that coming out of ASVOFF9 that idea will become even clearer.

Wearable technologies have the ability to communicate with their owners, and by doing so, the boundaries between physical and digital are blurring. How people respond to multiple stimuli in a digital environment beyond the touch of a screen or button is one of the questions to answer in this 21st century in which people live in a hyper-connected society. In which ways do you think are interactive and digital technologies changing or affecting human behaviour?

All technology, from augmented reality to wearable tech to social media, is a window into one big digital cloud that is vying for our attention and trying to get us addicted to it. I’d like to think that, in time, wearable technology will have the advantage of being more context-aware so that it only bothers us with the things we care about in any given situation. But I wonder if capitalism will let that happen. I’ve always hoped that wearable tech would make digital experiences more like physical experiences.

My worry is that it’s likely to be the other way around and that physical experiences are increasingly becoming digital. Right now we’re trapped in an economy of advertising where your attention and behaviour data is what’s making companies like Facebook money. Until capitalism finds a different way of making money from you through the internet, I’m afraid we’re stuck in a place where digital things are trying to talk to us all the time no matter what. People often try to frame the advancement of technology as the driving force behind how we’re experiencing technology, but I think forces like capitalism have a strong hand in it too. Technology is overstimulating us because it’s trying to convert all of our attention into money. It’s a bit scary.

As a curator, what would be your biggest extravaganza?

To invite all my heroes and commission them to do new work around a theme I love like the Bio Techno Rebellion and create an exhibition design that’s as experiential and gorgeous as the works on display. I’d love to have a room with a fountain of glow in the dark slime that moves around the space or a water wall containing bioluminescent plankton that lights up with every tremor. My sweet spot is the experience where things are weird, smart, exciting and beautiful in equal measure.

Cling film. I wrap my artworks in bubblewrap and cling film before sending them across the world. It’s the best.

(Photo credits: Photos by Sanja Marusic. Dress made by Melissa Coleman, Leonie Smelt and Joachim Rotteveel. All photos courtesy of the artist)