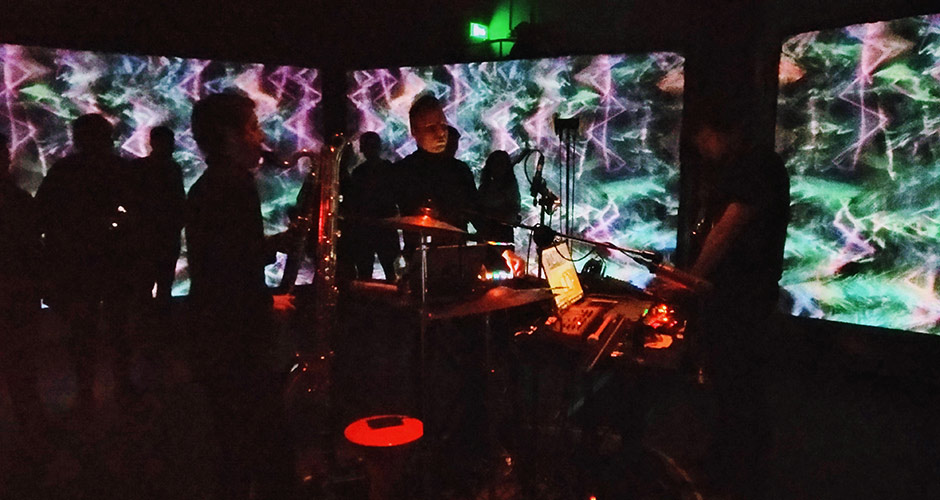 [UNIT] is a new collective of artists working to create immersive audio/visual music and video performances and installations. At the moment comprised by Bill Vine, Anthony Bailey and Henry Driver these artists and musicians are creating a large scale sound and image performance and installation work that draws together acoustic and electronic musical instruments, live video generation and processing and live audio processing. A project starting a  few years back (sellout debut performances were held at St.Mary’s Works, Norwich, in September 2016 and Colchester arts centre in 2017), seems UNIT are harvesting a deserved attention. In January 2019 [UNIT] undertook a week-long residency at Norwich Arts Centre, culminating in an exhibition/installation and six live performances.

We had a chat with Bill Vine so he could explain us a bit more what are the aims behind the project and where they want to take the project into, as they already have been commissioned by Norwich Arts Centre to create a new version in October to celebrate the 50th anniversary year of the moon landing.

What is the intellectual process behind the project?

We’ve approached [UNIT] from the perspective of wanting to create work that brings the audience much more into not just the performance process, but also the compositional process, so that their presence affects the material we are playing and how we are playing it. In a sense we hope to make something with elements of democratic procedure; when we perform I feel like we have a responsibility to the audience almost to ask them, without doing so directly through words, is this the direction you want us to take? Should we move to the next section? That sort of thing. So we have to be very mindful not just of each other, but of the audience as well. We create a space that encompasses audiences and places us as performers at the centre so that they can move around the space if they want to, but do not feel pressured into this activity. The 3D audio and video elements are created in such a way as to create dialogue and conversation between the two, rather than have the one reacting to the other or vice versa. I come very much from a background of creating intermedia work that inherently contains elements of chance and of risk, not knowing exactly how a performance will unfold, and through the processes described [UNIT] adheres to this approach as well.

What reaction do you expect from the audience who interact with the pieces and what makes the set up particularly special?

We hope that audiences will feel involved with the performance and come away not just feeling like they’ve been to a great gig, but also that they’ve helped to make that gig great in a very direct way. We think that the setup is special because it necessarily responds to the space that we’ve installed it in and it’s tuned and adapted to that space. So the characteristics of whatever building we’re in, become a part of the sound and feeling of the thing. I’ve always been attracted to immersive art and performance and the way in which it makes you feel very much at the centre of what is going on, and much more able to feel the art, so hopefully audiences of [UNIT] will have an experience like this that they can come away from having been transported to somewhere very much away from the outside world.

After the Phase I experience, what are the challenges for Phase II?

The challenges for Phase II of the project are to find a broader variety of spaces to set up and perform in, and to add different artists into the mix and to see where that takes us. We’re really lucky to have been able to work with the visual artist Dan Tombs on Phase I, and this time around we’re also bringing in another amazing visual artist, Henry Driver, to see what results will emerge from changing this element. We’re also planning on augmenting some performances with additional musicians and it would be really interesting to try to get Henry and Dan to work simultaneously on the visual element at some point. It’s a huge undertaking to set up a performance due to the scale of it (each of the seven projection screens is 3.5m X 2.5m) so finding spaces that are big enough is a challenge before we even think about anything else! Having said that, we’ve found we can work around the architecture of a building to achieve some really beautiful results, such as incorporating the pillars of medieval churches into the performance space and squeezing the layout of the screens into different shapes and configurations to work with where we are. We always wanted it to be reconfigurable and we’re finding out through necessity that it is!