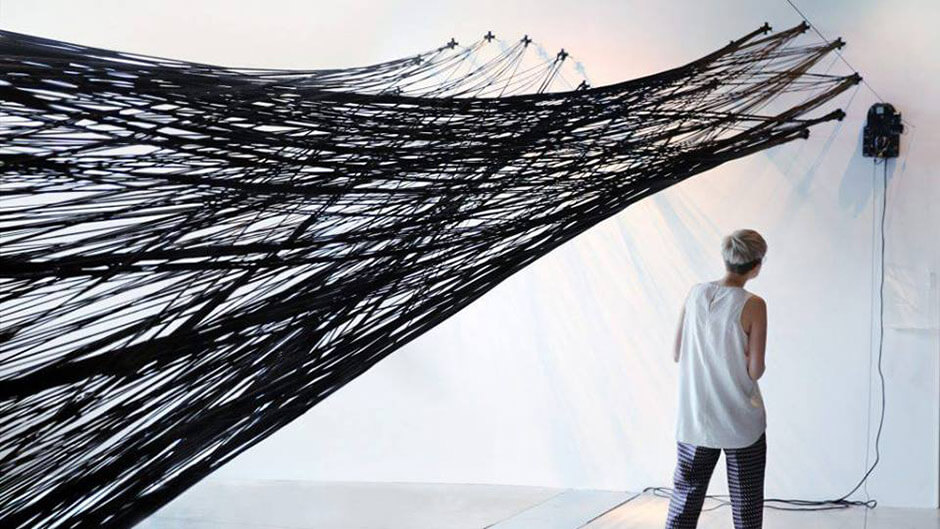 Kapelica Gallery (founded in 1995 in Ljubljana) is one of the reference institutions for contemporary investigative arts worldwide. Their transgressive programme, which consists of spatial installations, performances, sound research and theoretically reflective lectures, aims to challenge scientific and technological applications, biopolitics and urban phenomena, addressing both professional and the general public. The gallery programme has been developing as a response to the profound changes in society (posed by technological advances and their impact on our planet and societies), including artistic activities and expressions that reflect contemporaneity and interpret the possible future scenarios.

Kapelica’s new exhibition, which opened on the 13 December, sees Maria Yablonina presenting MoRFES (Mobile Robotic Fabrication Eco-System). Maria Yablonina is an architect finishing her PhD studies at the University of Stuttgart, where she is developing different robots that she uses to weave structures. She has been working with Achim Menges, one of the leading figures in the most advanced digital construction methods and cutting-edge design and architecture.

Maria Yablonina employs ‘swarm constructing‘ – a fabrication method predicted to be common in the future, that involves swarms of small robots working together. Her research revolves around nylon string constructions that are inspired by various weaving techniques used by spiders when weaving their webs (something groups in the MIT’s media lab have also been researching). With the use of specially constructed robots that can climb walls and specially created constructions, the artist creates spatial sculptures, unique hanging or spread-out biomimetic architectures, which could lay the foundations for an interesting expansion in the construction field, expanding upon similar structures and dome constructions as known to us from the work created by the architects Pierre Luigi Nervi and Buckminster Fuller.


Kapelika believes it is important to present Maria Yablonina’s work due to its interesting use of robots which hover between industrial and artistic. The meaning of their use remains in the field of art and research, however, their implicated functionality can be found in the construction field bordering on science fiction, but a direction that seems it where we are heading towards, industrial construction seems it´s at the border of a paradigm change.

The poetic and totally non-political work MoRFES transforms existing spaces into labyrinths, in which we can see the architecture of the future, in which robots create architectures autonomously with each other.