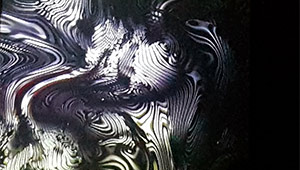 Cafe OTO recently hosted the first London DIAGONAL night in over a year, the main attraction being the teaming of Diagonal label boss Oscar Powell and conceptual electronic music maverick Russell Haswell as HP, the culmination of a working relationship that started way back in 2013. There was much speculation as to what these two would present. They were joined by labelmates Viviankrist, NHK and Handy.

Arriving at Cafe Oto just when the first act had finished, core Diagonal faces visible in the crowd.  We managed to catch up briefly with Powell and Haswell before their performance and they shared they had only been rehearsing for the 4 last days, so anything could be expected.

Both Haswell and Powell sat amongst a pile of modular gear on the floor and the whole vibe was very much that of an informal jam session. The performance was closer to the usual harsh histrionic heavy noises of Haswell with Powell joining in on the general assault on the eardrums. Haswell’s previous Diagonal record was very much swinging in the direction of their Technoid ‘New Beta’ house style but this was very much dragging things back to his lab.  They traded slab of abrasive noise, sometimes solo, sometimes together, Haswell having a having a lie down to take in the visual show when Powell was at the fore at one stage. They manage to bring about over 40 minutes of harshness bliss.

Not less impressive were the visual provided by Mattias Gmachl, a founding member of farmers manual (famous in their own right for their place in the Viennese Experimental Glitch music scene in the 90s alongside Peter Rehberg etc) and an incredible visual artist. The generative visuals went from a blob of ever-changing colours, shapes and textures, to more geometric figures to end up in 3d scans of the artist’s heads translated into cybernetic looking figures in an icy purple and disrupted into fractals by the audio,  moving endlessly in a sort of virtual despair.

The night continued with NHK and Handy, who carried on pummeling the . One thing felt clear, Diagonal still keeps that muscular punch it’s always been famous for.