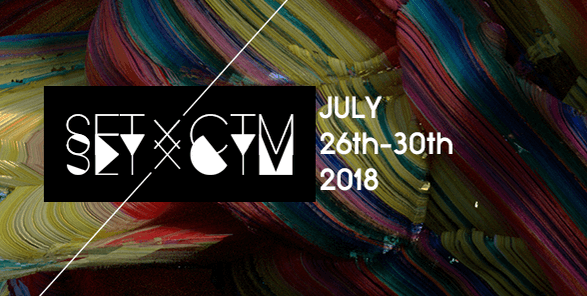 Sote, or Ata Ebtekar, is one the most prominent current Iranian composers and sound artists. He produced one of the most exciting (and one of our favourite) albums from last year, Sacred Horror in Design (which has recently been added to the catalogue of Split Music, the publishing agency that with a roster of experimental electronic music creators is renowned for placing music on trailers and brand films). Based in Tehran, Sote is also one of the founding artists of SET festival and one of the motors behind the vibrant and growing experimental art cultural scene in the country. Following several years of active exchange with CTM, one of the most prominent Berlin’s experimental music festivals, SET festival this year will be dedicated entirely to artistic dialogue with CTM. SET’s 4th edition will take place 26-30 July 2018 in Tehran under the name SET X CTM festival. Performances will come from the hand of Monolake, Rabih Beaini, and Iranian artists Rojin Sharafi  and 9T Antiope. Sote will also present Sacred Horror In Design, ahead of its upcoming vinyl release.

Sote’s productions balance between the harshest clanging techno to more melodious ambient. The album for Sacred Horror in Design came after the initial project, a commission by CTM Festival as an audio/visual show in collaboration with Tarik Barri (visuals) and Iranian musicians Arash Bolouri and Behrouz Pashaei, who are virtuous of the santoor and setar, two traditional acoustic instruments. The commission was inspired by CTM’s  2017 theme of ‘Fear Anger Love’, exploring the relationship to Sote’s childhood following the 1979 Iranian revolution. Sote shared with us : as you know, this project was commissioned by CTM. At first, it was only developed for a live performance. Years ago, I had worked on two other projects which involved Iranian music (both released on Sub Rosa). But they were both very different than Sacred Horror In Design (in approach, style and an end result of the sound and aesthetics).

The album opens, and a sense of familiarity strikes. Anyone who has enjoyed flamenco music, the traditional folkloric music from the south of Spain, will recall some resembling structures and sounds. It turns out, over 1,000 years ago, a polymath known as Ziryab made his way from Persia to the Iberian city of Córdoba, bringing with him the music of his homeland and profoundly influencing the Spanish form we know as flamenco today. He’s even credited with inventing the guitar, by adding one more string to the Middle Eastern oud.

With Sacred Horror in Design Sote turns doubly ambitious: while safeguarding the beauty of the Persian musical tradition, at the same time transforming it into new structures, which might well become the folklore of the future. How difficult is to translate one musical language into another? Sote himself explains: to simplify, the most challenging part was to make the Iranian scales and modes work with the electronic components without any compromises on either part. I did not want to process the instruments. They are supposed to work in harmony with everything else. In this paradoxical, contradictory environment, they end up uniting beautifully for a new and unique experience.

When asked how he approaches his composition he goes on: To be honest with you, the way I approach my compositions, in general, is purely emotional towards synthesis and patterns. I’m crazy about patterns and sound design which both become instrumental parts of the whole composition. However, in my opinion, the most interesting sound or layers of patterns are weightless if the actual end result (composition) is weak. So, synthesis is my passion. But synthesis/electronic music has to result in an astounding piece of music (composition).

For the live performance, real-time visuals are produced by Tarik Barri, known for his collaborations with musicians like Thom Yorke, Monolake and Nicolas Jaar. Analogous to the contrasting elements within the music, the visuals express a constantly shifting dynamic between traditional Iranian patterns and noisy, colourful digital distortions, sometimes in harmony, sometimes in violent opposition. Sacred Horror in Design A/V boldly both builds and burns bridges as it explores relationships between past and future, image and sound, electronic and acoustic, audience and performer.