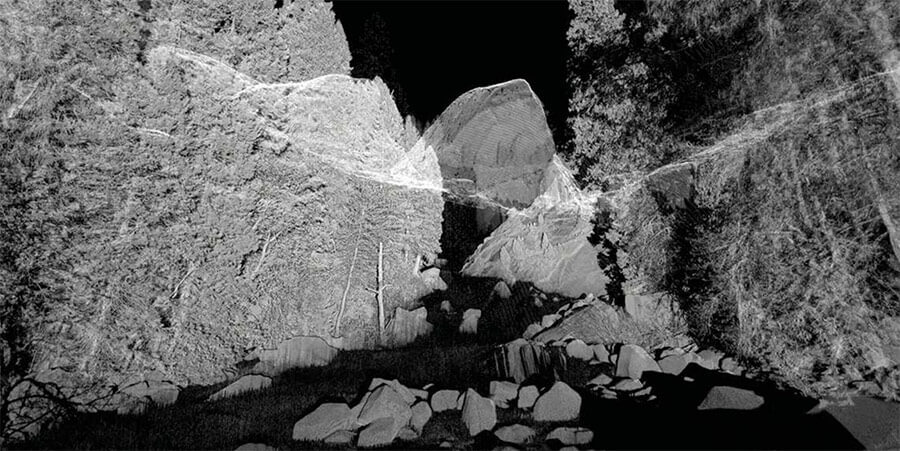 Post- lenticular Landscapes is a project by ScanLAB Projects, a pioneering studio specialised in large-scale 3D scanning. It was the recipient of the 2015 LACMA Art + Technology Grant funded by the Los Angeles County Museum of Art and Hyundai. After a big success in Los Angeles, the exhibition documenting the project is now on view in Seoul at the Hyundai Motor Studio until 24th June.  The holographic car ‘Urban Diorama’ is exhibited with unique prints from 3D scan data and a point cloud animation of Yosemite Valley.

Post-lenticular Landscapes was envisaged as a re-enactment of the early photographic expeditions of Watkins, Weed, Muybridge and Adams into Yosemite National Park. ScanLAB’s journey, in Summer 2016, was not equipped with cameras but instead with the latest terrestrial laser 3D scanning equipment. In the 1870’s Eadweard Muybridge looked to Yosemite as a setting to test his pioneering photographic techniques. From these initial pioneers to something beyond what we know is to look behind a lens, as the name appropriately reflects. ScanLAB seem to be cartographers of the invisible, whereby scan electron microscopes reveal the hidden shapes and groves of minuscule objects and organisms. The project findings appear as haunting holographic apparitions.

With their work ScanLAB projects are challenging our limits of visibility. With this pioneering the use of large 3D scanning – which they describe a form of machine vision that is the future of photography- they are reinventing and reinterpreting the way we may look what’s around us. And as they predict, the electronic eyes for billions of mobile phones and driverless vehicles, 3D scanners will become the cartographers of the future.