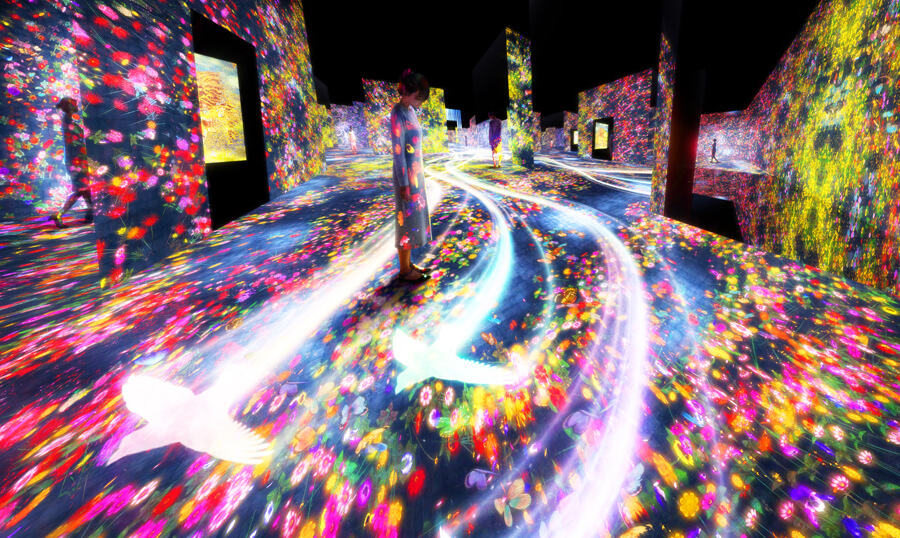 What is the imaginary idea we have about what a digital museum would look like? Somewhere with walls and floors filled with large multimedia interactive pieces instead of paintings and sculptures? This dream for some it’s coming to reality very soon as the tech-art collaborative teamLab have announced they will be opening their first permanent exhibition space in the Palette Town complex of Odaiba, Tokyo in the summer of 2018: the “MORI Building DIGITAL ART MUSEUM: teamLab Borderless”. This new concept is a collaborative initiative between Mori Building and teamLab.  This interdisciplinary creative group creates installations and exhibitions usually consisting of several multimedia interactive pieces in multi-room environments, such as the one that took place last year at PACE Art + Technology Gallery (California, USA) which spanned 20,000 ft² and showcased more than 20 works.

In the last few of years there’s been an increasing number of artists, designers and theorists working, writing and expanding on the tantalising idea of the digital world blending with the material. This has become a raison d’etre for teamLab, an interdisciplinary group of ultra-technologists whose collaborative practice seeks to navigate the confluence of art, science, technology, design and the natural world. teamLab envisaged this museum of the “future” with an aims to explore a new relationship between humans and the world through art. In their words, ‘(…) Digital technology has allowed us to liberate art from the physical and transcend boundaries. We see no boundary between ourselves and the world; one is in the other and the other in one. Everything exists in a long, fragile yet miraculous continuity of life. That is the universal concept of teamLab’s creation.’

‘Digital art has been liberated from the constraints of material substance. The feelings and thoughts that were incorporated into artwork through a physical medium can now be directly transferred to people (visitors) through experience. Unlike physical materials, people move freely with their bodies, form connections and relationships with others, and recognise the world through their bodies. The body has a concept of time, and in mind, the boundaries between different thoughts are ambiguous, making them influence and sometimes intermingle with each other.’ they add to explain the conceptual framework behind the Digital Art Museum.

The museum will have 10,000 sq.m of gallery space to showcase the “Borderless” concept. The word “Borderless” expresses the museum’s aim to tear down the borders between “one art and another,” “art and visitors” and “oneself and others” by allowing visitors to melt into the art and become part of it. ‘If an artist can put thoughts and feelings directly into people’s experiences, artworks too can move freely, form connections and relationships with people, and have the same concept of time as the human body. Artworks can transcend boundaries, influence and sometimes intermingle with each other. In this way, all the boundaries between artist, people and artworks, dissolve and the world teamLab Borderless is created.’ teamLab said.

teamLab told us more deeply the grounds they want to break and the concept of the museum. First, ‘digital art has been separated from materials and liberated. While each work remains independent, the physical boundaries between the works disappear, making them influence each other and sometimes intermingle.’ Secondly, ‘released from material substance, digital art allows our bodies to become more immersed in the artwork than ever before. The medium can be transformative, and the movement and behaviour of people can cause visual changes in the artwork. People lose themselves in the space of teamLab Borderless. And as they wander and immerse themselves in this unified world of artworks that transform according to the presence of people, the boundaries between the world and people dissolve.’ And finally, ‘one unified world of borderless artworks transform in perpetuity due to the presence of self and others. By immersing and melding the whole body together with others in that world, self and others will have continuity with ambiguous boundaries in between.’

For its development teamLab have partnered with Mori Building, an innovative urban developer also supporter of culture and art based in Tokyo. People behind Mori Building have a very clear idea where they want to see Japan in a global landscape:  ‘According to the “Global Power City Index” ranking announced every year by the Mori Memorial Foundation, a research institute established by Mori Building. Tokyo is ranked third after London and New York in the latest 2017 results with the city’s overall power.’ So to strengthen the overall power of Tokyo, ‘it is essential to overcome the weaknesses while strengthening the strong points: Tokyo is the world’s largest economy, the city’s safety and environment are good, and also, the food is delicious.’ On the other hand, ‘it is clear that Tokyo’s problems lie in the lack of cultural resources’ they said. ‘Tokyo should, and can imitate London, using the Olympic and Paralympic Games in 2020 as a jumping board, to improve its comprehensive power.’ With this new museum Mori Building hopes ‘to attract people from all over the world to Tokyo by creating the brand-new and unique museum that offers unprecedented digital art experience.’

‘teamLab’s aim is to create a new experience, and through such experience, we want to explore the new relationship between people and the world, and what the world means to humans.’ And while waiting for this new-brand museum they are presenting Au-delà des limites from May 4 to September 2, 2018 at La Villette in Paris France, an exhibition that ‘explores the role of digital technology in transcending the physical and conceptual boundaries that exist between different artworks.’