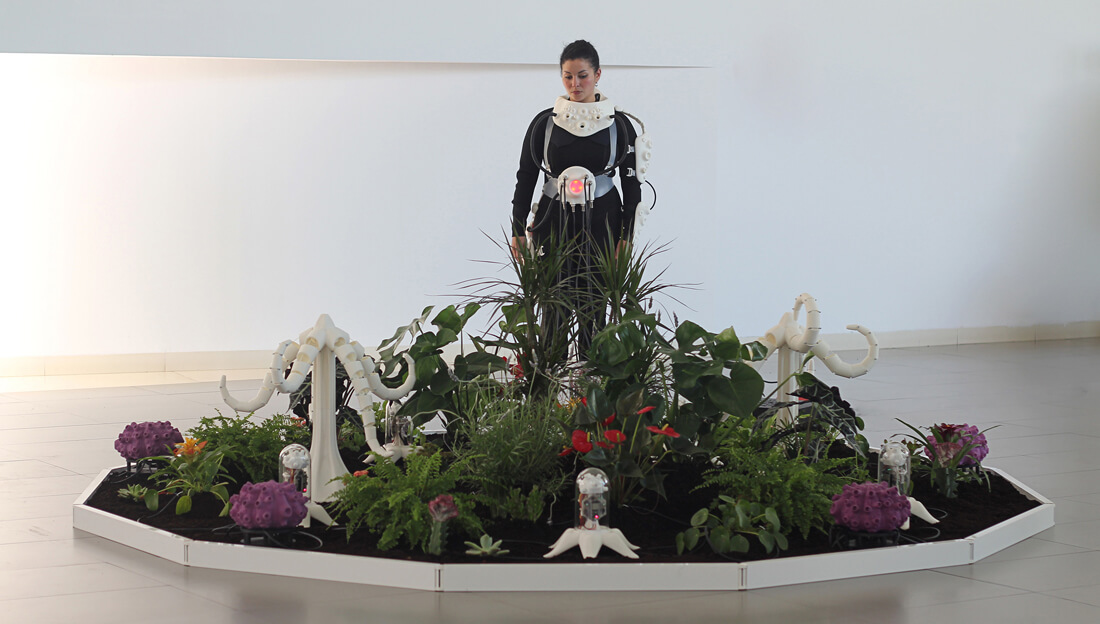 Maria Castellanos is an artist and researcher exploring relationships between body and technology in a number of significant art&science projects. Her artistic practice is driven by a motivation to establish the genealogy of the bodily technology interface; in other words, wearables. And henceforward prosthesis and wearables are significant components of her body enhancement research through which she finely deconstructs normative categories and alters our understanding of what counts as a human in the present day.

Being grown up with a maker culture, craft and technology are part of Castellanos’s life since her early ages. Inspired by a maker approach, her artistic practice today has largely used open source software, DIY and DIWO methods, and illustrates values of a maker culture. Her works dealing with wearables and technological prosthesis align well with Donna Haraway’s cyborg approach and critical posthumanism discussions. Fascinated with the connexions between wearables, cyborgs and feminism, Castellanos uses the idea of cyborgisation as the possibility of not only remaking ourselves but also deconstructing our socially constructed identities. It has to be mentioned that projects of Castellanos are important examples of decentralization of the dualism(s) prevalent in humanistic thought, and scrutiny of the body as relational and fluid rather than being fixed and complete entity.

The Plant Sense (2018) is one of her latest works designed together with Alberto Valverde with the supports of the VERTIGO project and LABoral Centro de Arte. Duo explores how plants experience and respond to their surroundings by using a wearable device which allows them to receive data from the plant. The Plant Sense makes the communication between human and plants possible and enables us to feel the senses of the plant in our own body. Accordingly, the installation contributes to dissolving of the boundaries between human and nonhuman and shows that we are all detecting changes in our surroundings and responding accordingly. The Posthuman Trial and Error (2016) is another project of Castellanos dealing with beauty ideals in the context of posthuman in the cyborg era. 3D human-scale sculptures explore different ways of looking at the presence and allow us to (re)question and (re)think on how posthuman will be.  Thus, The Posthuman Trial and Error can be seen as an intriguing experiment in bridging the discourses of posthumanism and cyborg experience.

Castellanos’s other project is Environment Dress 2.0 which was on the show at Ars Electronica in 2016 and co-produced again with Alberto Valverde. The smart dress offers new insight into the relationship between the human body and the external environment and shows how environmental factors and conditions affect moods and behaviours of people. Symbiotic Interaction and Symbiotic Future are two other projects of Castellanos which address symbiotic relationship between human and plant on the hand, and a future scenario on how posthuman would live together in a perfect symbiosis with other-than-human living organisms on the other hand.

As can be seen, Castellanos has been addressing how human capabilities can be enhanced by technology that natural sensors would not detect? in her engaging art&science projects. And this query is surely a subject matter of the new relations and protocols between body and technology which emphasise a shift from biological through cultural to technological bodies and calls for a demanding research on the cutting edges of art and science as Maria Castellanos has been doing. 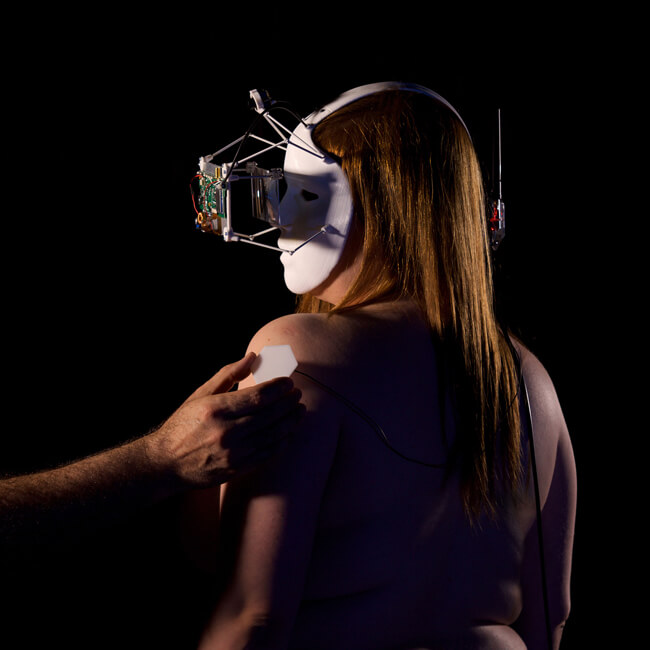 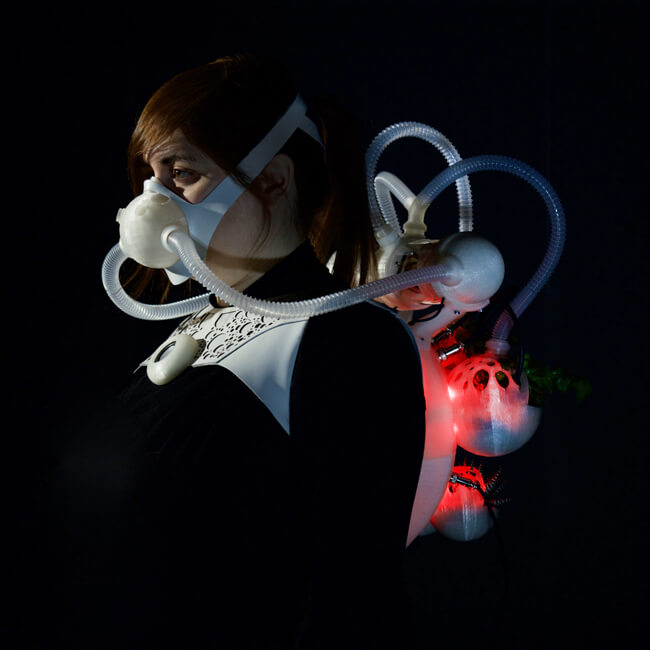 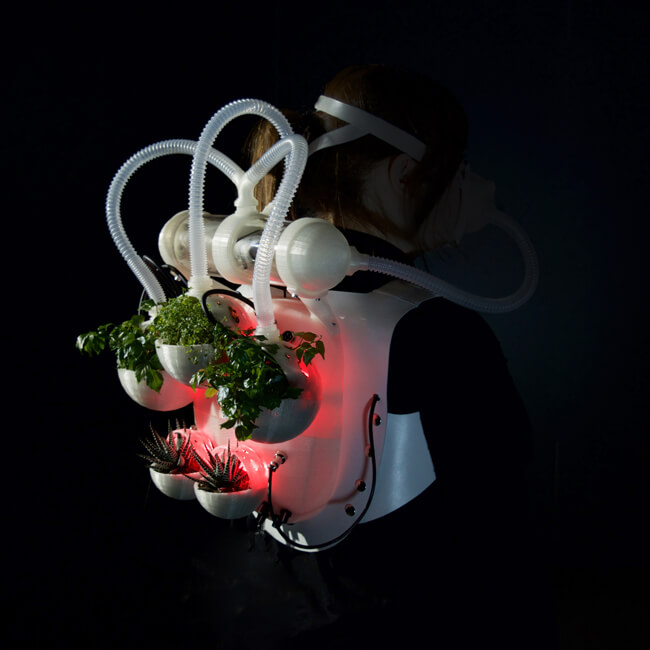 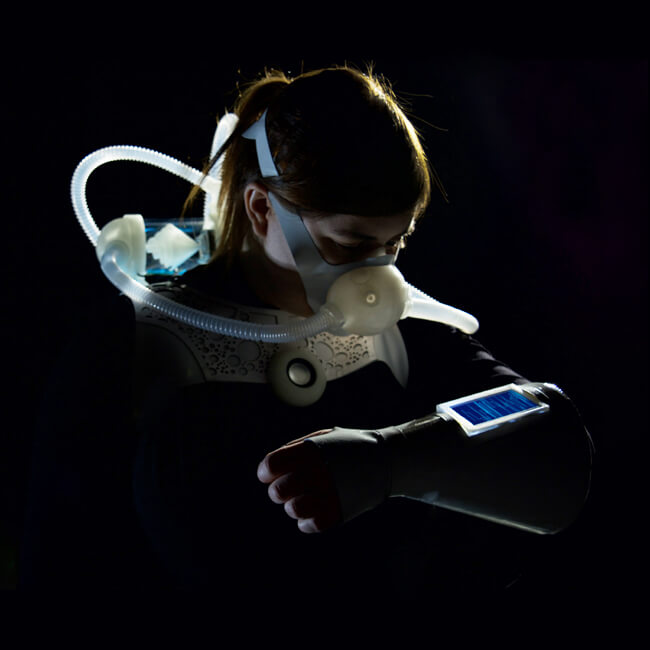 You are an artist and researcher whose research is focused on technological prosthesis. For those that are not familiar with your work, could you tell us a bit about your background and when and how did the fascination with cyborgs and wearables come about?

Well, in the last years of my degree in Fine Arts I started to focus my work on the human body. Then during my PhD, fascinated with the Sabine Seymour’s well know book ” Fashionable Technology” I started to focus my artistic practice and my theoretical research in the relationships between our body and the technology. I started to deep in my research and I realised that wearables and cyborgs were the key to the body enhancement research. I discovered the work of the Canadian researcher Steve Mann, regarded as the godfather of the cyborg, who usually wears his own technological devices in his own body. However, Mann has devoted all his life to developing devices that enhance our senses, and he also coined the term “wearable computing”.

During my research, I also went deep in Donna Haraway’s feminist theories about the cyborg. “The Cyborg Manifesto” by Haraway was very inspiring for me. With Haraway, I discovered that she had already named that issue that I had always worried me about bodies. Breaking the boundaries, and going beyond the dichotomies human/technology, human/animal, etc. So, I was really fascinated with the connexions between wearables, cyborgs and feminism, so that was the starting point of my research and my current artistic practice.

In the other hand technology and crafts have always been in my daily life and my family. So I do not believe that my choice is any coincidence. I mean, my father is a geek and since I was a kid I always saw strange devices at home. We also used to have fun together dismantling old electronic toys during the weekends. On the other hand, my mother has a lot of expertise in sewing. And she didn’t just build our clothes, she also used fabric and threads to builts objects or things that I asked when I was a child. So in the nineties, there was no term “maker”, but I grow up in a family with two really great makers. Now I simply use other tools like Arduino or 3D printers to built my artworks.

In The Bionic Skin, you investigate the technological prosthesis, focusing on the hybridisations among cyborgs and wearables, as a paradigm of expanding of the human sensorial capabilities. What are your artistic and intellectual aims behind this project?

I started my thesis making an archive, in which I included artists, designers, technologists, and other researchers who contributed with milestones from different fields, in which they research about how they can enhance or modify human capabilities. I wanted to establish the genealogy of the bodily technology interfaces from the point of view of the artistic practice, from the surgeries of Stelarc to the DIY movement to develop bodily technology interfaces, or in other words; wearables.

During the process, I realised that during the sixties the foundations of the present bodily technology interfaces were established through four artists whose were in different parts of the globe, at the same time that the special race was taking place, and the Space Scientists Manfred Clynes and Nathan S. Kline. Coined the term cyborg to refer to an enhancement human being able to survive in extra-terrestrial environments. The theoretical research that I were doing allow me to understand the current state of the bodily technology interfaces. Through my artistic practice I started to think about the future, to ask my self through my work how the future human being could be in some years.

Wearable technologies have the ability to communicate with their owners and by doing so the boundaries between physical and digital are blurring. How people respond to multiple stimuli in a digital environment beyond the touch of a screen or button is one of the questions to answer in this 21st century in which people live in a hyper-connected society. In which ways do you think are interactive and digital technologies changing or affecting human behaviour?

Well, I think that we are still really physical. For example, VR technology focuses more in create haptic interfaces to feel more through your skin, to be more immersive, and these are wearables. On the other hand, it’s clear that the Internet and more specifically some Apps contribute to change the way in which we interact with other people, and is possible that in a few of generations the paradigm of a personal relationship changes completely.

I guess that I will continue researching about body enhancement and wondering about possible futures through my artwork.

The lack of time.

(Photo 1 from the series The Plants Sense, 2018. All photos courtesy of the artist)