Arcade East is presenting an exciting workshop next Monday 13 August. Run by UAL researchers Maria Dada and Gareth Foote, ‘Hybrid Bodies’ sets out to explore the ways digital technology manifests itself in relation to bodies and their bio-economic sustainability in an attempt to imagine potential applications.

Why is it that most body parts are regarded as a person’s property, but the genitals -or gender- are subject to the law and governmental legislation? With this premise and taking the work of Paul B Preciado, one of the leading thinkers in the study of gender and sexuality and the influence of technology on them, as a starting point, the workshop will explore the types of subjectivities and hybrid bodies that are enabled or regulated by market dynamics. The aim will be to design the means to augment the body and to create hybrid bodies possible only in unregulated spaces; hybrid bodies that ridicule, queer and deceive pharmaco-digital technologies of power.

Preciado began a “slow transition” where he started the process of becoming a male, physically. He administered illegal high doses of Testogel to experiment with the limits of his bioeconomic subjectivity.  Pharmaceuticals or biotechnologies, such as Testogel, in overprescribed doses, can only be found at the perimeters of the market, on the unregulated deep web. For Preciado, there is no such thing as gender without technology; and technology has been a player in defining gender through its many different forms (from biotechnology to image production). In a similar way to Preciado, the workshop will experiment with the representation of subjectivities enabled by the unregulated space of the Internet or the darknet.

The workshop is part of an extended project around dataqueering and queering computation initiated by Maria Dada (a fellow at the Digital Anthropology Lab) and Gareth Foote (Course Leader for BA Information and Interface Design at London College of Communication). Dataqueering is the practice of introducing enough irrational bias, dark web testosterone, confusing biomarkers or queer gait movement data to push regulation to its extremes.

The workshop is also part of the summer programme of Arcade East, London College of Fashion’s new project space. Developed to host a season of themed events and installations, the project’s focus on digital practice and innovation each summer as part of a new LCF Arts Programme. Most projects are developed in conjunction with a new interdisciplinary space – the Digital Learning Lab, operates at the intersection between traditional and digital practice for design, making and ideation. This summer’s programme focuses on Sustainability and Innovation. 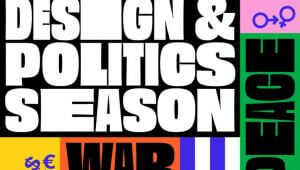