A new commission at Art Basel in Switzerland this summer (14-17 June) will immerse its visitors within millions of data points collected by the Large Hadron Collider (CERN; Switzerland), an installation that aims to make universe’s tiny particles visible and audible. English artists Ruth Jarman and Joe Gerhardt, aka Semiconductor, will present HALO, a large-scale cylinder within a darkroom, another of their pieces exploring the materiality of our world and how humans experience it through the lens of science and technology.

This commission will be the fourth Audemars Piguet Art for the fair. The Swiss watchmaker is a long-standing Associate Partner of Art Basel, and collaborates every year with a selected curator, inviting an artist to produce a new artwork that reflects their unique vision while drawing inspiration from the complexity and precision inherent to watchmaking, the watchmaker’s home in the Vallée de Joux and  the Manufacture’s continued commitment to supporting craft and creative innovation. Guest curator this time is Mónica Bello, who is Curator and Head of Arts at CERN, in Geneva, Switzerland. During her tenure, Bello has strengthened communications between the laboratory and international cultural organizations with her deep understanding of scientific and artistic collaborations. Semiconductor participated in CERN’s artist residency programme in November 2015, working closely with curator Mónica Bello. They have also worked within the NASA Space Sciences Laboratory.

We had the pleasure to get some insight directly from, Olivier Audemars, the vice-chairman of the board of directors at the company and great-grandson of co-founder Edward Auguste Piguet who kindly answered some of our questions.

Since 2013, Audemars Piguet has been Associate Partner of Art Basel – the world’s first premier modern and contemporary art show, held annually in Hong Kong, Basel, and Miami – How was this artistic partnership incepted and how has it evolved?

Artists and artisans have very tight common roots. A few centuries ago, they were one and the same, look at Leonardo Da Vinci for instance. Our journey into the world of contemporary art did not just begin five years; it was always in the background. However, we decided in 2013 to lay a strong enduring foundation, and Art Basel, with its worldwide reach, impeccable expertise, and with whom we share a common Swiss heritage, was the obvious choice. As the only watch manufacturer still in the hands of its founding families, we tend to think regarding generations, not quarterly results, and it was extremely important for us to ensure that this engagement with contemporary art would become a long-term and fruitful relationship.

With this in mind, we then announced the annual Audemars Piguet Art Commission in 2014. Since then, every year, we have selected an emerging or mid-career artist and curator to realize a new artwork which explores complexity, precision and any number of related fields, including contemporary creative practice, complex mechanics, technology, and science. After five years, we are still at the beginning of our journey, but I firmly believe that we have chosen the right path. The most rewarding aspect of Audemars Piguet’s art engagement has been the incredible exchanges that we’ve been privileged to have with artists. These encounters have challenged us to shift our vision not only of the art world but also of ourselves.

Throughout a selection of impeccably curated commissions, Audemars Piguet has been exploring the connections between art and technical mastery, with projects involving, technological and digital advancements, scientific knowledge and nature, but what do you expect from the audience that you want to engage with?

The three past Art Commissions have had a strong experiential impact, whereby they have allowed visitors to become participants in the work and to choreograph their experience freely. This has resulted, in the case of each commission, in an immersive experience where viewers have been able to sometimes act as performers, becoming a part of the piece as they interact with it. This is exactly what we are looking for. The best way to engage with people is to make sure they are part of our actions, and it allows us to share emotions, visions, and reach our world.

What has been the most complex (or challenging) commission and why?

Complexity is at the core of each Audemars Piguet Art Commission, and with such complexity comes challenges. We are lucky to have collaborated with fantastic artists over the years and have been able to learn a great deal from one another when dealing with such challenges. Our first annual commission was imagined by Swiss artist and composer Robin Meier and explored the natural phenomena of how fireflies found in remote parts of the world flash bioluminescent light in unison. This involved the use of live insects, which were certainly challenging to the, source! We worked alongside the Papiliorama Foundation, to ensure the fireflies were well tended to and cared for, as well as a select group of highly specialised scientific collaborators from the fields of genetic engineering, computer science, firefly breeding, cricket chorusing, bioacoustics and cognitive sciences, who all played a part in making this a reality. Additionally, our second annual commission by Chinese artist Sun Xun, was a complex production which required a great deal of technical accuracy, a vast team of assistants and the latest technologies.

For the 2018 commission, Audemars Piguet is collaborating with British artists Semiconductor to present HALO, a project curated by Monica Bello, Head of Art at CERN. What was the idea behind involving Mónica and CERN?

The process starts with the annual invitation of a guest curator. That curator is tasked with searching for emerging or mid-career artists whose work revolves around the themes of complexity and precision. The shortlisted artists are invited to our home in the Vallée de Joux to get a taste of who we are and where we come from. They then propose projects for the commission, and together we make these ideas come to life. Audemars Piguet can provide access to its resources, including its connections to specialist expertise, which the artist may need to create the work.

This year, we selected Mónica Bello to be guest curator. Her work at CERN is commendable, and she is an expert when it comes to the crossover between art and science which is something that is very important to us. We’re particularly excited to be supporting her too because she is the first in-house curator at CERN. Mónica then introduced us to UK artist-duo Semiconductor who took part in an arts residency program at CERN in 2015.

The textures of Art Basel Hong Kong 2019 by Lidia Ratoi 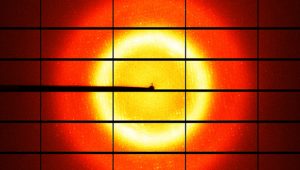