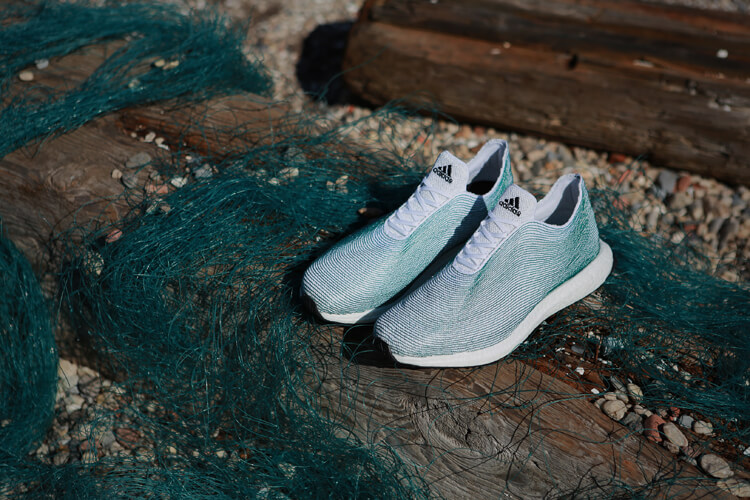 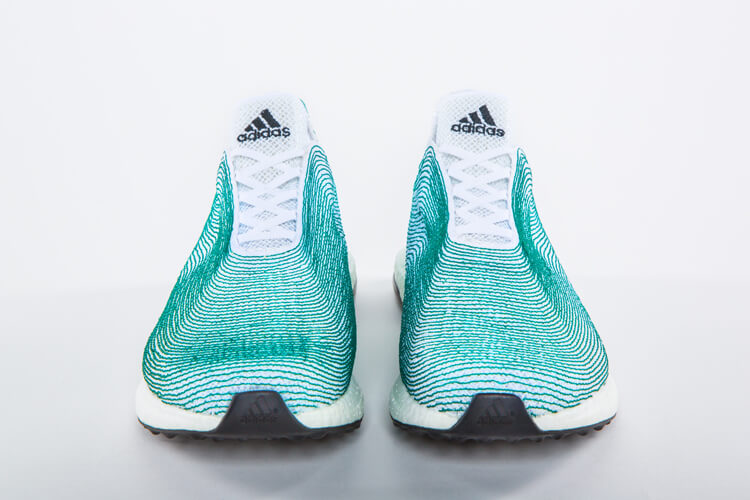 Massive hunting, fishing, agriculture, brought to scale by the industrial revolution and technological advances, have altered the environment and the atmosphere. Human beings have polluted the oceans and caused mass extinctions of plant and animal species to such an extent that some experts argue that the geological Holocene epoch is outdated and we are now in a human made epoch, the so-called Anthropocene.

Oceans, mountains, beaches and the earth in general ‘are becoming endangered due to manmade issues like pollution and plastic waste’ as James Carnes, adidas Group VP Strategy Creation & Lead for Open Source, points out. Following this, adidas Group, which seeks to be a sustainable company apart from a successful business, have been working for the past years in becoming more sustainable. Their efforts have been focused not only on the products they make (trainers and sports equipment) but also on the people they work with (employees and supply chain workers). But what does adidas Group do to achieve their goals and ambitions? Apart from empowering the quality of life of their employees and supply chain workers, adidas is also innovating in materials and processes (they work together with future innovators, material scientists, environmentalists, developers, engineers, and craftspeople) to use clean energy and waterless technologies to mitigate climate change.

Building on the concept of sustainability to make a global impact, adidas Group invited Parley for the Oceans, ‘an environmental organisation and collaboration network that raises awareness of the beauty and fragility of the oceans’ to join them. The adidas x Parley collaboration, under the division Futurecraft, have launched a new pair of running shoes, the UltraBOOST Uncaged as well as football jerseys for world-leading clubs Bayern Munich and Real Madrid. Both the shoes and the jerseys are made from water-based, environmentally friendly materials and with fabric obtained from plastic removed from the oceans in particular from coastal areas of the Maldives. However, the most impactful innovation was presented last November in New York at the BIOFABRICATE Summit, an annual conference that brings together critical thinking and design to challenge both what we know and how we use materials. adidas Group introduced their latest innovation: a new concept of trainers, adidas Futurecraft Biofabric, made of Biosteel™, a biopolymer fibre created using the same proteins that spiders use to make their silk that is fully biodegradable.

The significant influence of adidas Futurecraft does not lie in the technical innovation behind the products themselves, but instead in its conceptual framework. adidas Futurecraft blends art, design, science and humanity to create cutting-edge trainers and sports equipment in harmony with and respect for the planet and people. Because, as Carnes says, ‘through sport we have the power to change lives and for sport to the change lives it needs a space to exist.’ 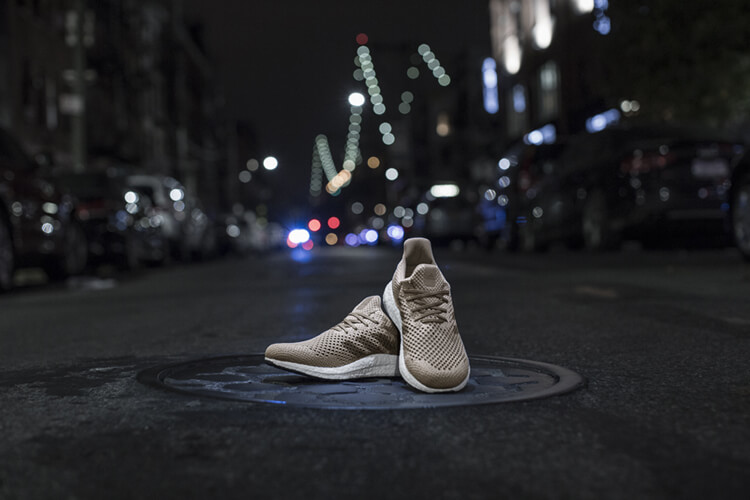 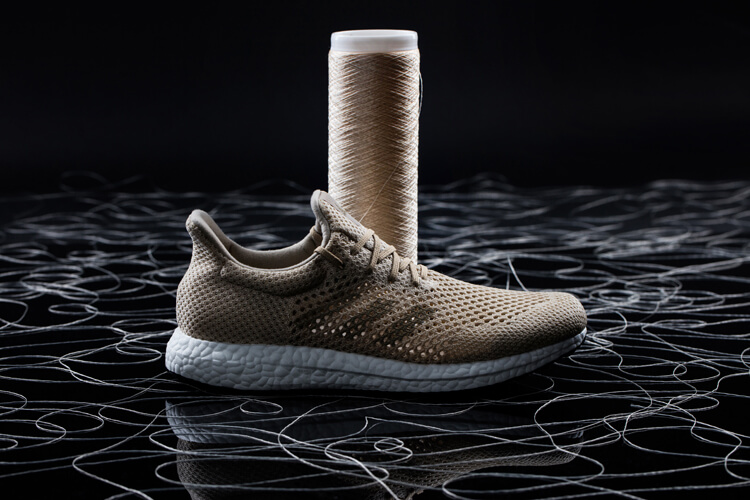 For those that are not familiar with the eco-innovation approach of adidas Group; how and when the collaboration with Parley for the Oceans came up?

At adidas, we believe that through sport we have the power to change lives. Following that logic, in order for sport to change lives it needs a space to exist, a field to play on, an ocean to surf, a mountain to climb… And these spaces are becoming endangered due to manmade issues like pollution and plastic waste.

For over 16 years, we’ve been leading in sustainability in how we operate, but we wanted to make a bigger impact where we could invite others to join in since we know we can’t do this alone. Seeing the oceans as one of the most important spaces for sport whose impact can be connected to the very air we breathe – we found the perfect partners in Parley to drive action further and clean up the oceans. In April 2015, adidas announced a partnership with Parley for the Oceans, an environmental organisation and collaboration network that raises awareness for the beauty and fragility of the oceans and implements comprehensive strategies to end their destruction.

As founding member, adidas supports Parley for the Oceans in its efforts in communication and education, research and development, direct action and eco innovation. The mutual focus is on Parley’s comprehensive Ocean Plastic Program, which is led by the Parley A.I.R. Strategy (Avoid, Intercept, and Redesign) to end ocean plastic pollution.

We launched the first adidas x Parley concept shoe at the United Nations in June 2015 and on November 4th, 2016, adidas unveiled the first commercially available performance products made with Parley Ocean Plastic in the form of football jerseys for world-leading clubs Bayern Munich and Real Madrid, as well as the first UltraBOOST Uncaged Parley running shoe.

During BIOFABRICATE conference 2017 adidas presented the Futurecraft Biofabric and revealed new concept trainers that are made from Biosteel™, a biopolymer fibre created using the same proteins that spiders use to make their silk. Could you tell us a little bit about the intellectual process behind Futurecraft Biofabric?

We’re currently living a paradox where our society is dependent on infinite economic growth on a planet with limited resources. The only clear way to remedy this is to disconnect growth from limited resources and to innovate responsibly by developing creative solutions that challenge the status quo. That is exactly the intention of Futurecraft Biofabric. The current industry standard defines materials as either natural or high performance – but not both. With biofabrics we challenge that standard by replicating the best of what nature has spent hundreds of millions of years perfecting. That is what makes our adidas Futurecraft Biofabric concept shoe stand out. It is the world’s first performance shoe made from Biosteel® fiber, which makes the upper completely biodegradable through a natural process without any compromise to performance, fit, or design.

With Parley we’ve started cleaning up the mess from the past but we need a design revolution to truly make a difference in our world. This is what adidas Futurecraft is all about.

Will be the next step putting the Futurecraft Biofabric into production? If so, when will be this prototypes ready for the market?

We’ve set an internal deadline for ourselves to have the first shoes made of Biosteel® available by end of next year. As we test and learn we will investigate what other possibilities there are within our wider product portfolio.

Apart from the use of materials with an eco-innovation approach; what direction do you see taking adidas Futurecraft into?

At adidas we have a unique approach to innovation that is more collaborative and holistic than that of our industry peers. Our creative design teams work hand-in-hand with our future innovators, material scientists, environmentalists, developers, engineers, and crafts people at the forefront of future trends and look into totally new processes and materials. Beyond product innovation they also look into the entire supply chain and how production processes can change the way we create – both for functional and aesthetic innovation.  They explore ways to use less fossil fuel, reduce pollution, minimize energy consumption, and integrate multiple steps into a singular process – across the full product lifecycle to create things that haven’t existed before. This holistic approach influences our creative direction, which we refer to as Futurecraft. Futurecraft thrives at the intersection of art, design, science and humanity. It is our journey across the paths of tradition and technology – crafting the look, feel and function of tomorrow.

What’s different about Futurecraft is that we expose our exploration as it happens, rather than waiting years to make it commercial.  We believe that sharing in our discoveries and inventions fuels and inspires us all to move forward and creates a healthy landscape for challenge. Expect to see more “firsts” from us in the coming years as part of our Futurecraft series.

BIOFABRICATE  is the annual summit for the emerging world of grown materials held in New York City. What impact do you think the conference is going to have on the future of materials?

Often science conferences can tend to focus on a very specific aspect of knowledge or research making them relatively inaccessible for wider audiences (like the exact formulation of collagen required to ferment proteins properly….). The power of the Biofabricate conference is that it is a platform to connect scientists, entrepreneurs, artists and designers to real life applications.  By helping to bring some of the most cutting-edge science into a design school and to people without any science background in a way that makes it accessible, Biofabricate also inspires and attracts the interest of investors, who are important players in making a material revolution happen faster. For any innovation to have real impact it takes investment to help bring it to market and scale fast.  For us this is also the place to find inspiration and meet potential new partners.

What technical invention do you think will have more social acceptance or impact in real life in a not-too-distant future?

Digital Innovation has been one of the driving forces in social change over the last two and a half decades globally, driving news and social media – unfortunately not always for the better.  There’s no reason to assume this will slow down, but I believe that there is a growing global consciousness about the need to innovate responsibly. Companies like Tesla have shown that high standards of human invention can coexist with sustainable solutions. This movement toward eco-innovation will overtake everything we do in the next ten years – mainly because we won’t have a choice. Eco-innovation will change the way we travel, how we work, how we consume resources as communities, and how we consume as individuals.

I think eco-innovation will be fairly acceptable for people as a society over the next decade.  Despite the few who want to deny the catastrophic rate of global climate change, it will have to be dealt with. This will likely lead to a deeper investment into Bionic Innovation, and that will stir a lot more controversy because it intersects with things we know less about like genetic research and biological engineering.

We will be able to create raw materials and complete products using DNA sequencing to determine the most accurate level of functionality and then see those same products return directly to the earth. That territory tends to make people nervous because it challenges our notions of privacy, law, and even religion….The idea of humans creating advanced technology from nature is provocative and will challenge us as a global culture. But bionic innovation will define our future.