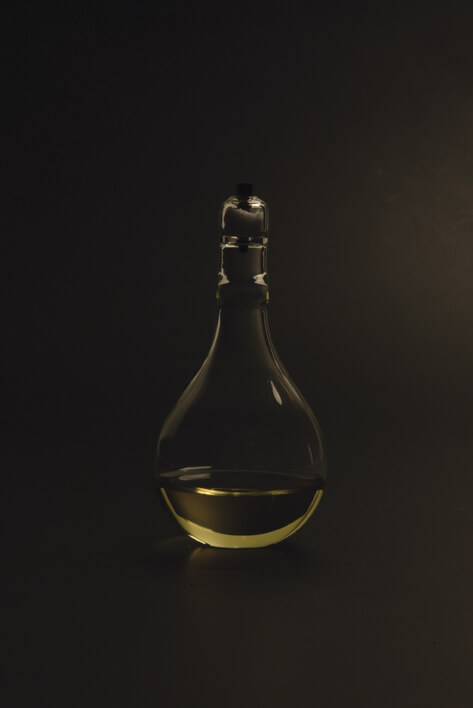 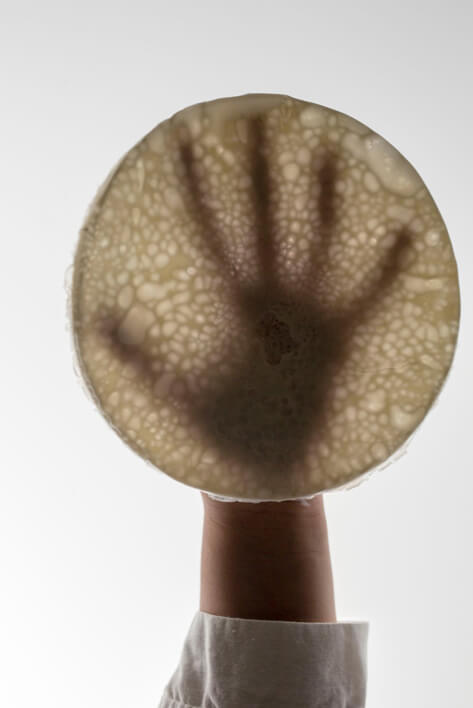 ‘Computing is not about computers any more. It is about living. Being digital is not just being a geek or Internet surfer or

mathematically savvy child, it’s actually a way of living and is going to impact absolutely everything’ [1].

When, in 1995, Nicholas Negroponte predicted that “being digital” would have us entering a realm increasingly unconstrained by the materiality of the world he was mostly right. Two decades later, our everyday lives are indeed even more suffused by computation and calculation. But materiality persists and continues to reassert itself. More and more, in recent t years, artists have been using technological and material advancements as their artistic means, either as a reflection and critique of our society or just as an aesthetic exercise to push boundaries forward. In this paper, we will be giving you an overview of some of the most exciting artists that blend both the digital and the material worlds for their creations.

Professor Nicholas Negroponte is an American-Greek Architect and angel investor of Wired Magazine, Skype, and Velti (among others) that co-founded the MIT Media lab in 1980 with Science Advisor to President John F. Kennedy, Jerome Wiesner. Since then the MIT Media Lab has been at the forefront of the most advanced discoveries and inventions to ‘create a better future’.  Their research fields of research are technology, sciences, multimedia, art, and design. Now in its fourth decade, the MIT Media Lab is working side by side with artists, researchers and pioneers ‘to invent—and reinvent—how humans experience and can be aided by, technology.’ In this sense, one of their latest creations is the 3D printed pasta, that shape-shifts when boiled on under heat. One fine example of how the digital and the material worlds collide for a functional purpose that completely infiltrates our everyday lives [2].

Remarkably, at the inaugural conference of the Being Material symposium hosted by the MIT Center for Art, Science & Technology, Nicholas Negroponte made one of his premonitory statements ‘Biotech is the new digital. That world is coming together [3].

But… What is happening now? Today programmable matter, 3D/4D printing, wearable technologies, or bio-inspired design has captured the attention of engineers, scientists, pioneers, designers and artists. We will explore meetings of the digital and material worlds such as biocomputing, digital couture, speculative and critical design and future materials showcasing recent developments in materials systems and design.

Biocomputing is defined as the design and construction of computers using biochemical components with an approach to programming that seeks to emulate or model biological processes. The work of Professor Eduardo R. Miranda and Óscar Martín represent the vanguard of researchers working in the field. Their artistic practices blur the relationship between musical creativity and computing technologies. Professor Eduardo R. Miranda is the Director of Interdisciplinary Centre for Computer Music Research (ICCMR) at Plymouth University and is behind the first biocomputer system designed for a musical application. Prof Miranda, together with his team at ICCMR, has built an interactive musical computer based on living organic components (Physarum polycephalum) cultured on a circuit board [4]. Sound artist and programmer Óscar Martín is working in the field of generative art. He became interested in biological systems and began to tackle simulating the complexity of living organisms. He develops his own tools to create real-time sounds in response to complex systems. His project bionic sound machina | no human composer is composed of a colony of Physarum polycephalum (visible to the naked eye or through a TV monitor), a computer where the genetic algorithms (software) and the sounds evolve (audible through speakers) while a number of electronic devices that read data, statements and responses of the colony of Physarum. Thus the sound and light stimuli, generate interaction and exchange of information between them. In the other direction of the feedback, the colony of Physarum is in charge to select and evaluate the evolution of the genetics algorithms of the software [5].

Digital Couture is the integration of the human body, clothing, and technology with a multidisciplinary approach to creation that goes beyond fashion. Iris van Herpen is a fashion designer with a deep interest in science and technology. Van Herpen is questioning the boundaries of fashion design by fusing the most traditional and radical materials with innovative garment construction methods such as 3D printing and laser-cutting. Her interest in creation goes beyond fashion as she has collaborated with artists and architects like Björk, Bart Hess, Neri Oxman or Philip Beesley, to name a few. Additionally,  van Herpen is an Artist in Residence at CERN (European Organization for Nuclear Research) and MIT. Between the Lines is her most recent collection and it was presented on January 2017 in Paris. In it van Herpen explores the imperfection of systems and structure in both the physical and digital worlds with an optical manipulation of the pieces based on hypnotic repetitive patterns [6]. Bart Hess is a Dutch material designer living and working in London. He is the mind behind the cover of Lady Gaga’s album Born this way for which he covered Lady Gaga with his slime material. The work of Bart Hess is instinctive, he takes advantage of the body as an artistic medium to expose the relationship with the materials such as latex, slime, foam and wax. He brings to life this relationship through the use of film, photography and installation. In this latest project, presented in 2014 at the Architecture Triennale in Lisbon, Digital Artifacts, Hess looks at the future of cyborg couture, where glitches play across our skin and transform the body into an architectural sculpture when the model is dipped into the puddle of hot wax [7]. 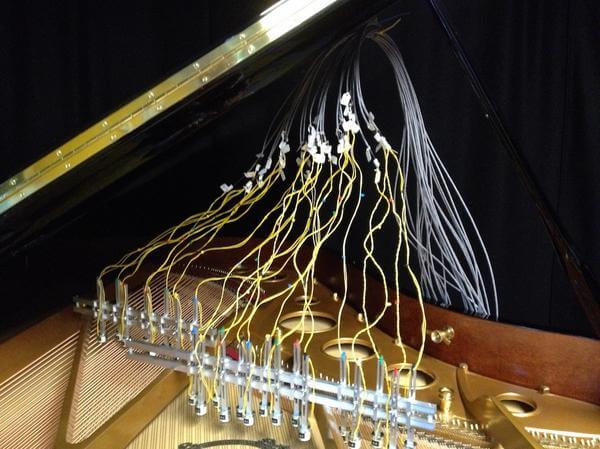 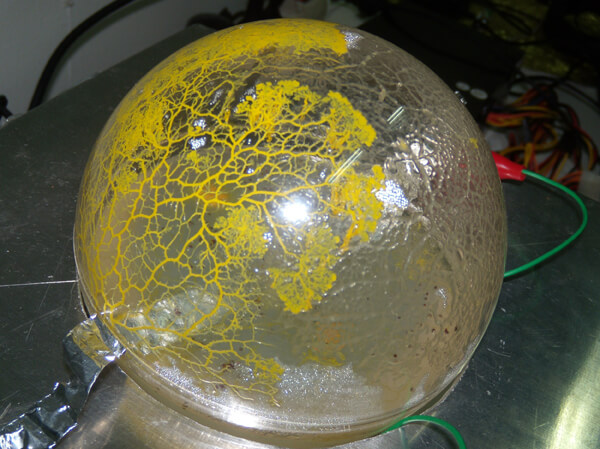 Speculative and Critical Design is the third topic we would like to talk about. Dunne & Raby, Professors of Design and Emerging Technology and Fellows of the Graduate Institute for Design Ethnography and Social Thought at The New School in New York, define Speculative Design as a kind of design that is used as a tool to create not only things but ideas. Design is a means of speculating about how things could be—to imagine possible futures [8]. Veronica Ranner holds a degree in Industrial Design and MA in Design Interactions (RCA, London) and a visiting Scientist at Tufts University in Boston (MA, USA). Veronica Ranner’s work lies at the heart of emerging (bio)technologies, bio-fabrication and biodesign and aims to understand and develop new roles for designers. Her research explores the domain of the bio-digital, where computational thinking meets biological matter. In her project Biophilia-Organ Crafting Ranner designs an alternative scenario, built around fears and facts of the patient when awaiting and receiving a donor heart that could shift our understanding of industrial and biotechnological manufacturing from ‘hardware’ to novel ‘wetware’, from digital to material. She uses a genetically modified Bombyx mori, or silkworm, that could weave biodegradable scaffolds for organs, tissues, biosensors and even products [9]. On the other hand, Thought Collider, are an art, design and collaborative research team founded by Mike Thompson (UK) and Susana Cámara Leret (ES) image futures scenarios to explore metabolic processes, bodies and spaces. They imagine future scenarios to explore metabolic processes, bodies and spaces. In their project Blood Lamp (2009) they explore biological energy processes like chemi and bioluminescence. Luminol is a chemical used in Police Forensics to determine the presence of blood at crime scenes. When placed in contact with blood, Luminol reacts with the iron found in haemoglobin emitting a stark blue light. Blood Lamp images a future scenario in which our own blood is used as a source of energy [10].

Sometimes speculative scenarios become a reality in the hands of the most talented researchers and designers pushing forward the boundaries of materiality. Future Materials, can be described as the convergence of sciences, technologies and design to create new materials and processes that contribute to explore and anticipate future needs. Neri Oxman, an American-Israeli architect and designer, has one of the most impressive bodies of work in the field. She leads the Mediated Matter group at MIT where she uses computational design, digital fabrication, materials science and synthetic biology to explore design possibilities. She has proposed “developing a material ecology with a holistic view, characterized by property gradients and multi-functionality – in contrast to assembly lines and a world made of parts”. Her work wants to pursue “a shift from consuming nature as a geological resource to editing it as a biological one”. Silk Pavilion (2013), a work that involves researching into the weaving properties of silkworms, Ocean Pavilion (2014) based in a crustacean-derived biopolymer, chitosan, combined with underwater robotic fabrication and Synthetic Apiary (2015), a research study on beehive building are three of their projects that involve fabrication by animals or by natural processes. In Silk Pavilion, the group explores ways of overcoming the existing limitations of additive manufacturing at architectural scales. By studying natural processes such as the way silkworms build their cocoons, scientists can develop ways of “printing” architectural structures with 3D printing technologies. The team motion-track the silkworms movements by attaching magnets to their heads. They then translated the motion-capture data into a 3D printer.[11] Jalila Essaïdi is another Dutch artist specialised in the fields of bio-based materials and biological arts. She won global recognition with Bulletproof Skin, a project that achieved bioengineered bulletproof human skin by reinforcing in vitro human skin with spider silk from genetically modified organisms. It poses a reflection of  the social, political, ethical and cultural issues surrounding safety in a world where new biotechnologies are becoming a central player. She is also president & founder of BioArt Laboratories foundation. In her latest project, Mestic®, she’s managed to obtain a Manure-derived Bioplastic. This work tries to override our natural aversion to manure, which is considered one of the most vile substances. Mestic® is all about transforming raw matter into future opportunities to generate new sustainable raw materials (bioplastics) that can be used by the manufacturing industry [12].

Here we have presented a few examples on how the tension between the digital and material redefine the way we understand what is happening around us. In times when a profound revision on how we live and how we understand and treat the natural world is needed, these are some of the immensely talented minds and their projects, which trying to push us forward to a better version of our world. When materials becomes programmable, when an integration of the human body and clothing with technology appear, when biological system become computers, new art forms emerge and they reinterpret our relationship as human beings with our environment and with technology. Either as a reflection and critique of our society and its practices or as an aesthetic exercise, they push the boundaries of creativity. It is also important to note that speculative works like designer Veronica Ranner’s and Alberto T Estévez’s genetic architecture projects aim to modify the matter from the inside, the genetic material, in a step beyond from future materials.

TH3MAX, and the aestheticization of pain