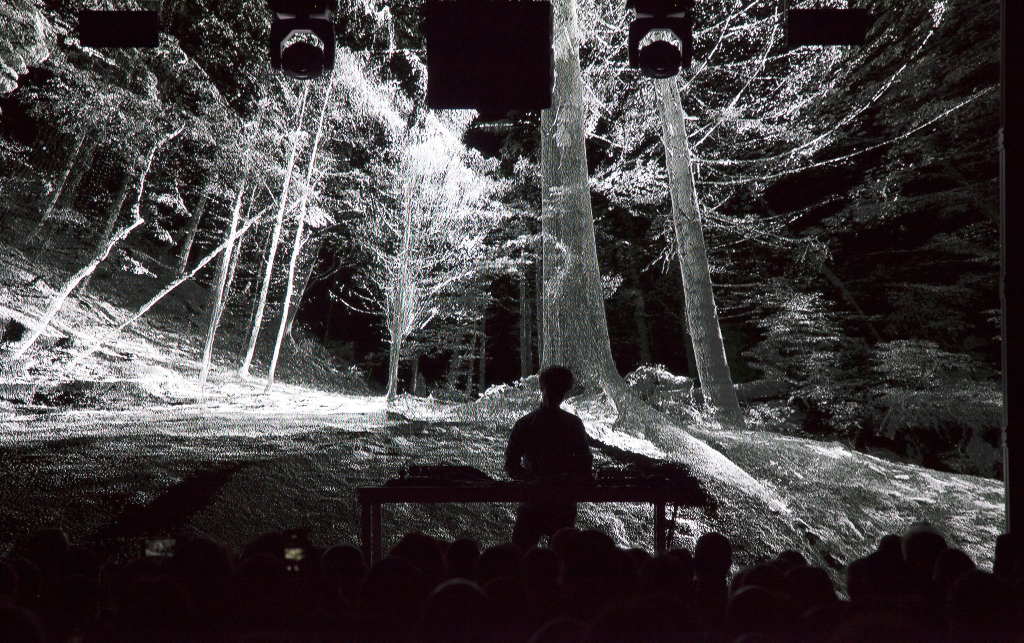 RYOICHI KUROKAWA, digitally colliding with all the senses

Synesthesia is a neurological phenomenon in which stimulation of one sensory or cognitive pathway leads to automatic, involuntary experiences in a second one. Synesthetes can hear colours, feel sounds and taste shapes. This phenomenon is a central element of Ryoichi Kurokawa’s work: sound, images, colour and motion work as one; they blend and intertwine making our senses lose touch with our personal experience of reality.

Kurokawa is a Japanese visual and sound artist that creates digital sculptures (or time-based sculptures) interpreting sound and image as a single unit, combining a refined technique and exquisite computer generated aesthetics. His digital artworks take on diverse forms such as audiovisual concerts, recordings and multi-screen, holographic and immersive installations. In an interrupted flow of sequences, his work throws the spectator into the depths of primary cognitive perceptions.

Nature and science have been a central starting point for Kurokawa’s creations. Since the early 2000s he has been developing what can be called a “digital naturalism”: his inspiration often comes from Japanese artists who produce their work within a close relationship with nature, its seasonality, forms, rhythms and structures. These references are already noticeable in his early works like Copy Nature (2003). Throughout the following years, his work sees an evolution towards more profound abstraction and figuration and in creating intricate pieces that play with our senses. It culminates in the appearance of his molecular life forms, like in the syn_ series (2011-2015), mol (2012), ground.alt (2014) and renature::bc-class #n (2015). Moving images seem to disappear like puffs of dust to then mutate into more intricate computer generated forms, exploring abstract patterns and sound at the same time.

For his latest creation, the impressive unfold, which was premiered at FACT Liverpool this May alongside constrained surface (2015), he focused on data generated by the study of the formation of stars. The data was produced by the satellites of the European Space Agency and NASA ( more specifically by the Herschel space telescope), and Vincent Minier,  astrophysicist and researcher at CEA-IRFU, supervised the project. Unfold is a piece you experience with almost all your senses, rather than just seeing it. The work also makes us reflect on research and scientific discovery and to question the representation and publication of large quantities of data that we are continuously generating.

Kurokawa’s immersive installations and performances have an emphasis on the sensorial and the experiential. Filled with geometrical shapes, pixels and bright colours, landscapes and natural forms, alongside audio textures and field recording sounds, they transport us to the depths of his universe, based on an audiovisual language where complexity and simplicity alternate, mutate and combine in a captivating multisensorial blend

Your work finds inspiration in nature and expands from installations, sound recordings and concert pieces. When and how did the fascination with them come about?

When I find beautiful and exciting phenomena, structures, patterns or textures in nature, I conceive how to reconstruct and compose them and am anxious to research on them. So this might be the trigger to new pieces. Some of them are translated directly into artworks, but most of them are stocked as one of the seeds for a new idea. Nature or physical law continually inspires me a lot in the process of constructing the idea.
That concept to rebuild nature to make a new order is one on my main theme on creating artwork from early in my career. For my works, the relationship between order and disorder plays an important role, and this is the basic element of my works.

Your work is mostly based on synesthetic experiences, bringing about new feelings in the audience by stimulating simultaneously sight, hearing and even physical movement. What do you expect from the viewer that interact with your installations?

I’m avoiding to give a guideline to viewers, and I don’t expect anything specific, but it’s a great pleasure my works could let viewers think through experience or could be the trigger for them to do something.

For Unfold, your latest project, you worked closely with an astrophysicist, and you had to deal with very complex data analysis and digital modelling that would interpret and visualise the evolution of stars. What were the biggest challenges you faced in the development of this project?

For this piece, I wanted to avoid conventional scientific output such as visualisation of astrophysical data that you see in general. The deepest contemplation was how to reconstruct data and scientific fact. Although we have never do anything that goes against astrophysical fact, we deformed some of those data. And also we employed scientifically valueless output as those are expressive as data even if those are meaningless depiction for scientists. Misuse of data or tools has always fascinated me than correct usage in the original field.

I don’t fix it as there are many possibilities or maybe don’t consider it. I just keep creating each piece as carefully as possible.