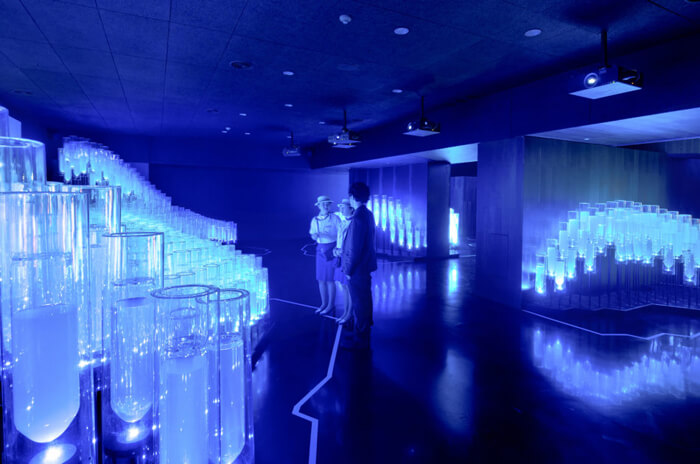 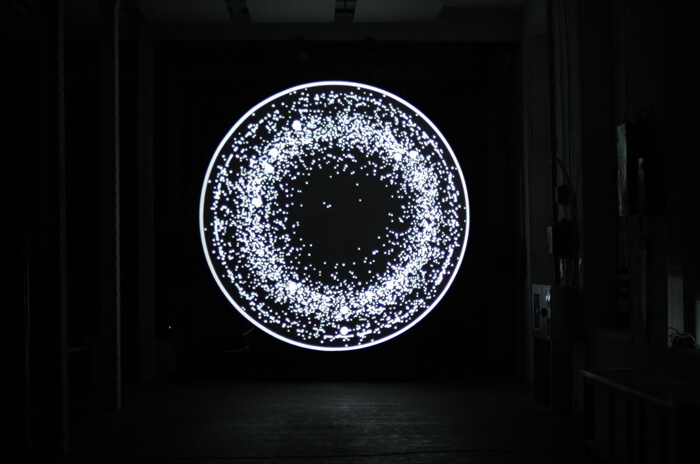 Barcelona has always been a place for design and experimentation. Digital design and visual arts have flourished in the last 20 years, but more recently there has been another surge with new studios and individual creatives arriving on the scene at an incredible rate. The prevalence of Barcelona-based international publications like Apartamento, schools like Elisava and IED, production companies like Canada and festivals like Sonar, OFFF and the more recent MIRA, have played an essential role in the development of artistic innovation and technology in the city.

One of these creatives contributing to this development is Aleix Fernandez Curell, founder and creative director of the audiovisual production studio Onionlab. Established in 2005, Onionlab is a multidisciplinary studio focused on interactive products and experiences, using projection mapping, virtual reality, motion design movies and audiovisual shows. In Onionlab, Aleix blends his passion for technology, design and art bringing about aesthetic details and technical innovation. Aleix is also co-founder and director of the music social community Playmoss, a project they were exhibiting for another year at Sonar +D last June.

Going back to Aleix’s work with Onionlab, he creates illusions with lights, projections and lasers; a digital take on contemporary light masters such as Olafur Eliasson and James Turrell. In his mapping works the projections transform static surface into something dynamic and full of life. The series Evolució (Evolution) (2013), which premiered at the Geneva Mapping Festival, is a piece that revolves around graphic and sound abstraction around evolution: a transformation, construction, and alteration of reality through time. The studio was also commissioned to produce different audiovisual pieces for the Spanish Pavilion in the World Expo of Korea in Yesu (2012): Deep ocean took inspiration on scientific expeditions promoted by the Spanish government in the 18th century presenting life in the deepest parts of our oceans. Biology was also the inspiration for a piece produced for the Ricardo Bofill Taller de Arquitectura and exhibited at the 2014 Venice Biennale. The piece, with name Towards Biology, focused on ecology as well as on social and technological aspects.

WordsOfData (2015) is another of Aleix’s projects- this a personal one-, comprising a series of medium format pieces that, focuses on the contrast between an overload of information and the void produced by new technologies. Using mapping techniques he transforms data obtained from twitter depicting the words in messages in geometric figures.

More recently Onionlab has been exploring new territories with Virtual Reality with projects such as Sunmachine (2016) which is a piece proposes an imaginary trip around five worlds and that he presented last his last October in London. Aleix came to participate in the second event in the Nocturnal City series [1], this one exploring the London-Barcelona nightlife interplay.

Seeing his creations at the forefront of the latest technological advances in digital visual arts and design, we are sure we’ll be hearing much more about Aleix’s in the coming future.

[1] Nocturnal city is a series of events curated by Estela Oliva, who tries to open debate and reflection on new spaces and platforms, connecting the two cities through innovation in their scenes, questioning how club culture could be made more inclusive, and how technological advances might help or hinder its evolution.

Your work is at the intersection of art, design and technology. Where and how did the fascination with them come about?

It is an overlapping of layers that you add to your life for varying reasons. I think that my curiosity for art comes from my mother who is an artist and an art teacher. Technology has always interested me, but I suppose that I learnt what I needed to know through studying multimedia engineering, knowledge, that I later applied mainly to creative pieces and projects but with a clear objective, which therefore resulted in pieces designed to fulfil a function.

They are pieces that are produced in my studio Onionlab and they include mappings on facades, VR experiences and contents for exhibitions. My purely artistic facet comes from my necessity to work on projects where there is no clear and well-defined objective.

In Onionlab you “create audiovisual content and interactive experiences for companies that want to be related to technology, design and art”. Which has been the project you have enjoyed the most? And the most challenging one?

It is very complicated to answer this question, but maybe the hardest projects which have also been the most rewarding ones are the mapping that we did for the Mapping festival and which was projected onto the Geneva Museum of Art and History: “Evolució”, the contents that we made for the Spanish Pavillion in the World Expo of Korea and the piece  “Towards Biology” that we produced with and for the Ricardo Bofill Taller de Arquitectura for the Venice Biennale.

The most difficult of these three was definitely the second, for its complexity and the dynamics that you find in the mounting of a piece at a universal expo.

WordsOfData is a series of medium format pieces that, with the use of mapping projection techniques, focuses on the contrast between an overload of information (Twitter data more precisely in this piece) and the void produced by new technologies. Could you tell us a bit about the intellectual process behind it?

In WordsOfData I want to reflect the overload of information that we get from social networks and how this ends up affecting us in a negative way, through a lack of concentration, a lack of confidence, a sense of emptiness and stress. The idea of #wordsofdata is to take all this information and use it to generate the exact opposite, audio-visual structures that are serene, repetitive, hypnotic and allow us to escape and feel calm and content for a few minutes.

In order to do this, I start with a concept or tag, for example, #death and collect thousands of Tweets that I can use as material to build on.  Specifically for the piece “#death” for example, I represent each #death Tweet with a dot and I modify its intensity or size according to the number of re-tweets or the number of followers that its owner has. Finally, I apply this in movement on a surface or in a way that for me symbolises the concept “Death” .

Honestly, I would like to continue moving around in a loop for a long time, tackling and researching the same concept in different mediums, formats and techniques. Research and experimentation are for me the most beautiful features of art. Although one of the things that will influence that experimentation is without a doubt technology, the eternal ally.

Thinking like an adult. Playing and experimenting without fear or prejudices is very good for creativity.