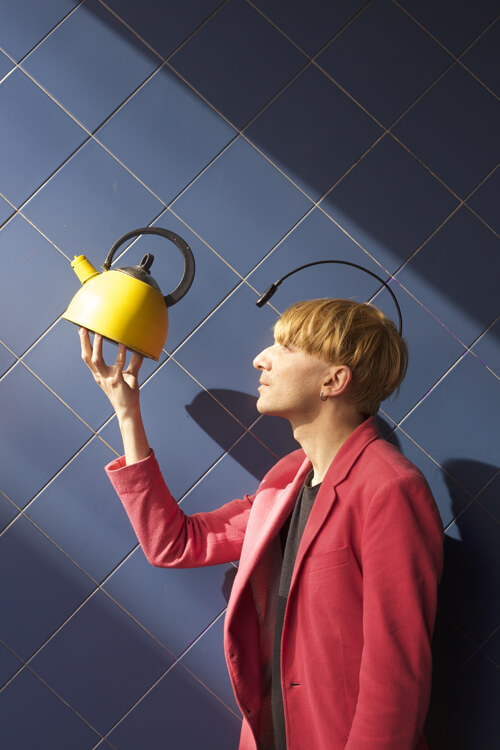 What happens if  we alter the traditional methods of sensing by adding an extra sense? What changes if we extend our perception and abilities by enhancing our senses? In her A Cyborg Manifesto, written in the early eighties, Donna Haraway defined cyborg as  ‘A cybernetic organism, a hybrid of machine and organism, a creature of social reality as well as a creature of fiction.’[1]

Neil Harbisson, cyborg artist, co-founder of The Cyborg Foundation and Cyborg Nest, ‘became technology’ and therefore cyborg more than a decade ago when he implanted an antenna in his skull that allows him to hear colours. Born with achromatopsia, a rare condition of colour blindness that makes him see the world in a grey scale, the antenna, which Harbisson calls ‘eyeborg’ represents the perfect cybernetic u nion between human and technology. He even wears it while showering.  For Harbisson, the son of a Catalan mother and an Irish father, his identity as a  cyborg is official —  the antenna  is included in his British passport.

Harbisson’s cyborg art is mainly focused on creating music and portraits through the new sense. In Piano Concerto No. 1, he painted a piano with different colour paint and then the antenna played the frequencies of the colours while he created portraits in Sound Portraits by listening to the colour of their faces. Another appealing artwork is The Human Colour Wheel, a colour wheel based on the light of the human skins.

Apart from his artistic work Neil Harbisson co-founded together with cyborg choreographer Moon Ribas The Cyborg Foundation in 2010. Its aims are to help people to become a cyborg by giving them the tools and the information to achieve their goal. More recently, in 2016, Harbisson and Ribas launched Cyborg Nest. As Neil says, Cyborg Nest is a company that ‘[offers] senses for people. (…) so people can extend their senses by applying or incorporating new sensory organs in their body.’

Harbisson’s last but not least project is something different. It is an exploration of the fashion industry with the launch of a brand-new line of fashion for cyborgs. Under the name of H+C, and in collaboration with fashion designer Francesc Cardona, the line is a series of post wearable garments adapted for cyborgs.

Humans sense the world in different ways through their ‘conventional’ methods of perception: hearing, sight, touch, smell and taste. When Harbisson added his new sense, he taught us that the senses are not five anymore. He showed us new perceptions of reality in which colours are defined by a correlation of frequencies of the wavelengths. In New Theory of Vision, published in 1709, Irish philosopher George Berkeley explores ‘the manner wherein we perceive by sight the distance, magnitude, and situation of objects.’ This goes to show that  our understanding of the world depends on the way we sense it. How would the world appear to us when we sense it in a broad and different new ways? Exploring new ways of communicating beyond our senses and languages of sounds and signs will allow us to comprehend the world in broader dimensions. The world would not be perceived any longer in three dimensions. 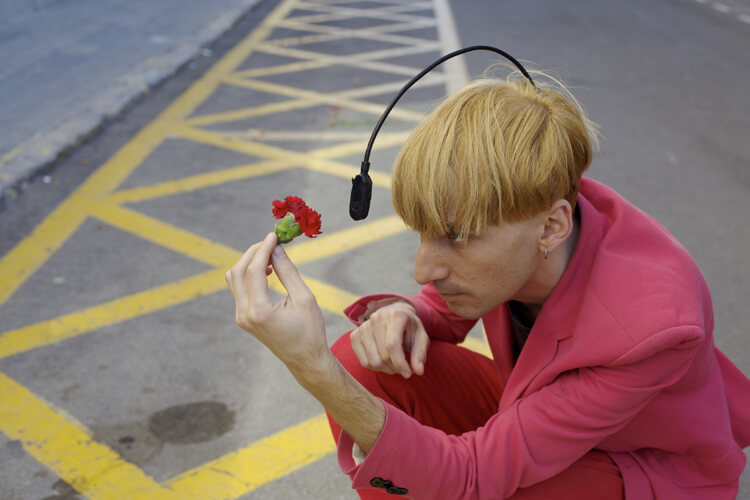 For those that are not familiar with your work as cyborg artist; Could you tell us a little bit about the intellectual process behind Cyborg Nest?

Then Cyborg Nest is a company that it’s offering senses for people. If someone wants to have a new sense they can contact Cyborg Nest and we will either create the sense and offer to other people as well, so people can extend their senses by applying or incorporating new sensory organs in their body.

Cyborg Nest is now offering, for example, North sense. It can be implanted in the middle of your body and whenever your face north you feel the vibrations, so if you have this for several months or years it should become to a new sense that there be like any other sense, it would give you a sense of orientation for example.

Skin is a body part, so if we start seeing technology as a new layer of our bodies that would be good because it will be a transition to merging biologically which might be more profound and more wearable permanent, so I think it will profound changes to the way we perceive reality.

Wearable technologies have the ability to communicate with their owners and by doing so, the boundaries between physical and digital are blurring. How people respond to multiple stimuli in a digital environment beyond the touch of a screen or button is one of the questions to answer in this 21st century in which people live in a hyper-connected society. In which ways do you think are interactive and digital technologies changing or affecting human behaviour?

How do you imagine the future of the human species?

Then after that in the late of this century, we’ll stop using cybernetics, and we’ll start using like DNA and 3D printers that we’ll allow us to 3D print new body parts, we’ll be able to have new sensory organs. Also, we’ll be able to modify ourselves genetically so we can have new senses, so  instead of using chips, cybernetics, metal and wires we’ll start using our DNA, it will be 100% organic. That’s a post-cyborg reason: there will be 3D printed new body parts and also will be genetically modifying our senses.

What are the physical and psychological challenges when you add a new sense to your body (or when you become a cyborg)?

But with the adaptation to the new sense each person will need their own time of adaptation, there’s no a standard because each brain is unique, each brain will react differently. In my case it took five weeks for the headaches to go away and five months to really feel that my brain had accepted the new sense. So, in totally was five months.

(This interview was recorded last August via Skype)