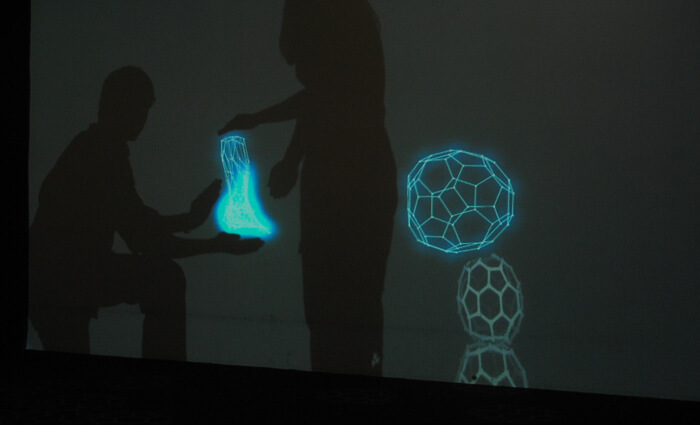 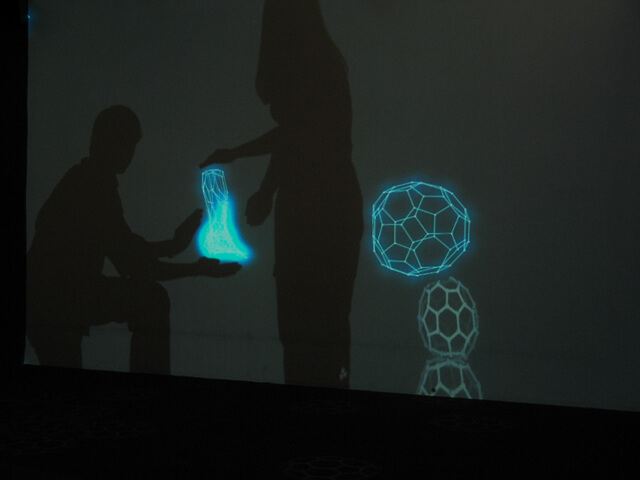 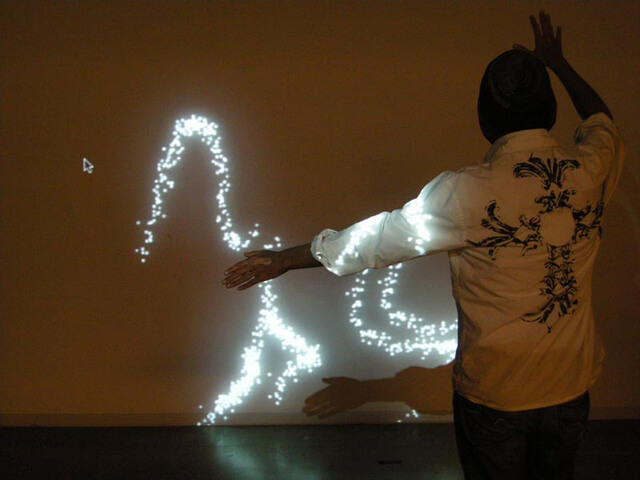 Leading artist Victoria Vesna, Ph.D., is Director of UCLA’s Art|Sci Center and Professor at the UCLA Department of Design | Media Arts and one of the most talented artists working in between technology, art and scientific innovation. Her interactive installations created —most of them— in collaboration with composers, nano-scientists, neuroscientists and evolutionary biologists are at the forefront of the science-influenced art movement.

Back in the eighties Vesna directed a pioneering film using Cosmic Rays, Unfolding the Pyramid Secrets which led later in the nineties, to develop an interactive CD-Rom project with Stephen Hawking, Life in the Universe. But the turning point of her work was her collaboration with James Gimzewski —the first scientist Vesna teamed with— when she really blurred boundaries between art, science and technology.

When I came through Vesna’s work the project that especially caught my attention was HOX Zodiac (2009-present). Developed together with neuroscientist Siddharth Ramakrishnan, is an immersive and participatory performance in which the ritual of a dinner table is the starting point to share ideas about the Hox genes. One of the most fascinating things when studying embryogenesis is how a single cell zygote becomes an adult organism. There are a group of genes —Hox genes—that regulate the embryonic development and evolutionary conservation. Hox genes are present in all animals so understanding and deciphering how they are expressed in every species is one of the challenges of the scientific research and HOX Zodiac, a metaphorical interpretation in which Vesna involves the audience, is an open door to interpret these genes and how all animals are interconnected.

Some of the cutting edge projects in which Victoria Vesna is currently working on are  Blue Morph (2007- present), an interactive installation that, by documenting the metamorphosis of a caterpillar into a butterfly, examines and explains how nanotechnology is changing our perception of life. And Bird Song Diamont (2012-present) a personal project led by evolutionary biologist Charles Taylor together with physicist Takashi Ikegami (Tokio University) that goes beyond birds communication, Bird Song Diamont is an exploration about how some species communicate with each other.

Victoria Vesna’s work is at the vanguard of the intersection of art, science and technology, it opens a door to understand how humans interact with new technologies and on the other hand; how in a hyper connected world technologies are affecting collective behavior. 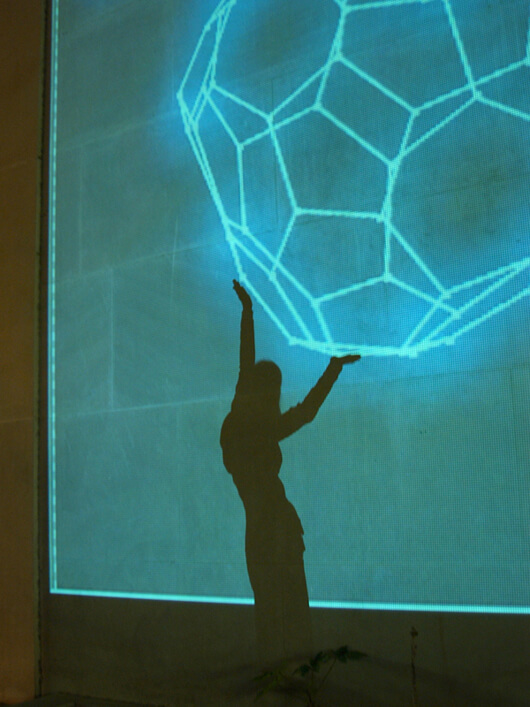 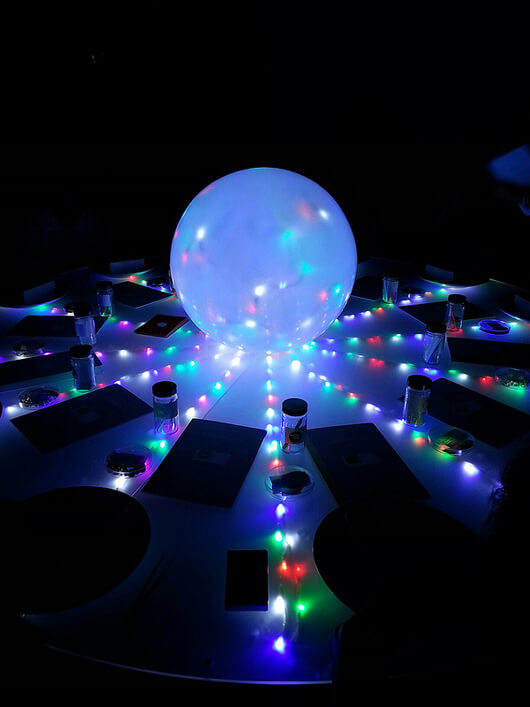 Your interactive installations connect art, science and technology, what drew you into working in the intersection of them?

Well, my journey starts with terrible math and science teachers so early on I turned to art schools where I got absolutely zero education in science and technology. But, while growing up in NY in the 70’s, through my father’s obsession with Nikola Tesla, I was absorbing a lot of scientific concepts through osmosis. In retrospect, I think that this was the seed that kept growing inside me and attracting me to explore the deeper aspects of the natural world. Later, I was trained as a painter at the Academy if Fine Arts in Belgrade in the classical Beaux Arts fashion and quickly became bored, although I have to admit that the deep studies in anatomy and drawing are an important skill I lean on often. For awhile I dropped out, went back in NYC and formed a band (Crazy Hearts).

I consider this period as my self-directed DIY school in media arts – I learned the fundamentals of working collaboratively in a group and started to play with video, sound, light and performance… But after a few years, I hit a dead-end with the music world, went back to art school and soon after graduating by some miracle landed in 1986 Venice Biennale Aperto section (international emerging young artists). Believe it or not, the title of this Biennale (thirty years ago!) was Art & Science! Next to me was Brian Eno showing his light boxes and through him I met his Professor – Roy Ascott who was the curator of a group show (Planetary Network). All this blew my mind – I could not even compute what I was witnessing but unconsciously registered this extraordinary happening and I shifted my understanding of contemporary art – it is not what we are taught in art schools or see in the museums (with rare exceptions in both instances) and this is true even today.

Two other pivotal events moved me further into this direction – I directed a documentary Unfolding the Pyramid Secrets using Cosmic Rays that received an award for best scientific documentary film (1988) which later led to an opportunity to develop Life in the Universe, a CD-ROM project with Stephen Hawking (1997). I was discovering more about science and understanding the scientific methodology and process which made communication and work with scientists easier. Soon after, I started my PhD studies with Roy Ascott and during this time developed Bodies INC which was the beginning of working in a way that combined all that I was learning up to that point. But all this was happening in separate worlds until I started working with nanoscientist James Gimzewski who was the first scientist I collaborated with on an artwork where we were equally involved and truly blurred the lines of art, science and technology.

NANO and HOX Zodiac are at the forefront of the intersection of art and science. Nanotechnology, genetics, interactive technology and human behaviour are some of their main focus; could you tell us a little bit about the intellectual process behind these projects? What do you expect from the viewer that interact with your installations?

NANO is actually a series of projects that was developed together with Gimzewski. Zero @ wavefunction or Zerowave was a response to my fascination with the buckyball which I learned about through my studies of Buckminster Fuller’s work. Quantum Tunnel was inspired by his work with the Scanning Tunneling Microscope (STM) and for the NanoMandala we collaborated with the Tibetan monks from the Gaden Shartse monastery. All these installations emerged from deep philosophical discussions and our mutual interest in Buddhist ideas of empty space that seem to best explain working in the molecular space. Later we worked together on the Blue Morph performative installation that involved the sounds of metamorphosis of a chrysalis into a butterfly. Sound became very important in creating immersive spaces that attempt to take the participant into a different way of experiencing reality. This is at the core of our collaboration.

Hox Zodiac on the other hand is an attempt to unplug and exchange ideas about our relationship to animals as we share and ingest food together at a dinner table. I have been developing this piece with neuroscientist Siddharth Ramakrishnan for the past five years and now it is finally in the completion stage. I was so moved when he told me about his fascination with the Hox gene that determines how we are formed to be the shape we are and have two eyes, two legs and that every creature shares this — from a snail to an elephant. Thinking about this one gene, evokes wonder at the engine of creation and the amazing diversity of the animal kingdom we are part of. Now that these genes can be manipulated, we can start imagining chimeras coming to life and one wonders if the mythical animals were blueprints for what we will be manifesting in the near future.

This work started as a technological interactive piece but through audience interaction evolved into a performative dinner piece. At first I was a bit unsure how to create a work that includes all creatures but this problem was solved with an invitation to an exhibition in Shanghai – I suddenly realized that the Chinese zodiac offers the perfect vehicle! So now we have designed dinner parties and participants sit at the table as their assigned animal sign and together we expand the idea of zodiac signs by looking at the animals we eat, the scientific experiments conducted on them, the myths, as well the influence of China and the hybridity of cultures through food we ingest.

At this point there are many projects that have been brewing coming up at the same time and I am forming an Art Sci collective in order to tackle them in parallel. For a long time I worked as a leader of a small band but with the last project (Bird Song Diamond) [birdsongdiamond.com] that I developed with evolutionary biologist Chuck Taylor, physicist Takashi Ikegami and engineer Hiroo Iwata, I felt more like an orchestra conductor.

There were so many people involved, from so many different disciplines that had to be directed aesthetically and conceptually and this was an exhilarating experience for me. After thirty years of working with scientists and teams of people, I am ready to envision more of these kinds of complex large-scale projects and I think the world is ready for it too. I like working with extremes – either fully technological and large scale collaborative or completely unplugged eating with friends.

Wearable technologies have the ability to communicate with their owners and by doing so the boundaries between physical and digital are blurring. How people respond to multiple stimuli in a digital environment beyond the touch of a screen or button is one of questions to answer in this 21st century in which people live in a hyper connected society. In which ways do you think are interactive and digital technologies changing or affecting human behaviour?

There is no question that we are in the middle of a paradigm shift and it is not an easy one. Think of the last paradigm shift only a hundred years ago in 1916 and then move the calendar a hundred years to 2016. It is phenomenal how much has changed in such a short time and we may not even be able to imagine how the world will be 2066.

One thing is for sure – we are becoming aware of our collective (un)consciousness, the idea of the body and the individual is radically changing and our senses are being expanded. Are animals becoming more intelligent or are we becoming more aware of their intelligence or are we collectively changing together with them? We know that many species — including us, are endangered if we do not change our ways to a more holistic way of being and this is a great challenge to humanity – whether we make it or not is unclear.

Boundaries between the physical and digital are in the mind – they exist if we deem them to be separate. But once the Pandora’s box is open, we have to deal with a completely different reality and this takes some adjusting. Resistance only creates destructive events and this is what we are witnessing.

What technical invention do you think will have more social acceptance or impact in real life in a no-too-distant future?

It is not necessarily one technical invention but the many changes happening at the same time. One could name all the technologies we are already familiar with and analyze what it means for us — AI, AL, drones, neuroscience, bio, nanotech and so on. But, what we need to learn to accept is that the combination of all is really a reflection, projection and outward manifestation of our own powers that lay dormant.

It is only hundreds of years that we have been developing computer technologies and through the use of them we are seeing the wonder of our own complex and intricate technology that has been in the works for millions of years. Ultimately, we will learn that we can do everything we imagine without any computers – they are merely crutches until we figure out the power of our own mind and body. All the implants, bio-engineering and manipulation is still a materialistic approach to healing and transforming ourselves and our reality.

What is the chief challenge of creativity or creation?