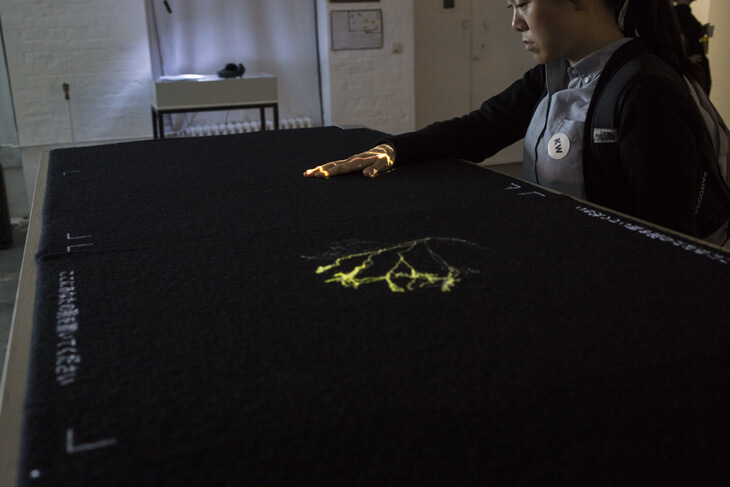 Generative art is the kind of art created with the use of a (generally) non-human autonomous system which can independently determine features of the art piece that would require decisions made by the artist. “Generative art” is used to refer to algorithmic or computer generated artwork determined by algorithms. But in the hands of Theresa Schubert, a German post-media artist and researcher at the intersection of art, biology and technology, the generative systems are of biological origin.

Schubert’s work has its roots in a posthumanist view of existence. A view where humans lose their preeminent position and concepts like creativity and interspecies communication are challenged and examined. Her practice involves various media and transdisciplinary methods which explore, from a poetic and aesthetic perspective, natural phenomena like growth and development.

Another central aspect of Theresa’s work is skin – or membranes in an analogy.  Skin, the largest organ in the human body, marks the frontier between the inner and the outer. It is able to separate different matter states and does so in a way similar to  membranes in single cells. But skin or membranes are more than a just an inert surface; they can be interfaces that connect and communicate responding to environmental changes.

This conceptual framework elegantly unfurls into two of her mains projects:  bodymetries – mapping the human body through amorphous intelligence (2013) and Growing Geometries I – tattooing mushrooms (2014), where growth and development of simple organisms like the slime mould Physarum Polycephalum and fungi are  means for metaphysical reflection.

Bodymetries is a generative, interactive setup where  spectators interact with a computer simulation that scans features of their arm skin which becomes the growing surface for a network of slime mould. The virtual organism reacts to environmental stimuli from the human skin and solves geometrical calculations. The piece explores possible scenarios for mapping the human body using the spatial, computational logic of the Physarum Polycephalum. In Geometries I, recalling  human skin tattoos that change and evolve with over time, (permanently imprinted images on membranes), Theresa  tattoos geometrical shapes in growing fungi. These shapes grow and mutate as the fungi develop, assimilating natural processes to generating new forms and how biological processes can be used to create art.

Theresa and collaborator Andrew Adamatzky are the editors of Experiencing the Unconventional, Science in Art  (World Scientific Publishing, 2015). The book presents a  thought-provoking selection of artists, projects and interviews and it’s an exciting read for anyone who wants to delve deeper in fields like digital media art combined with molecular biology, computer sciences, chemistry, physics, robotics and much more.

Recalling works from media theorists like Marshall McLuhan and Jens Hauser to philosopher duo Deleuze and Guattari, the systems and means for Theresa’s Schubert’s work inherently point towards experimentation, principles of self-organization and liminality. A step further into unfolding human existence in relation to other life forms. 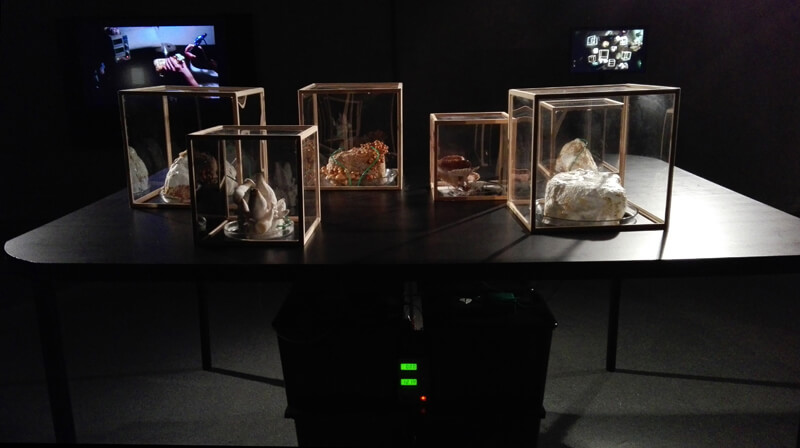 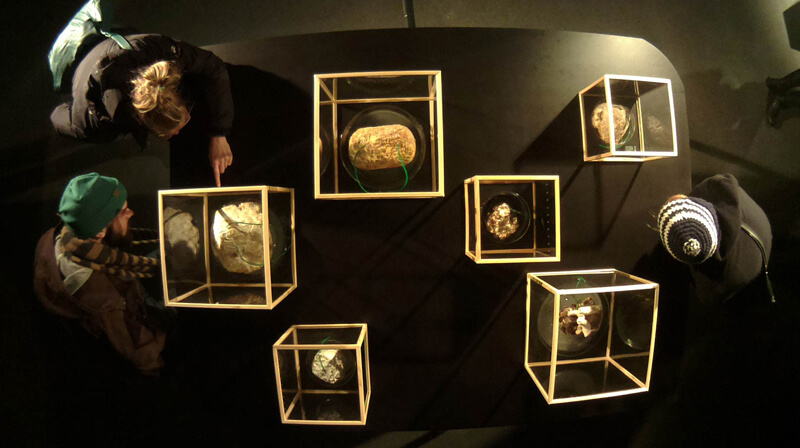 You are a visual and new-media artist, when and how did the fascination with biological systems come about?

I was already curious about biology as a child. When I was five years old, I would collect snails from the meadows and bring them home where I would keep them on lettuce leaves inside shoe boxes. A couple of years later they were replaced by ants. My parents had a big garden, so there was a lot of space to get in touch with the living.

Apart from my personal experience, I believe that a preoccupation with nature is something inherently human. We all know the feeling of relaxation when looking into an open plane of green grass and trees – being in nature makes us feel good. This sense is heightened when living in a big city such as Berlin – you start acknowledge these sensations more and more.

After university I spent a few years mainly making artwork with computers. I then decided I needed something more ‘hands-on’. At that time I was working for Ars Electronica and got to use the Biolab that is incorporated in the museum. That was my more formal initiation to biological systems and the methods and technologies of lab work. I also had the chance to meet Joe Davis and George Church there (amongst other inspiring people). Ars Electronica was an overall great breeding ground for my first experiments.

We find your project Bodymetries really inspiring and innovative, how did you come up with the idea?

This artistic research project was rooted in a very personal question. I wanted to find out what the shortest route would be to connect the moles on my body. Through genetic heritage and environmental factors I developed a greater number of melanin spots on my skin. I wanted to explore this bodily phenomena in terms of genesis and visualisation of its distribution. While researching these topics, I came across Physarum polycephalum (slime mold) – a living organism known best for its decentralised intelligence and ability to construct optimal spatial networks.

The initial idea was to use this organism to create a visualisation instead of plain mathematics. I had originally conceptualized a performance where chemo-attractants would be applied to my moles and the slime mold would grow on my skin and make the connections. For various reasons (health, time, temperature) this was not possible so instead, I opted to make a simulation of the organism. Michael Markert and Moritz Dreßler teamed up with me and together we developed ‘Bodymetries’ into a generative multi-user installation.

What are the biggest challenges you face for the development of your projects?

Finding financial support and bureaucracy. Plus the fact, that when working with living organisms, they sometimes don’t do what you hoped for…

Apart from an artist, you are a researcher as well, what are your aims working in between science and art from an academic perspective?

I wouldn’t say it’s my aim but a byproduct: I would like to show that it is possible to be an artist and also to navigate comfortably across the field of science. I don’t argue that art and science are the same thing but, the wall dividing these fields has become unnecessarily high. Recently many great collaborations between art and science have evolved and further, some institutional frameworks grown to support them (to mention the BAD Award, FEAT residency etc.). I would like to see more of this – especially in educational institutions as artistic visions and critiques on how science will change our society in future are important.

Physarum polycephalum is a slime mould that eats fungal spores and bacteria, how do you feed your creativity?

I don’t need to feed my creativity. Inspiration is everywhere around us.

What directions are you taking your work into?

I will continue to meander along the fuzzy path of art and science. I am currently preparing a show with tattooed mushrooms. Further, I am planning a second edition of “Inoculum – Connecting the Other”- an interdisciplinary conference and exhibition, the first of which I curated at the beginning of 2016. And I am also waiting to hear back from a grant proposal that – if successful, it will fund a new work addressing the topic of human health in the future

(All photos copyrighted and courtesy of Theresa Schubert)