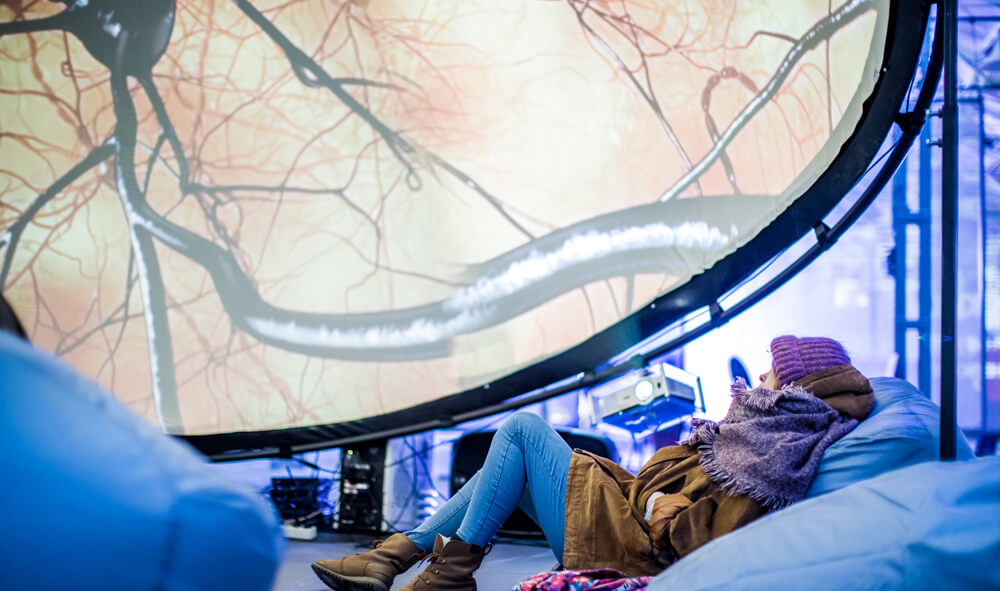 The HeLa cell line is an immortal cell line that is used in almost every molecular biology lab. HeLa cell line is remarkable because it was the first human cell line to grow well in a lab as the cells don’t die after a set number of cell division. Henrietta Lacks was an African-American woman whose cancer cells are the source of the HeLa cell line. Lacks’ cells were instrumental in advancing the latest scientific research and giving hope to hundreds of thousands of people suffering from the disease. The HeLa cell line, as well, has contributed to the development of the polio vaccine among countless other advances in scientific research. But also have become a controversial and sensitive matter as Henrietta’s cells were harvested without compensation or consent.

The IMMORTAL HeLa was part of UnTOUCHABLE Art Festival in Saint-Petersburg (Russia, 2017). Art Critic and Dramaturge Alina Shklyarskaya went deeply on describing how the installation is significant in the Russian scene in both areas,  the artistic and scientific. ‘Viewers enter the space of a dome theatre; while sat comfortably on the cushions provided, they get fully immersed into a 3D video projection experienced as a tunnel of human cells’, Shklyarskaya told us.

At that time (in the 50s) it was not required to inform patients and their relatives, so the [HeLa] cells were taken and harvest without the knowledge of Henrietta Lacks, who dies of cervical cancer in 1951. The installation is as well an ‘act of personification of the owner of biological material (cancer cells), participants witness the importance of their personal physiological and mental sensations. The installation empowers the viewers to make critical decisions about their lives, for example in taking more responsibility for their own health,’ adds Shklyarskaya.

One of the largest Russian innovative biotech companies using HeLa cells in its research is BIOCAD, a full-cycle drug development and manufacturing company. BIOCAD was invited to collaborate with artists on the installation The IMMORTAL HeLa, a performative, inclusive art and science installation that involves the use of real scientific data and materials.

‘Social and educational projects of BIOCAD are aimed at making people aware of the cancer risk factors and teaching them the importance of early disease detection. The public in Russia is scared of any mentions of cancer, which is one of the most significant problems of the Russian oncology.’ Told us scientist Aleksandr Karabelsky, PhD, Head of the Department of Advanced Research Projects, BIOCAD when asked about how BIOCAD got involved in the project. ‘One of the promoters of Untouchable Art happened to get a guided tour around BIOCAD laboratories, during which a lab assistant mentioned HeLa cells they used. In a couple of years, the promoters approached us with a proposal – to make an installation for the UnTOUCHABLE art festival.’ Karabelsky continued.

The biggest challenge BIOCAD faced was how to tell people about the scientific background behind the project in a language they would understand and to link this background to the oncology problems. Nevertheless, ‘collaboration with art and artist project makes possible for biotech and science-oriented company to reach broader audiences for our discovery to be relevant to society. Working with artists opens possibilities for more effective and enhanced communication of scientific results. The IMMORTAL HeLa helped us [BIOCAD] to raise the awareness, promote understanding, and generate an emotional response from the public.’