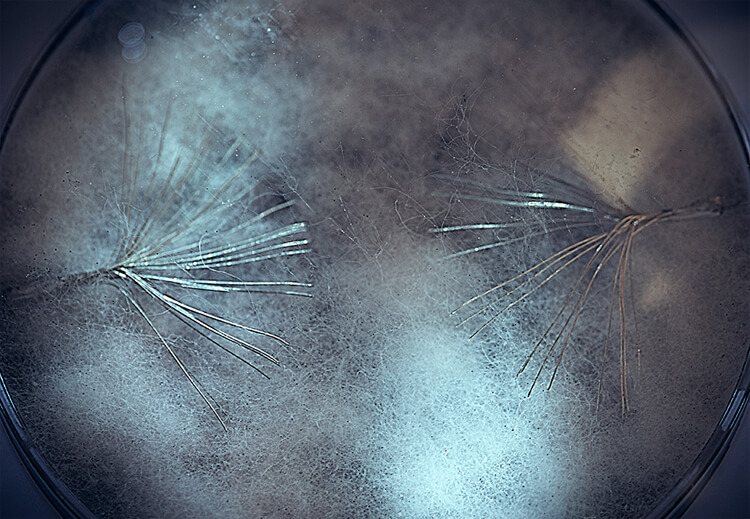 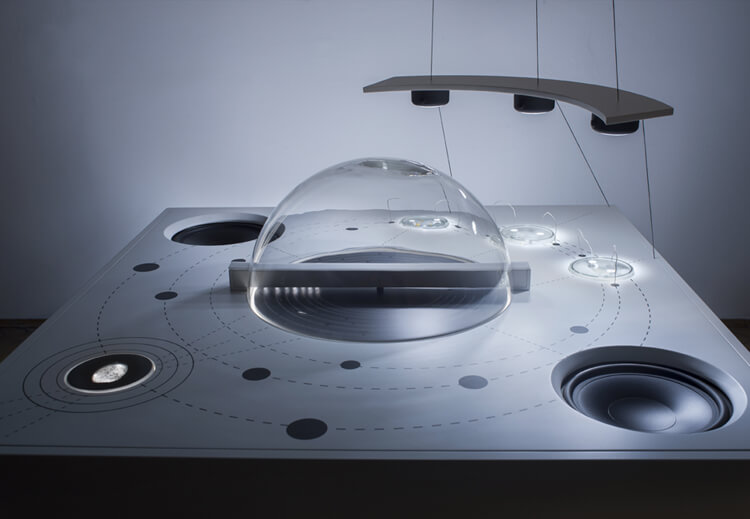 Living in the era of digital technology and art revolutions is leading to the appearance of new forms of dialogue that re-explore our relationship with media and artistic expression.

Slovenian-born artist Saša Spačal describes herself as a post-media artist, seeing her artworks as components of technological ecosystems that relate more with being human than with using old or new media. With an education in humanities, her research focuses on the fields of living systems, sound design, and interactive visualization. How technology shapes our lives and the human experience is at the center of her work, which develops around the idea of connections between the different systems as the major source of complexity in the environment.

Working in line with this interrelatedness of systems, Spačal challenges the human sensorial capabilities with works like Myconnect, for which she –together with Mirjan Švagelj and Anil Podgornik – received the Honorary Mention at Ars Electronica Prix 2015 and nomination at Prix Cube 2016. The work explores the symbiosis between fungal mycelium and the human body through sensory impulses connecting the two species in an unusually perceptible way.

Similarly, the project Symbiome – Economy of Symbiosis, in collaboration with Mirjan Švagelj, uses red clover plant and Rhizobia bacteria, as subjects to study the mutual relationship happening in the environment and the negotiations between the species to survive and benefit from each other; just as we all collaborate in the culture and economy of the ecosystem.

Spačal is a member of the Theremin Orchestra, where she performs interactive sound and visuals research, and she is very involved in community work. She holds workshops at the Biotehna – Platform for Art Research of Living Systems at the Kersnikova Institute, a non-profit cultural organisation promoting collaborative learning between participants from the fields of art, science, and technology. In cooperation with Ida Hiršenfelder, Spačal has created a platform for women with interests in science, technology, and media art; an admirable initiative to open and facilitate dialogue between female researchers.

As her professional career unfolds, Spačal grows to be a committed and influential artist whose post-media discourse intends to raise awareness of the effects of technological organisms on our evolution. 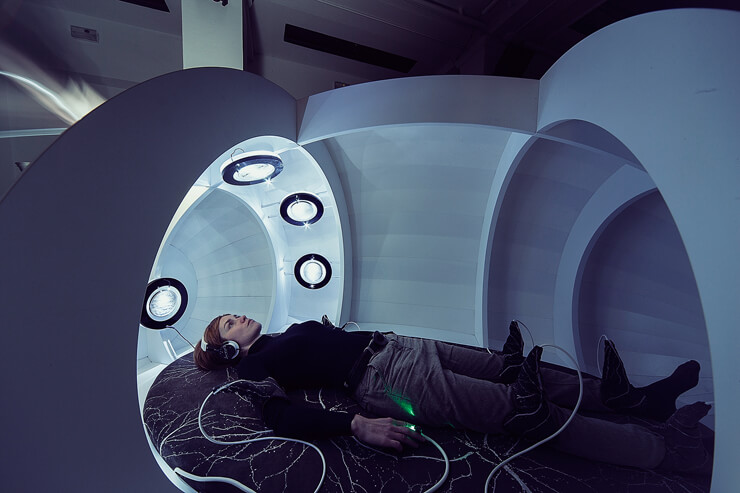 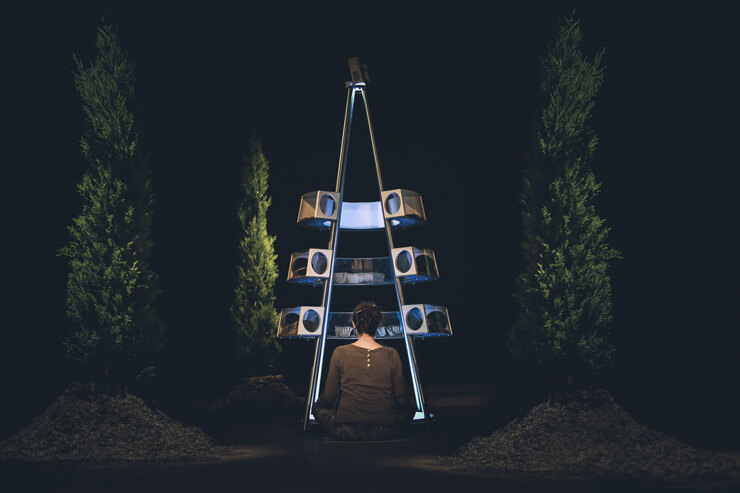 You have a background in humanities and are a visual and media artist, when and how did the fascination with biological systems come about?

To be honest, it is not just biological systems that I am interested in, I am foremost interested in the environment. A complexity of ecosystems where human beings play a part in co-creating them are plugged into them are dependent on them and not a species reigning on the top of the food chain.

Biological systems were, of course, the primary systems that I encountered when I was very young playing alone in forests for hours observing the worms under the wet leaves, listening to crickets, climbing trees, picking mushrooms, listening to the breeze in the trees, annoying scorpions and alike. It sounds romantic and it was, that is until I got my first computer ZX Spectrum. My environment expanded and life got new parallel dimensions while I was loading computer games from a cassette tape recorder and writing my first simple codes. Environment became the code. One of my recurring childhood dreams was that my life was a part of a forgotten scientific experiment still running on a hard disk in an enormous library of similar experiments floating on a space station somewhere in the universe. Scientists had forgotten about me, however, I just kept on evolving on my own as an algorithm materialized as a biological entity.

It was years later that I realized that it was already in that dream very obvious that life was a quality of not only biological but also of technological organisms. For example, evolution is not a concept that can only be applied to organisms but also to algorithms. In this respect, I understand all of the materiality as only an incarnation of a certain concept that can be constructed with hardware, software or wetware resulting in hybrid phenomena inscribed in mechanical, digital and organic logic.

My main fascination is the complexity of life forms and their interactions, connections that make up the environment. Time and time again when I look at my work I see one recurring theme: connections. I first realized this while I was writing an article about my work for the book Experiencing the Unconventional. Science in Art [1]. and conceptualized the idea of connections continuum. In my view, all of this systems – biological, technological, social, artistic etc – are closely interconnected and codependently intertwined in the connections continuum. Everything emerges and resides in the connections continuum on different planes however connected to everything else in the network. Our artworks are like organisms that are part of technological ecosystems that humanity built and as such, they cannot be realized with specific media, that is why I see myself as a post-media artist. Since our artworks emerge as a materialization of certain concepts, especially with the use of biological material, they do not always have the same representation or media in every exhibition.

In times when the Anthropocene period and human impact in our environment seem to be becoming a substantial reality, your work has a profound posthumanist angle. What are your artistic and intellectual aims under such perspective?

The realization that Anthropocene starting with the industrial revolution made enormous progress in the field of technological advancements but neglected and exploited our organic cohabitants and the planet in the grips of a capitalistic system, makes my artworks dream an electrical dream of posthuman ecology. Here the arborescent structures such as the tree of life do not exist and everything connects to everything else; here social, political, economic and environmental realities are not separate entities, but just different planes in the same network constantly negotiating the mutual use of resources and empowering each other.

There is a certain blindness in human beings that causes an inability to perceive the vastness and abundance of connections, that human beings are immersed into and rely upon on everyday basis. Therefore, I think there is an urgent need for connections to be materialized, experienced and discussed, so humanity will at least have a chance of survival in the future. The sensory experience is an important part of my work since humans are not merely intellectual beings, but have enormous sensory apparatus that absorbs information from the environment which constructs their reality.

The idea of intra-connectedness of everything that exists, including the human body that is very much integrated into the environment was materialized in two of our works Mycophone_unison [2] and Myconnect [3] that I built in collaboration with microbiologist Mirjan Švagelj, PhD and technical assistant Anil Podgornik.

Mycophone_unison is a sound device inhabited by microbiomes sampled from our bodies. Ecological communities of microorganisms such as bacteria, fungi, and archaea that constitute the human microbiome indicate the plurality of human body that can no longer be seen as one entity but as multiple. By pressing the fingerprint switch the viewer sends a signal to the map that processes it through the central celestial plate to the microbiomes that modulate it as a sound of unison. The multiplicities of the artists are heard as one for one brief moment in the here and now.

Human bodies in the ecosystem are not separate from their habitats, but just much more plugged into them, intra-acting with everything else. The boundaries of bodies defined by skin and identities that seem so clear in the Anthropocene era are now being put into question due to the limited nature of human perception. Moreover, even matter itself is not able to constitute the boundaries of the human body once the scale is small enough.

The work Myconnect that combines the ideas of intra-connectedness and symbiosis emerged as an aspiration to enable human beings to transgress their own species and connect with another at a perceptive and physiological level. Myconnect is a symbiotic interspecies connector that with its circuit of signals and impulses performs an immersive experience of interdependence between fungal mycelium and the human body. By entering the capsule a person is equipped with a heartbeat sensor, headphones and vibrational motors that are placed on various parts of the body. The heartbeat of a person sets off the system in motion. The signal travels through the mycelium where it is modulated in real-time. The modulated signal is transferred back to the human body via sound, light and tactile sensory impulses. These overwhelming stimuli that affect the nervous system cause an alteration of the human heartbeat. With the altered heartbeat, a new loop begins and the circle is closed. The symbiosis of signals begins.

My most recent project with Mirjan Švagelj Symbiome – Economy of Symbiosis [4] took the thesis of symbiosis further into the environment and suggested that the environment is not something external, but is generated in relationships and is a part of these relationships. Symbiome – Economy of Symbiosis, a miniature ecosystem, is inhabited by two biological species that nurture a symbiotic relationship: a plant of a red clover Trifolium pratense and a bacteria of the genus Rhizobium, a rhizobia. The greater the degree of symbiosis, the greater the flow of water drops, and the more intense are the ripples on the water surface. The ripples on the water surface are detected by a light sensor that translates them to sound. The sound is generated in real-time and filtered through phase modulation, which depends on the specific time-space. Symbiosis is not an idealized relationship, but a situation in which the species are continuously negotiating the mutual use of natural resources. The visitors in the Symbiome installation who exhale carbon dioxide, become remote actors in the symbiotic relationship. Bacteria initially enter the plant as parasites, but the relationship is then turned into a symbiosis due to mutual benefits. The rhizobia is then nested in the root system of the clover and develops nodules, while the clover provides them with favorable conditions for survival – with a home. Such a symbiosis can be understood as a metaphor for the economic relationships between natives and migrants who may benefit from each other only when relationships are based on reciprocity.

What was the biggest challenge you faced for the development of a particular project?

Every particular project is specific in its challenges, however as we work with living organisms the biggest challenge is always how to provide favorable conditions for plants, animals or fungi that inhabit our installations. There is a certain phase of the project when we get to know our new co-workers and establish interspecies relationships through various tests and experiments to see their reactions and decide on the best method to nurture them. One of the challenges for example, was how to find clover plants with nodules for the  project Symbiome – Economy of Symbiosis in wintertime.  Another challenge was how to establish proper living conditions for crickets in an audiovisual interface Syncness  [5] that I built with Slavko Glamočanin in an exhibition space with very low temperatures.

My work has several directions: living systems, sound art and community work. Within living systems research me and Ida Hiršenfelder are currently upgrading the work Sonoseizmic Earth [6] a responsive kinetic sculpture meditating on the relationship between humans and natural resources. With Mirjan Švagelj we are making first experiments for a new work that will include the sense of smell as one of the main immersive mediums, definitely a new field of research for me that I am really curious about. Another direction is an audiovisual perfomance with Slavko Glamočanin that will involve sound research that I do as Agapea . For my community work I will be conceptualizing and mentoring workshops in the framework of ČIPke initiative, an educational and production platform for women with a touch for technology, science and art, that I coordinate with Ida Hiršenfelder.

(All pictures courtesy of the artist)