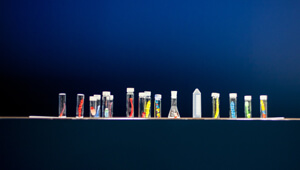 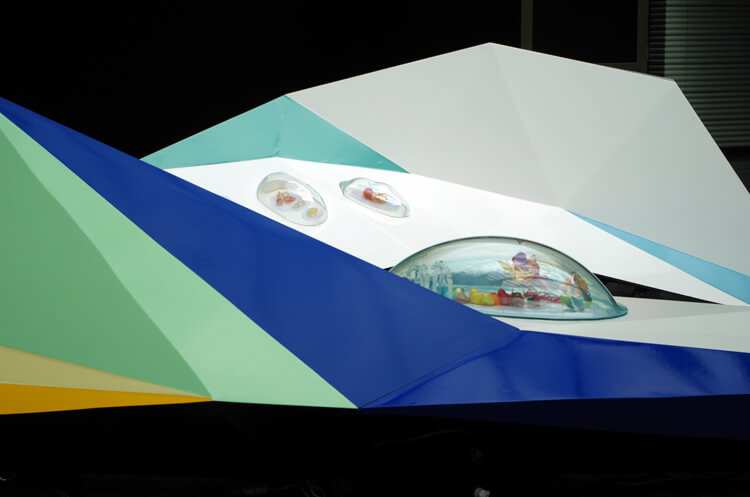 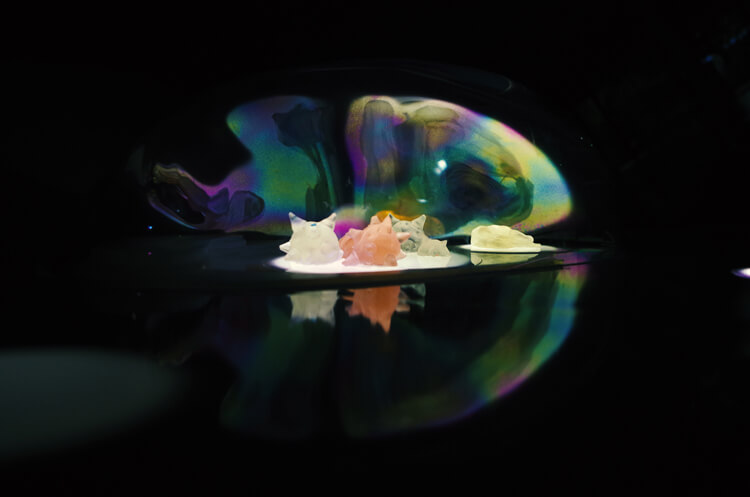 Pinar Yoldas is one of those artists that makes you question the future and what it might entail. Her work draws on her cross-disciplinary career, which is no less impressive than her academic background, is a campaign to bring change to the world. As an artist, researcher and designer, her work is a unique blend of biological sciences and digital media technology that reflects on the post-human in the age of the Anthropocene.

Assuming disastrous human influence on ecosystems and the environment, Yoldas’ work ponders how biological species could evolve to adapt to changing times. This is perceptible in one of her earliest projects, Speculative Biologies (2008), for which she created a series of biostructures that emulate tissues and organs of a fictitious new form of life. This new kind of life introduces  a different biological concept of sex and gender that could satisfy post-human needs. A similar approach is used in Designer Babies (2013), where she looks at how manipulation of the human genome that can lead to the genetic engineering of organisms with desirable traits. To do so, she alludes to a third layer of evolutionary change that adds to Darwin’s changing biological populations, and Mendel’s inheritance of genes.

In light of this “man-made” environment, and based on the Pacific Trash Vortex – the 5000 km2 patch of plastic,garbage and dead animals swirling in the ocean Yoldas models, in Ecosystem of Excess (2014), the life born out of this plastic waste soup, resembling the primordial soup from which the first organic molecules and living organisms are thought to have originated. For this provocative project, she generates new and post-human biological systems; ranging from organs that have adapted to sense, detect and metabolize plastics, to evolved creatures with particular environmental advantages.

Through speculative design, Yoldas generates debate within the throwaway society. Her thoughtful narratives prompt us to think of our relationship with the environment and how it is influenced by consumerism. Not least of all, Yoldas reminds us we may need to reconsider nature, and our position in the natural environment, for a better world. 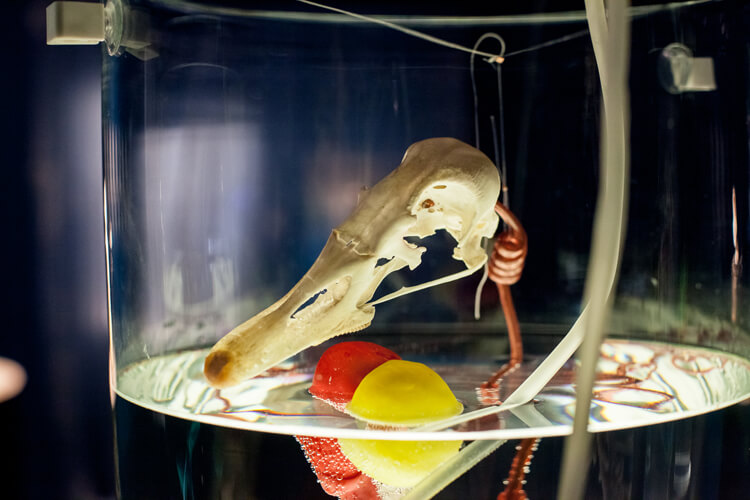 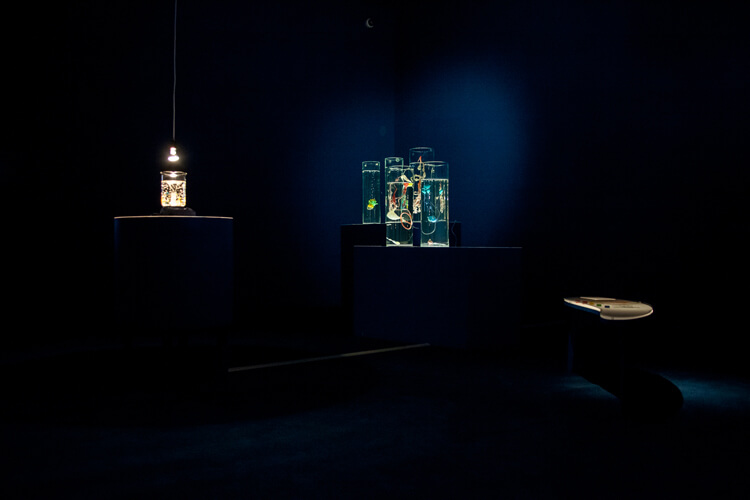 The conceptual frame of your work encompasses different topics; from biological science to digital technologies; what drew you to work at the boundaries of science and technology?

My approach to art is directly linked to my personal experiences. I’m the daughter of a physicist and an architect. I grew up with books on Optics and Architectural Digest, Detail, Japan Architect in our library. I was in the national chemistry olympics at age 16, and got a bronze medal, everybody wanted me to be a chemist so I studied architecture.

In architecture I wanted to bring my knowledge in chemistry and biology back to architecture for I had an idea for a living wall made with plant cells. I got stuck in academic boundaries between several departments and could not pursue my idea. Then I proposed a library (which looked like an enormous worm) whose nervous system retained knowledge, my instructors in the school of architecture failed me. I felt defeated and did other things, partying, generative computing etc. Then I woke up one day and I was like, I want to design organisms. I want to design faces. I want to design things that are beyond the realm of design.

One of the ideas behind Ecosystem of Excess is the notion of ‘anthropo-de-centrism’; could you tell us a little bit more about the intellectual process behind this idea?

There are many strong voices behind this idea. From science, conservationist Carl Safina and primatologist to humanities or critical theory such as feminist theorist Elizabeth Grosz. Anthropocentrism is the worldview in which human beings are superior to other living things by default. Anthropo-de-centrism problematizes the power dynamics between man and the rest of the world. Anthropocentrism is an ideology where some humans are subhuman and exploitable. Decentering the human, is a revolt against the heteronormative, western, white male in the position of power.

It is a question around redistribution of power, of wealth and of health to all persons regardless of class, gender and race embracing non-human animals and beyond. There is a binary around human/animal, decentering the human, erases or at least complicates this binary. Today we know many other species have cognitive functions akin to humans, from emotional processing to theory of mind, they display extreme levels of intelligence. Anthropo-de-centrism, is necessary for environmental justice and planetary health.

‘We are in the midst of the so-called sixth great extinction, the Anthropocene or the age of the humans’ (Science, January 2016). How do you imagine the future of the human species?

If this is a question about whether human beings as a species would perish or not, I would prefer not to respond. I am least concerned about the survival of our species. Sixth extinction is not about homo sapiens going extinct. Sixth extinction is about impoverished habitats, damaged ecosystems and loss of biodiversity (which involves a myriad ways of death for a great number of living things besides human beings.) Mass extinction is as the writer of Mass Extinction, Elizabeth Kolbert claims, a massively morbid topic. Again the criteria should never be survival but the quality of life. With big fish and cetaceans leaving our oceans, birds silenced during spring, increasingly surrounded by our own junk we sacrifice on the quality of life and our own happiness.

I am a versatile thinker and agile maker. I would like to keep working on the subjects I had been interested in specifically the brain, bio-tech, ecology and toxicology. Lately I am more and more drawn to moving image and text. We will see where that takes me.

What is your chief enemy of creativity/creation?

Being highly creative but independent, in that I do not work for a corporation or an institution and I only pursue my own projects, taught me that “everything kills creativity.” So everyday then is a battle against everything. Dr. Ken Robinson beautifully highlights in his record-breaking talk ‘Do Schools Kill Creativity’ (40million views!!!).

“…What TED celebrates is the gift of the human imagination. We have to be careful now that we use this gift wisely and that we avert some of the scenarios [ climate change ] that we’ve talked about. And the only way we’ll do it is by seeing our creative capacities for the richness they are.”

When we are young, we are malleable, we have more synapses in our brains than we actually need, over time, with repetition and exposure, our brains prune and find their close-to-final form. One can think of how our brains are shaped with an analogy to terraforming. Rain gathers, forms small springs, which turn into rivers, which carve out the earth to make canyons and such. The analogy between rivers and synaptic connections in the brain is not so wild given the fact that brain science has now shown us how water molecules travel in our brains thanks to Diffraction Tensor Imaging. Stunning.

These rivers in the brain however, unlike an actual river, can change fast making connections to neuronal rivers above and below, forming a most complex 3D structure. A thought let’s say could be a canoe in a river. Creativity is simply the ability to ride multiple canoes at once, or having the mental agility to jump between multiple canoes, and rivers to ‘create’ new connections. When I watched this talk 8 years ago, I was a minted graduate from yet another school, UCLA’s Design|Media Arts.

Having been labelled as highly gifted, I had had done my best to find AND finish schools that seemed to offer a healthy platform to explore and nourish this so-called creativity. Not to mention, creativity although mostly associated with the arts, is a requirement for science ( hard or soft ), engineering, philosophy and even religion. Creativity must be nourished.

After spending years at schools where Robinson aptly states kills creativity, my creativity was crumbled but there, albeit being tamed, rejected, skewed, distorted and even sometimes abused. At first I agreed with Dr.Robinson, everything was the fault of our education system. Then I realized that it’s not just schools, but offices, work environments, hospitals, supermarkets, all media, even academia or art institutions themselves kill creativity, everyday. We are -as a society- drawn to the familiar, mediocre and controllable, whereas true creativity dictates risk taking, novelty and a healthy dose of chaos.

This conclusion came as a result of my personal journey, with academics, arts, grants, applications, interpersonal relationships. Our societies, full of “individuals” who are pretty much clones of each other, prefer cliché over fresh, widely-accepted over what if. We form tastes, likes, preferences, and stick with them, whether this is buttholes, boobs, cocks, lean bodies, long sleeves, jeans, brands, all of them,  a certain type of music over another, our lifestyles, all the objects in our lives and the materials they are built from etc etc. Our notions of beauty, taste, health and wealth tend to be leaning towards mediocre, not cutting-edge.

Are we  curiosity and passion, but rather conformity and laziness? Therefore when I see a shooting star, I have one wish: May we all live a life full of creativity.

I have learned to live without. Yet my family, friends, my projects and this never-ending process of learning,  creation and sharing makes life much better. Oh and mocha ice cream, once a year!